Last year, Iowa didn't get enough snaps. This year, if offensive coordinator Greg Davis has his way, they will get more than they could have ever hoped for. "I was at home, watching some of my old VHS tapes of Def Comedy Jam when it hit me: the best way to get more snaps was to give more snaps," said Davis. "That's when I started working seriously on my best disses and burns."

Davis says he then commenced on a months-long process of taking his notebook of insults to comedy clubs around the country. "I was doing a lot of recruiting trips out in Ohio, Pennsylvania, New Jersey, New York, so it was convenient to take a few minutes every night and really hone my craft. I worked at Hilarities in Cleveland, the Laff House in Philadelphia, the Improv in Pittsburgh, and of course Banana's and Caroline's in the New York area."

The coach's goal, he says, was to come up with a solid half hour of high-quality insults. And he wanted them to all be specific to Iowa's offensive unit. "This was always meant as a practice tool, so I needed very specific rank-outs to lay down on my players. It was tough coming up with enough really solid zingers, but the hard work was worth it. You should see how much faster these guys move when I pick up the mic and start busting on them." 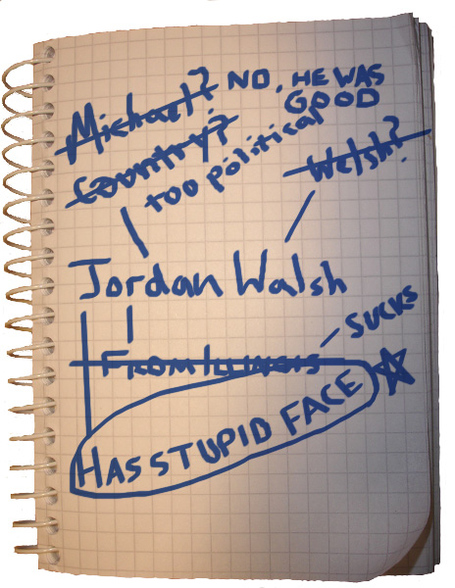 "Coach Davis is ... man, he's vicious," said junior running back Mark Weisman. "You definitely want to pick up the pace and make sure he doesn't focus his laser-sharp wit on you." Junior wide receiver Kevonte Martin-Manley agreed, saying "when they catch us moving slow, the coaches give us a choice: run a complete circuit of stairs in Kinnick, or endure five minutes of Coach Davis's comedy. Almost everyone chooses the stairs."

"I guess I can be a little rough on the guys, but I always make sure to remind them it's all out of love. And our pace has been much improved this year, so how can you argue with results?"

The Iowa Hawkeyes start their season August 31st against Northern Illinois. Coach Davis will be appearing at the Riverside Casino May 16th-19th, with shows at 7 pm, 9 pm and 11 pm.

ADDENDUM: Coach Davis was kind enough to share some of his "clean" material, which we transcribed from an old spiral-bound notebook he gave us: