Eric Berry sent out the actual listing of songs Ricky Stanzi put on his mix. Yes, it's on CD. Yes, it's good. We listened to it song by song and took notes, because journalism.

If you'll recall, last week we found out that Kansas City Chiefs safety Eric Berry had been jamming out with our own favorite son Ricky Stanzi—or at least jamming out with Stanzi's mix tape, which we assumed was just a playlist he had put together on his iPod or what have you.

Mr. Berry has since followed up with the Internet by Instagramming the actual mix Stanzi put together. Behold: 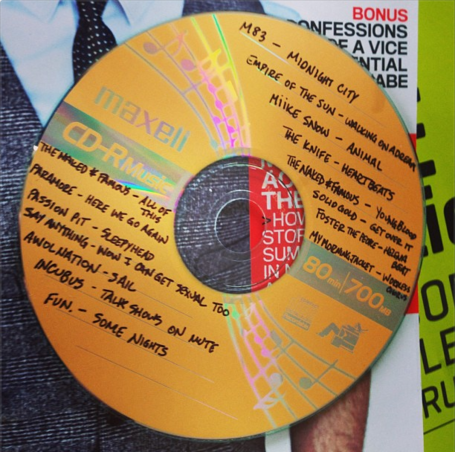 First things first: he burnt a CD. It is the year 2013, Stanzi makes over $500,000 per year, and he is a young person with access to all the latest technology. And he burnt a friggin' CD. I didn't know CD-Rs were even a thing anymore. Maybe he just had some left over from 10 years ago, as we all do if we look hard enough in our desk drawers at home. Anyway, that was the first thing that blew our minds.

Second thing? This mix looks, on its face, not that bad. We don't have most of the songs on it, but we see some that we like and very little that we don't.

But if High Fidelity taught us anything, it's that 1) we're a little tired of John Cusack's sadness face and 2) there is an art to the mix tape, and the arrangement is every bit as important as the song selection itself. Thus, we have compiled this very mix and will listen along to it song by song, with notes herein. This is the most important journalistic thing we have ever done.

Strong, strong opener. Hits you from the first note, demands to be played loud, and finishes with a saxophone so overtly sexual you would expect this guy to be playing it. This is one of my favorite songs and albums of 2011. Off to a great start.

2) Empire of the Sun - Walking on a Dream

Doesn't have the raucous energy of Midnight City, but isn't a letdown either; you're settling in here. Clocks in at a respectable 3:19, but ends at what feels like the middle of the song. Not the worst thing for the second song in a mix—they can't all have big endings with a sense of finality.

Another semi-electronic falsetto song—a motif is emerging here. That's good. You want motifs if you're putting together a mix, even if a group of Swedish dudes in skinny jeans has to be a part of it.

More Swedes with high voices and a drum machine! They also sound a whole lot like a band that comes later in the mix. Anyway, if you're not bobbing your head by the end of it, you are probably no fun. Still going strong.

5) The Naked And Famous - Young Blood

This mix has fully settled into a groove of summer songs, the type you listen to with the sun in your eyes. That's good. It's not summer, but it's damn close, especially in Kansas City. Still having fun listening to this mix.

Nothing profound going on in the lyrics to this one, but it's a fine next song down the line. No departure from the norm thus far, although if this kind of music isn't your cup of tea you should have abandoned this mix long before now. But it's our cup of tea. Yeah, hipsters write BHGP. Deal with it.

Pretty much the first foray into what old people and young morons call "real music," and the first real departure from the "foreign people with a drum machine" motif. And yet Jim James' falsetto game is pretty much the best out there and it's on full display here. Since we're getting into the second half of a mix, Golden might ordinarily be a better call (Wordless Chorus leads off "Z," for some perspective), but it wouldn't be a good fit on this mix.

9) The Naked And Famous - All of This

Some people are mixed on whether to include more than one song by the same band on a mix tape. I'm of the mindset that it's a dumb rule—especially if you're trying to put together a coherent mix instead of "these are 15 songs I like"—but that's just me. Anyway, very strong second-half song here, when you can start

Not just Paramore, but old Paramore. Hipster cred firmly established at this point. Fun fact: Hayley Williams was still 16 years old when this song was made, and she sounds twice that. In a good way. Anyway, highly underrated song, highly underrated band, totally fine with it here—it's a thematic shift from most of the mix, but that shift started with the My Morning Jacket a couple songs ago, remember?

When we mentioned The Knife (song 4) sounding like a later band, it was Passion Pit—obviously the vocals are different on account of Passion Pit has a dude and The Knife doesn't, but everything else is awfully similar. So it's cool to see that symmetry and callback from effectively half the mixtape ago. You see the alternation of "bands with drummers" and "bands with drum machines" coming into view, and that's kinda cool.

It's funny—we all see the name of the song, but it doesn't sound like sailing music at all. Christopher Cross is like "turn this noise off."

Ten years ago, there was a not-insignificant portion of people (mostly college students) who absolutely swore by Incubus. As in, they'd tell you with a straight face that Incubus was the best band out there. The weirdest part about it is that their other musical tastes were pretty straightforward—you couldn't dismiss them with a "yeah, but they like [insert annoying band here].' I never understood that. I didn't hate Incubus, still don't, but they sound like another alt band, and sure enough this sounds like another alt song. Which is fine, and it's not a bad song to put here.

Okay. Ricky Stanzi likes Fun. Okay. We can... we can work through this. We can get past this. Okay.

All in all, this is a very, very good mix, and although we appreciate the strategy of using the second half of it to work in some different stuff to take the mix to a different place—you can''t do a full mix of songs that all sound the same, because that gets boring—his choices would not have been our choices. Ah well.

Still, to be clear, we want Ricky Stanzi to make more of them and share them with the world. If he's taking requests, though, no more Fun. That's all.