A series of clerical gaffes and a tight construction schedule mean that the playing field at Kinnick Stadium will be the brand new scoreboard during the 2013 season.

IOWA CITY, IA — Two weeks after the Iowa state Board of Regents approved a $9 million construction plan to overhaul the scoreboards at the University of Iowa's Kinnick Stadium, school officials reported that due to a "clerical error," the plan calls for the new scoreboard to be installed directly into the middle of the football field. 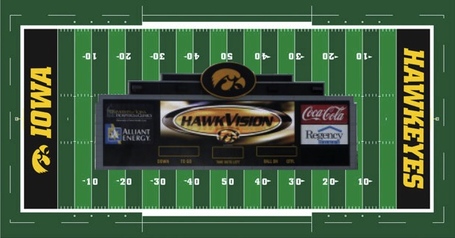 "I'm as shocked and disappointed as the rest of you," said Iowa athletic director Gary Barta. "I have been frowning all day long. I've been in athletics long enough to know that the scoreboard goes away from the field, and that it absolutely should not be the playing surface. Not even at Oregon."

According to administrators and engineers at the school, the problem arose when 2009's application for procuring FieldTurf at the stadium was copied into the new application and the word "FieldTurf" was simply replaced by "new scoreboard" as a time-saving measure.

"Our last application was so successful, the intern in charge of writing the application used as much of the language as possible so as to maximize our chances of approval this time around," said one source close to the process. "We did not think this cunning plan all the way through."

One Regent, Walter Fauxperson, expressed surprise at the decision-making process.

"We're the Board of Regents in the state of Iowa. Do you really think we're going to tell an athletic department 'no' any time soon?"

Fauxperson later confirmed that the application could have just been a crayon drawing of a scoreboard with the Tigerhawk logo and a football nearby, plus a random dollar amount anywhere on the page, and it would have been approved.

"They could have given us anything. Unfortunately, they gave us a plan to make everyone play right there on the face of the scoreboard. I wouldn't call it a farce of stunning proportions, but it was certainly inappropriate."

Administration officials would not comment on reports that the application was prepared by "Rusty," a family golden retriever to whom Kirk Ferentz gave an internship at the athletic department.

Unfortunately for Iowa, it's too late to go back on the plan now; the funds have already been procured and preparing a proper survey and cost estimate would endanger the scoreboard's readiness for 2013, and the urgency of the construction was a key component of the plan.

"We did say the old scoreboard was obsolete and we don't want to admit that's not entirely true," Barta said. "We gotta have that new scoreboard, whether it's where it ought to be or whether it's now what everyone is playing football directly on."

Further, the Iowa state Regents confirmed that they would not allow alterations to the plan since approval had final already been given.

"Once we rule on something, it's final, and we are adamant about that fact," said Fauxperson. "Admitting mistakes shows weakness."

The football program is adjusting quickly to the new challenges, implementing a no-huddle offense.

"We're trying to speed up the game," said quarterback Jake Rudock, "and also we're trying not to stand in one spot over the scoreboard for too long, because that might block some fans' views and we want to be hospitable.

"Also, we're pretty worried about getting tackled on the main video part of it, because it might damage the screen and that's expensive, so we're gearing our offense toward getting to the sidelines as quickly as possible."

Rudock confirmed that this updated play-calling strategy would be a minor adjustment at most.