A counterpoint to the prior article, taking issue with some claims and making other claims.

Share All sharing options for: OPINION: I Think Horses Should Play Human Football

My esteemed colleague recently took the position that horses should not be allowed to play the human sport of football, but to this must simply say: nay. NAY-Y-Y-Y-Y. Horses should play football, for seven reasons. 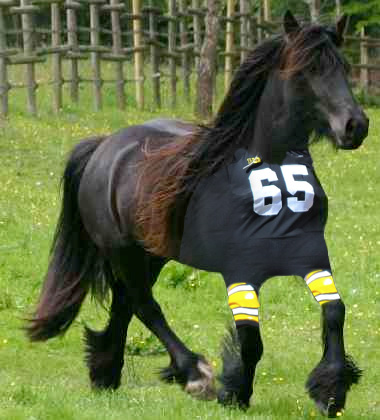 If there is one thing that plagues college football, it's the perpetual sameness of the teams that dominate the sport. Every year the college football world labors under the bridle of a familiar champion: Alabama, LSU, Oklahoma, Florida, etc. The rich keep getting richer in college football, and we need some spur to break the cycle. That spur is horses in football.

Underdogs are always favored by high variance events, and there would be nothing more variable than the behavior of horses on a football field. Alabama could have the greatest defense in the world, but if their cornermare Jean Stall-ings keeps cantering offside, any team will have a chance against them.

3) It will create jobs

For too many years, the job of horse wrangler has been in sad decline. Since the release of The Shootist in 1976, the Western film has been in decline, with only the occasional Unforgiven or True Grit to break the dry spell. This has made life very hard on the men and women who devote their lives to the task of training horses to follow directions. With horses in football, jobs for these trainers would be bountiful. Every FBS school would need their own trainer to make the horses line up and move on command. Salaries would skyrocket, until the best horse wranglers would be competing with the best offensive coordinators for highest pay.

The same could be said about horse veterinarians, horse groomers, and horse waste disposers (i.e. shovel men). All would be in greater demand once horses were allowed on the field.

In these hard economic times, we can't afford not to have horse football.

Every change in the rule brings surprising and innovative adaptations, and one can only wonder at what the best coaches would do with a horse at their disposal. Would horses primarily serve a blocking role? Could other players ride on top of the horses? Perhaps a new position would develop where the ball would be long-snapped directly to a man on horseback, who would use the distance between himself and the line to get the horse up to high speed. And this position would be called quarterhorseback.

The possibilities are endless.

5) It would end the charade of the "student athlete"

Mr. Jacobi is right: horses can't take classes. If we allowed them to play, however, it follows that we would be abandoning the principle that all players need to be students. And if players didn't need to be students, the justification for their amateur status would disappear; thus schools would be forced to pay their players (and horses) for their work. QED.

Girls love horses. Girls would love horses playing football. This could open college football up to a whole new fan base.

7) Horse names are fun to come up with and football would offer endless opportunities to make puns in horse names.

Here are just a few:

You could do this all day, and you would need to, because of all the horses that would be injured and euthanized at the end of games.
For all these reasons, I believe we should, nay, must hitch the wagon of college football to the harness of horses in football. Together we can all giddyap to a brighter future.