We got to see the Hawkeyes practice 2 weeks ago...now what are we going to keep an eye on this Saturday?

Spring practice is drawing to a close on Saturday in Kinnick Stadium with an actual spring game! The important stuff first.

[Updated] And there's this:

Switching things up this year. We will have a 4 QTR Scrimmage on Sat at 2pm inside Kinnick Stadium. Gates open at 1, Scrimmage starts at 2.

And the scoring system: 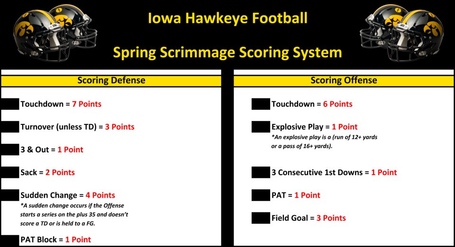 Two weeks ago we got a rare first look at the 2013 Iowa football team. Going into the West Des Moines practice, we had our eye on a few things. Now after seeing the squad live for a couple of hours, we've done our initial evaluations and gone over our notes and for Saturday's open practice there are few different things to key our eyes' on.

Have Beathard and Sokol gotten a better grasp of the offense?

Jake Rudock might be the least physically gifted of the 3 Iowa QBs, but it was obvious in the first open practice that he has the best grasp of the offense. He was efficient in the scrimmage portion of practice, while C.J. Beathard and Cody Sokol underwhelmed.

However, I was particularly impressed with Beathard during the drills. The kid has a very strong arm and looks like he has a large up-side. Sokol didn't look far behind throwing the ball and looked pretty smooth running around out there. So if either of the two can catch up on understanding the offense and making the right decisions, then this QB battle could really heat up.

I'll be interested to see if the coaches continue to use the every 2 snap rotation with the 3 QBs, or if one or two of the guys have separated yet.

Jordan Canzeri got a lot more work than Mark Weisman or Damon Bullock during the first open practice, but it was for good reason. He looked the best of the 3 on that day. He showed ability to burst through for a long run and to tough it out and fall forward. So the big question is if that was just a one day thing, or if he is really the best guy.

Weisman and Bullock are both known entities at this point, so again will probably get a lighter load on Saturday. I'll be watching to see how much more of the Weisman at FB personnel group the Hawks run. Maybe we'll start to see Weisman at FB and Canzeri as the RB instead of Bullock. Maybe all 3 of them on the field at the same time...Weisman FB, Canzeri RB, and Bullock in the slot. That's totally something Ferentz would do, right?

Will anyone other than the TEs catch the ball?

Riley McCarron was the surprise player that nobody had ever really heard of before he made waves in Valley Stadium. The rest of the WR group looked pretty lackluster. Kevonte Martin-Manley didn't really participate though, so if he's good to go on Saturday, maybe that will improve the group.

I think Jordan Cotton has potential to step up and be a good option for the QBs this year and like to see him be more consistent. I'm not holding by breath on Don Shumpert, but may keep a tally on the number of balls he drops. Tevaun Smith is the guy that I think may be the X factor this year. He's definitely fast and can get behind coverage. Maybe, just maybe, he can add a vertical aspect to an offense that so sorely needs it.

I'll be watching the tight ends too. Not because there is any battle brewing, or because I'm worried about who will step up. I'm going to watch them just because it is fun. It is a very solid group and should be, by far, the strength of the offense.

With Buford and Campbell gone, how does the secondary depth look?

I don't even know if Campbell practiced the other day and I'm fairly certain Buford did not. So the secondary probably won't be much different. I don't think either were really going to push for starting time, but maybe would have contributed on special teams on the nickle/dime packages.

But things are pretty thin at corner. B.J. Lowery will be good, but the rest is pretty unknown. Sean Draper got some good experience last year as a true freshman and everyone is high on Jordan Lomax who missed all of last year with an injury and hasn't even seen the field. So watching the second teamers, like Reese Fleming and Ruben Lile will be interesting, as it is very likely they'll see the field in some key moments this year.

I know I kind of obsess over it, but this tempo thing will have my attention again. In West Des Moines the offense rarely huddled. Most of the plays came in from the sideline with all the skill players looking over taking in the signal. Iowa rotated players in and out very quickly, and even rushed to the line after big plays and snapped the ball fairly quickly.

I remember last spring, the Hawks did show a lot of no-huddle, shotgun stuff during the open practice and I think we know all know how that went during the actual season. So maybe it is more just a practice thing...moving quickly to get in more reps. But I'm curious to see, especially if/when Iowa does do a long scrimmage portion of practice the tempo of the offense.

At the end of the day

It looks like the weather should be fantastic and it'll be great to be back in Kinnick for those who go. Plus this is basically it until August. So enjoy!