It's Not Plagiarism If You Link To It: Brian Ferentz and Reese Morgan Speak

Share All sharing options for: It's Not Plagiarism If You Link To It: Brian Ferentz and Reese Morgan Speak

IOWA'S LINE COACHES MET WITH THE MEDIA. Here is the full transcript and if you prefer, video. I'll summarize the weekly press conference with Iowa's assistant coaches Brian Ferentz and Reese Morgan:

Well, I would say we have been in the 21st century since Y2K. I bristle a little bit at the notion and I don't it's not personal. But I do bristle at the notion that we are archaic or that our head coach is I want to make sure I pronounce this right is it Luddite (ph)? Is that the correct pronunciation? Because he's not. He's got an iPhone and he's got an iPad. Twitter, that's a personal decision everybody makes. Coach Morgan is not on Twitter; I am. I think that's unique to every person. I really think if you saw our head coach on Twitter or doing those kinds of things, those aren't in his personality. That's not natural to him.

LET'S GET A CLOSER LOOK AT BOTH LINES IN ACTION. Marc Morehouse uploaded more video for Sunday's open practice in West Des Moines. Most of these are of the offensive line versus the defensive line in drills. Watch and see Brett Van Sloten pancake Drew Ott not once, not twice, but three times in a row.

C.J. FIEDOROWICZ CONTINUES A LONG IOWA TRADITION OF EXPRESSING HIS LOVE FOR AMERICA. Fiedorowicz spoke with the media following Iowa's practice Sunday about football and his new ink. Also, there's video of Jordan Canzeri, Darian Cooper, Damon Bullock and others on the On Iowa blog. C.J.'s tat looks like this: 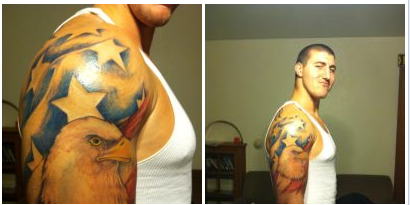 IOWA BASKETBALL RECEIVED THEIR SECOND PLACE TROPHY. It looks like this: 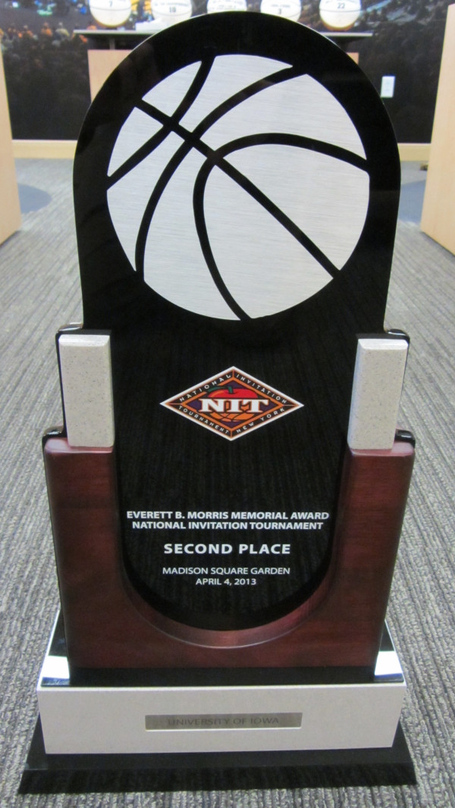 IOWA ALSO MAKES AN APPEARANCE ON JOE LUNARDI'S FIRST BRACKETOLOGY FOR 2013-14. It's waaaay too early for this stuff but hey, PAGE HITS! Any-who, the Hawkeyes are there as a seven seed. Seven seed is better than no seed.