Call it bad luck, call it nerves, call it fate, but Iowa can't seem to catch a break in close games. 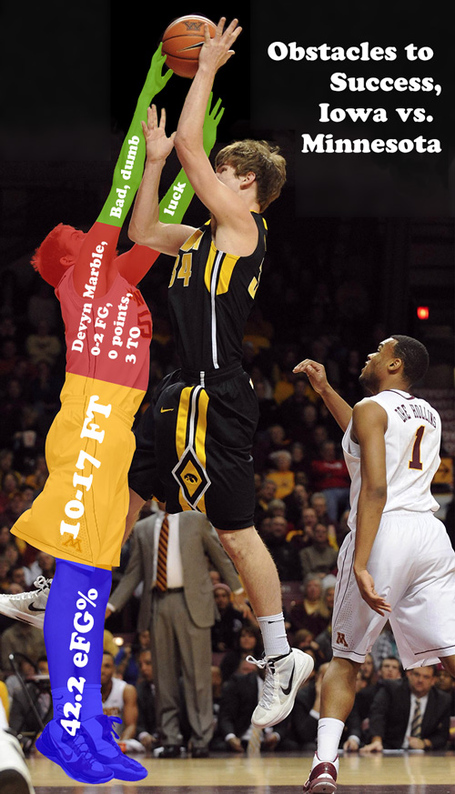 After watching this game, I was reminded of a statistic Ken Pomeroy has called "luck". Basically, it measures how far a team deviates from the number of wins they would be expected to have given their underlying offensive and defensive efficiency. Win a lot of close games (which presumably could easily go either way), and you're lucky; lose those same games, and you're unlucky. Right now, Iowa is the 279th luckiest team in the country (out of 347 total). All of which is what I keep telling myself to help cope with the Hawks losing this game that they really, really, really, should have won.

If you want to pinpoint just when fortune frowned on Iowa, look at the sequence with around three minutes left in the game. With Iowa up three, an Aaron White steal led to a fast break and three pointblank looks at the basket, all of which the Hawks inexplicably missed. When the third shot missed, Austin Hollins got the ball and passed ahead to a cherry-picking Rodney Williams, who dunked it to cut the lead to one. A four point swing in a matter of seconds is a pretty huge deal that late in the game, and even though Iowa was still in solid position to win the game with a minute left, that sequence kept Minnesota within striking distance. According to KenPom's win probability model of the game, Iowa's chances of winning went up to around 75% with that three-point lead, then dropped to 55% after the Williams basket.

And as miserable a play as it was, it was still just bad luck. If they ran that break a hundred times, it probably wouldn't happen 10 times. Likewise, when Mike Gesell missed the front end of a one-and-one a minute earlier, that was just bad luck -- if everything went according to his averages, he would have gotten at least a point from those free throws 76% of the time, and two points 58% of the time. And when the referee awarded Minnesota a timeout in the final seconds even though the player calling the time out was out of bounds (and had questionable possession at best), that also fits under the rubric of bad luck.

I feel it's important to stress the role luck played in this game, because apart from a bad first five minutes and a bad final three, Iowa played one of their best games of the year. They frustrated a very athletic Minnesota team on offense, kept the Gophers out of the paint and off the boards while at the same time holding them to just four three pointers for the entire game. They grabbed 18 offensive rebounds, had a higher offensive and defensive rebounding percentage than the Gophers (despite playing long stretches without a center due to foul trouble by Melsahn Basabe and Adam Woodbury), and generally looked like only the team on the court that had a cohesive plan and gave a crap. And they lost. That's frustrating, but I hope the team doesn't become demoralized after this loss, because they are right there. If they could just figure out how to start and end games, they would really have something.

About that starting games thing, this is data point #2 in the Woodbury-Basabe-White-Gesell-Marble starting five, and this is the second time that lineup has quickly surrendered a 10-2 lead to the opposition. It's too early to say anything conclusive about the lineup, but just from a theoretical point of view, the parts don't fit. There's not enough shooting, not enough passing ability, and too much size. You can see that it's not Fran's preferred lineup, because apart from the starts of the half, he very rarely has Basabe and Woodbury in together, especially at the end of the game. It's no doubt a touchy situation deciding whether Basabe or Woodbury should have the symbolic "starter" designation, but the team would probably be better off with just one of them in the game at a time. In close games like these, they can't afford to start so slowly.

As for the end of games, what can you say? It was miserable. Devyn Marble, who had been sitting on the bench for several minutes and who had had almost no impact on the game prior to that point, was suddenly called into action with less than a minute left, and promptly threw the ball out of bounds. Mike Gesell inexplicably failed to guard Austin Hollins at the three-point line on an out of bounds play (it looked like he expected Anthony Clemmons to switch on to Hollins), and then got the ball stripped from him as he brought the ball down the court. After a game marked by very few mental errors by the Hawkeyes on offense or defense (they had just eight turnovers heading into that final minute), the team made three massive ones in a row. I don't know if that's bad luck rearing its head again or some deeper form of nervousness, but it's becoming habitual for this team. Hollins made a great shot and a very quick-handed steal, and deserves a lot of credit for those plays, but Iowa also took their eye off the ball and made things much easier for him.

Marble's struggles are becoming a major problem for the team, mainly because there's no one else who can do quite what he can when he's healthy. There's no one that big who can handle the ball that well and can also make a jump shot if necessary, and that's kind of what you need in the no-holds-barred final minutes of a close game. Gesell is a good ball handler, but still makes mistakes, and he is not big enough or strong enough to create his own shot. Anthony Clemmons might be a little stronger with the ball, but has the same problems creating his own shot and is a worse free throw shooter. Eric May showed flashes of ability, scoring a crucial three point play with two minutes left, but he benefited from the fact that his defender had zero expectation that he would drive on the play. Beyond that, there's really no one with the skills to fight through the physical defense that you see at the end of games. So if Iowa wants to win these close games, they will probably need a bit of a cushion heading into the final minutes. Or they could just hope their luck changes.

On the season, Minnesota has made 442 two-point baskets, 121 three-point baskets, and 654 missed field goals. That translates to 36.3% of their possessions ending with twos, 9.9% ending with threes, and 53.7% ending with no points (ignoring the possibility of an offensive rebound). If we assume those percentages hold for the final shot, and we assume that losing the lead is worth -1, keeping the lead is worth +1, and a tie is worth zero, then we get estimate the expected value of the final shot:
EV(shot) = .363*0 + .099*(-1) + .537*(1) = .438
We can do the same thing for an Mbakwe trip to the free throw line. If things went according to percentage, Mbakwe would make both free throws about 36.7% of the time, miss both about 15.5% of the time, and make one of two 47.8% of the time.
EV(Hack-an-Mbakwe) = .367*0 + .155*1 +.478*1 = .632
That's making a lot of assumptions and ignoring the possibility that Minnesota could get an offensive rebound after Mbakwe made one free throw or something, but you can see that the Hack-an-Mbakwe strategy comes out looking better than allowing the final shot. And this is ignoring the fact that, from a theoretical point of view, the Hack-an-Mbakwe also has the advantage of guaranteeing Iowa the final shot, which the other option would not.
In other words, when Tubby Smith made the mistake of leaving Trevor Mbakwe on the court for the final possession, Iowa probably should have taken the opportunity to foul him. Even if you assume that going to overtime favored Minnesota, the Hack-an-Mbkawe strategy is still the better strategy, because the probability of the game going to overtime is virtually identical in both scenarios (36.3% in the first scenario, 36.7% in the second), meaning that whatever value we assign to overtime, it won't change which option is the preferred one.
Whew. That was a long digression, but I thought it was an interesting little strategical point in the game. Iowa hasn't shown themselves to be very good about playing with an eye to good end-game strategy thus far (they seem totally ignorant of the value of two-for-ones, for instance), so these are the kinds of situations they need to be thinking about and planning for.