It's Not Plagiarism If You Link To It: It's Hard Being A Hawkeye Fan

Share All sharing options for: It's Not Plagiarism If You Link To It: It's Hard Being A Hawkeye Fan

THINGS STARTED OUT WELL. It was like any other day really. Iowa basketball took their NCAA tournament hopes on the road to take on lowly Nebraska. They were a 6 point favorite to beat the (12-14) Huskers. The game was moved because of a snow storm that never materialized to the snowageddon it was predicted. The move bumped the game from TV and we fans scrambled for our fancy electronic devices to watch a grainy, 1990's Big Ten Plus-style production of the game. Iowa got off to a swell beginning. Meanwhile, Tony Ramos was getting a pin. Go Iowa! Awesome!

THEN THINGS TOOK A TURN. A real shitty turn. Mark Ballweg loses. Fran McCaffery's team forgot to come out of the locker room for the second half. The Hawkeye basketball team opened a 19 point lead in the first half and at one point, early in the second half, held a 16 point lead against a terrible Nebraska team. The Huskers chipped away and McCaffery's team tightened up. There was bad pass after bad pass, missed layup after missed layup. This can't be happening can't it? We already made all the jokes on Twitter.

What was once a 19 point lead was suddenly a three point deficit. Aaron White was able to tie the game with around a minute to play but, OF COURSE, Nebraska heaves a desperation three that finds the bottom of the bucket to put the Huskers up by three.

We suffered through this while simultaneously listening to perhaps the worst broadcast team in the history of the fake Internet television. That is, if you hadn't hit the mute button and turned on Dolph, or Yakity Sax. Whatever. That's it. Bubble burst. Mad again.

MEANWHILE. There's always Iowa wrestling though, right? Whatever momentum Iowa had following team points put up by McDonough and Ramos was quickly squashed. The Gophers suddenly were ahead 10-9 and never looked back. Iowa lost to Minnesota which eventually win the dual. Iowa would wrestle Missouri for third place later in the evening.

AFTER IOWA'S EFC. Things got chippy. Hawkeye media types took after one another. 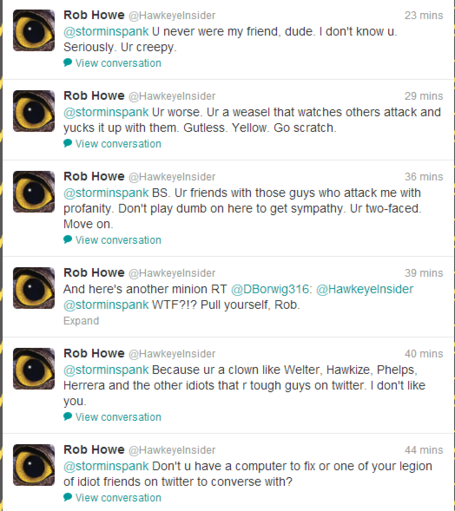 Yo Iowa..it wasn't an Alford problem..

AND THEN IOWA TOOK ON MISSOURI. They lost that too! Wrestling I'm talking about here! Iowa finishes fourth. There will be full recaps coming, rest assure.

AND TO TOP IT OFF. I turn on Wheel of Fortune, just to get a break from sports. The first contestant is some guy from Portland but he was born in Iowa City. He's wearing an odd black sweater over a black button up ensemble with a shiny gold tie. After the introductions and he tells Pat Sajak where's he from he adds a boisterous "Go Hawkeyes!" You know the rest. He fucking lost too. I can't escape it. At least not today. Sure, a few days will pass and we'll talk rainbows, unicorns and upsets over Indiana. But that's not today. Today, it's hard being a Hawk fan.