Iowa rings in the New Year with a border rival still finding its way.

Oh, yeah. It's basketball season, too. After a nine-day Christmas break, Iowa hoops opens Big Ten play tonight against the hated Nebraska Cornhuskers. Tipoff is set for 6:00 at Carver Hawkeye, with television coverage on BTN.

Nebrasketball enters the conference schedule at 8-4, with its best win over Miami (Fla.) and losses understandable (Creighton, UMass, Cincinnati) and not so much (UAB). The Huskers do three things well: They protect the ball, they force turnovers, and they make free throws. Nebraska is one of the nation's best teams at stealing the ball, swiping it away in one of every nine possessions, but doesn't do much else on defense. The Huskers allow opponents to make 48 percent of two-point attempts and rebound 32 percent of misses, both right at the national average. They foul at an absurd rate: Opponents are attempting one free throw for every two field goal attempts. 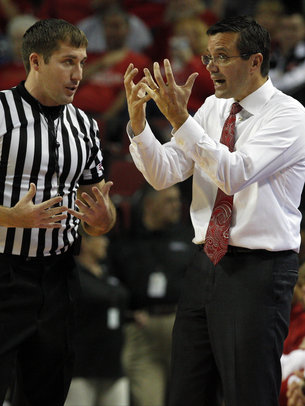 Offensively, Nebraska holds onto the ball but doesn't shoot particularly well. The Huskers rely on getting to the line, and do a great job of doing just that: Nebraska actually gets to the line more often than it allows its opponents, which is saying something. More than a quarter of Nebraska's points come on free throws, one of the highest rates in the country.

Nebraska starts and ends with a pair of swingmen. Sophomore Terran Petteway leads the Huskers in scoring (17.3 ppg) and minutes played, and is third on the team in rebounding (4.7 rpg), assists (1.2 apg) and steals (1.2 spg). Petteway is also one of three Nebraska perimeter threats, shooting 43 percent from behind the arc, and is an 87 percent free throw shooter. Shavon Shields adds 12.7 points, 5.5 rebounds, and 1.9 assists per game. They are joined on the Nebraska front line by 6'10 sophomore Walter Pitchford, whose production (8.4 ppg, 4.5 rpg) is modest for his size. Ironically, Pitchford is the team's third-best perimeter threat, making 40 percent from behind the arc so far. Junior forward Leslee Smith averages 8.3 points off the bench.

The Huskers' backcourt is led by senior shooting guard Ray Gallegos, who is scoring 8.7 points per game and shooting nearly 40 percent from three point range. Gallegos tied his season high with 18 points in Nebraska's loss to Cincinnati Saturday, and scored 30 in a game against Minnesota last season; do not take him lightly. Point guard Taj Webster (6.6 ppg, 2.5 apg) has a limited role. Junior guard Deverell Biggs (9.3 ppg, 2.8 rpg), who has missed three games this season for two different violations of team rules, will likely play Tuesday after missing the Cincinnati game. Junior combo guard David Rivers played a lot early in the season, but has sat for four of the last five games. Nobody is quite sure why.

It's easy to see how Nebraska can be a problematic matchup for some teams, a parade of 6'7 slashers who are just dangerous enough from the perimeter to demand respect and brutally efficient at drawing contact. Teams that need free throws to score aren't built for playing Iowa, though. The Hawkeyes simply do not let opponents get to the foul line, and unless this game is moved to Hilton Coliseum at the last moment, that should not change Tuesday night. Iowa might struggle to force Nebraska into turnovers and the easy points that come along with them, but Nebraska's tepid shooting and Iowa's massive rebounding edge should allow ample opportunity for transition points regardless, and Iowa's offensive tempo should take over. Tim Miles' Nebraska teams are 1-14 in games where their opponents score more than 67 points, and it's hard to see how anything less than a horrendous shooting night keeps Iowa from doing that.