GAME DAY INPIYLTI: How To Watch Iowa Vs. LSU In The Outback Bowl

Share All sharing options for: GAME DAY INPIYLTI: How To Watch Iowa Vs. LSU In The Outback Bowl

TONIGHT! TONIGHT! Fran McCaffery's Hawkeyes open Big Ten play with a New Year's Eve game hosting the Nebraska Cornhuskers. Tip-off is set for 6:06 PM (CT) and the game will be televised by the Big Ten Network. Iowa has the chance to get off to a hot start in Big Ten play. The Hawkeyes will head to Wisconsin on January 5th. After that tough match-up, the Hawks have Northwestern, at Ohio State, host Minnesota and head to a Michigan to play a Mitch McGary-less team and then another game with Northwestern. Hoops just got real.

NOW, TO TAMPA. The Hawks have been taking in the sights while visiting Florida. They've also taken time to visit with others:

Ferentz and Miles Meet With Media (via Iowa Hawkeyes)

THEY'VE ALSO BEEN BUSY PRACTICING. Thanks to Marc Morehouse, of the Cedar Rapids Gazette, we have practice video, news and notes (link one, link two). We see Jake Rudock moving around quite well, despite a hefty knee brace. We also see Andrew Donnal ahead of Jordan Walsh in the OL rotation. There's an interview with Greg Davis that's worth your time too.

It rained Sunday and that shortened Iowa's practice. Morehouse has video of Phil Parker talking Iowa defense. Dominic Alvis is healthy and ready to play. Alvis also talked about the time lost this season due to injury.

HERE'S THE DEPTH CHARTS. Usually, we look at just Iowa's two-deep. Hawkmania gives us both teams this week.

HOW TO WATCH. ESPN will have the coverage starting at noon (CT). The game is also available online on WatchESPN. You can listen to the game on the Hawkeye Radio Network (WHO 1040 Des Moines, 600 WMT Cedar Rapids). You can also check SiriusXM Channel 85 for satellite radio.

There's a small chance of showers (30%). Expect it to be overcast and a rather nice (from my Iowa window) 71 degrees. 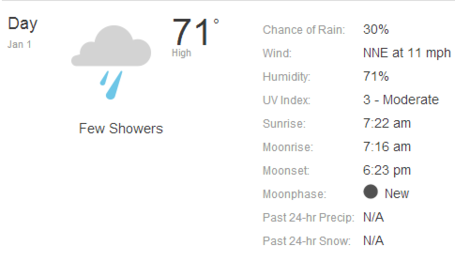 GOOD JOB HAWK FANS. As of last week, Iowa was 600 tickets away from selling their entire allotment of tickets. Officials, as of December 28th, expected more than 50,000 tickets sold to this year's Outback Bowl. LSU has sold a little over 50% of their allotment.

The spread is holding steady at LSU -7. Watch for line movements prior to kickoff. 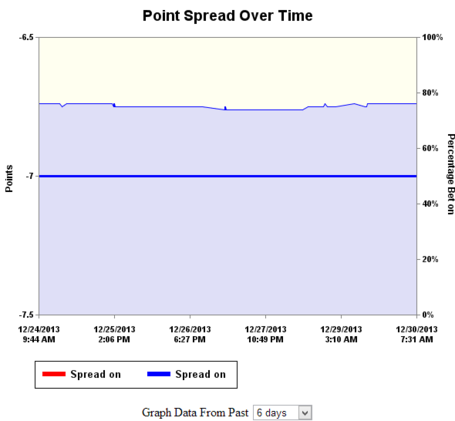 PREDICTIONS. It's bowl season so there's a ton of picks. Teddy Greenstein thinks Iowa is an easy call to cover the spread. Also, Dan Wolken is the lone writer at USA Today to pick Iowa. Most of what's around says LSU which isn't a surprise. Except our very own Marc Morehouse. He correctly called the Minnesota win when others didn't He called a Nebraska win too. He has his pregame advantages/disadvantages and predicts a Iowa 30, LSU 24.

MAS CASA ALSO GOES THREE AND OUT. He talks running backs. Mark Weisman needs just 63 yards to crack 1,000 on the season. Damon Bullock is Iowa's leading pass catcher out of the backfield with 18. And, Jordan Canzeri is averaging 83 yards per game in Iowa's last four contests.

STUDY UP SOME MORE ON THE LSU OFFENSE. Nicholas Moffit discusses LSU's most basic zone runs and sweeps. The zone, from the I-formation, should look familiar to Iowa fans.

WITH JENNINGS AT QB, THE LSU RUNNING BACK ROLES MAY CHANGE. LSU will still run their standard formations. They will also depend more on the running backs in pass protection. Senior Alfred Blue says they have to "think differently" with a freshman quarterback leading the offense.

THE HAWKEYES HAVE AN ANCHOR IN CARL DAVIS. He, perhaps, came to Iowa as a project and he'll leave a draft pick. Davis was 340 pounds when he arrived at Iowa. He's since trimmed and sculpted his body down to 310. He's had his share of injuries and set-backs along the way but this last season proved he can be more than just a contributor but a leader on the defense.

THERE'S ALSO JAMES MORRIS. Undoubtedly, the leader of this team, comes from a solid foundation. James' father is the equipment manager for Iowa. Here's an excellent read by Mike Hlas on James and his family. It feels like he's been around forever, having started his career as a true freshman in 2010. Still, I feel like I've never properly given James the credit he deserves. I look forward to watching him play his last game as a Hawkeye tomorrow, along with all the other Iowa seniors. The kid is all heart and a lotta bit of athletic ability sprinkled in. He's been a joy to watch and true example of what it means to be a Hawkeye.

FINALLY, SOME TERRIBLE NEWS. An Iowa couple was killed while driving through Georgia on their way to the Outback Bowl. Kenneth and Elaine Behrens, of Wilton, Iowa, were part of a family caravan making their way to cheer on the Hawkeyes. Our thoughts and prayers go out to the Behrens family.

TON OF OTHER LINKS:

*No Twitter list this time as for I will be around and updating the comments below with news and links as they emerge through kickoff tomorrow. Stick around, we have a lot to talk about.