Kirk Ferentz In Bowl Games Is A Solid Bet

Whether it's preparation or motivation, Kirk Ferentz gets his teams ready.

Share All sharing options for: Kirk Ferentz In Bowl Games Is A Solid Bet

KIRK FERENTZ TOOK OVER AS IOWA HEAD FOOTBALL COACH IN 1999. When Ferentz replaced legendary Iowa coach Hayden Fry, the cupboard was bare. It took two years and a (1-10) and (3-9) season before Ferentz got Iowa to bowl eligibility. In his third season, Iowa finished (7-5) following a 19-16 win over Texas Tech in the Alamo Bowl. In now his 15th season at Iowa, Ferentz's team is eligible for a bowl for the 11th time. He's won six of the ten bowl games played and has a (1-1) record in BCS Bowls. Ferentz has a (3-1) record in the Outback and Capital One bowls that pair Iowa with SEC opponents. He's (0-1) against the Pac-12, (1-0) against the ACC and (2-2) against Big 12 opponents.

THE 2003 ORANGE BOWL WAS IOWA'S FIRST EVER BCS APPEARANCE. It was a match-up of an (11-1) Iowa team versus (10-2) Southern California. Both teams featured Heisman Trophy candidates: Brad Banks and Carson Palmer (winner). Iowa's Dallas Clark won the Mackey Award given to the nation's best tight end and Nate Kaeding won the Lou Groza Award given to the nation's best kicker. Iowa finished Big Ten co-champs and Ferentz coach of the year.

For Iowa, it was a long break between the final regular season game which was November 16th. The Orange Bowl was played January 2nd.

In Miami, the Hawkeyes and Trojans went to halftime of the Orange Bowl tied at 10. The second half the Hawkeyes fell apart. USC's Palmer shredded a weak Iowa pass defense and the Trojans got Justin Fargas going in the run game. Banks and the explosive Iowa offense was out-of-sorts and never got going. Iowa had scored a special teams touchdown to begin the game and the only offensive touchdown came near the game's end with Iowa down 38-10. The final score would be USC 38, Iowa 17. For Hawkeye fans, the outcome reminded many of the Hayden Fry teams that flopped in Pasadena in the Rose Bowl.

FAST FORWARD. Now, ten years later, Iowa fans look to that game as the turning point for the Iowa bowl game approach under Ferentz. He's mentioned he's tweaked preparation and that bowls are a business trip. In fact, players and coaches often mention that mantra, "business trip." Ferentz is (5-3) since 2002 and were underdogs in each of the three losses. In fact, Iowa, led by Ferentz, has been tabbed the point spread underdog in all but one game, the 2009 Outback Bowl versus South Carolina.

Here's the historical point spreads for Iowa in bowl seasons under Ferentz (click to embiggen): 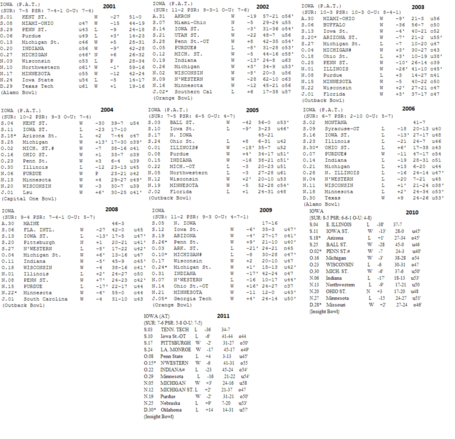 Kirk Ferentz is (7-3) in bowl games against the spread. He's (6-2) since the 2003 Orange Bowl. He's (3-1) in his last four games (the loss being Iowa's last bowl game versus Oklahoma), and he's (3-1) against the spread against teams from the SEC. In the five games Ferentz and Iowa won despite being underdogs, two were double-digit victories.

FERENTZ OFTEN MENTIONS THE CHANGES MADE FOLLOWING THE 2003 ORANGE BOWL TRIP. In 2009, Ferentz said about that 2002 year, "we lost focus a little bit as a team and it carried over into our preparation." He added, "we got caught up in taking some bows. Everybody was feeling good. We forgot it takes hard work." Following that game, the business trip mantra was born.

IS THERE A WAY TO MEASURE IOWA'S PREPARATION? Can we look at stats and determine if Iowa played above their norm? We know that Norm Parker did such a masterful job of shutting down Georgia Tech in the 2010 Orange Bowl that ACC coaches sought his advice that following off-season. But what about the other games? What about the offense? Let's take a look at Iowa's season statistics and the bowl game opponent's season stats and compare them to the bowl game stats from the last four appearances (2009 Outback, 2010 Orange Bowl, 2010 Insight.com Bowl, 2011 Insight.com Bowl).

Iowa entered the 2011 Insight.com Bowl against Oklahoma as a 14 point underdog. Gone for that game was Marcus Coker who had led the Hawkeyes in rushing for the season with 1,384 yards on 280 carries. Iowa started Jordan Canzeri, a freshman, who had nine total carries on the season. Canzeri rushed 22 times against the Sooners for 58 yards. Iowa was within seven points of Oklahoma after scoring twice in the fourth quarter. OU added a field goal with 2:28 to go and another touchdown to cover the spread with :45 seconds left in the game. Iowa's defense played well enough to win but the loss of Coker was too much to overcome.

Looking at these stats, Iowa's effort against Georgia Tech really stands out. Iowa dominated that game on the field but it still took until the fourth quarter to put the nail on the coffin.

Against South Carolina, the score was 31-0 going into the fourth quarter. In scoring 10 points, the Gamecocks also added 132 of their 313 total yards for the game. Ferentz got to clear the bench for that one as Iowa started the victory party early in Tampa.

In Iowa's wins they were able to run the football. They also played outstanding defense. The exception being Missouri in which Blaine Gabbert scorched the Hawkeyes. Ultimately, Gabbert threw an interception to Micah Hyde who scrambled and eventually turned it into points.

Going back further, Iowa was a nine point underdog in the 2006 Alamo Bowl vs. Texas. Iowa got out to a 14 point lead in the first quarter and held the lead until Texas scored a touchdown with seven minutes left in the third quarter. Texas' talent eventually won out but Iowa covered the spread easily.

There's not one stat you can point to and say "here, this is why Ferentz wins bowl games." It's about equal parts motivation and preparation. Iowa's destruction of Georgia Tech is the poster for Iowa's preparation for bowl games. While Iowa dominated that game statistically, ultimately, the proof lies in the final score.

Iowa takes on LSU on January 1st. The Tigers are currently a seven point favorite over Iowa. That's the third largest spread of Ferentz's 11 bowl games (Oklahoma 14, Texas 9) and LSU is without their starting quarterback and will replace him with a freshman with 10 career passing attempts.

The Hawkeyes may not beat the Tigers but if history is any indicator, a healthy Iowa team is a good bet in bowl season.