Yes, dear friends, we are doing a College Bowl Pick 'Em this year -- fear not.  You'll once again have the opportunity to prove that your prowess at picking winners in bowl games is superior to everyone else's ability to do the same.  And we're still using Yahoo! as the host for the pick 'em, even though I'm a bit cross with them about the regular season pick 'em (more on that in a bit).

Please let me know (in the comments, on Twitter at @RossWB or via email at bhgp.rosswb@gmail.com) if you have difficulties to signing up.

Meanwhile, I also need to (belatedly) update the final standings of our regular season pick 'em competition.  And the winner is...

UPDATE! Here's the graphic with the top 50 finishers.  Congrats to all. 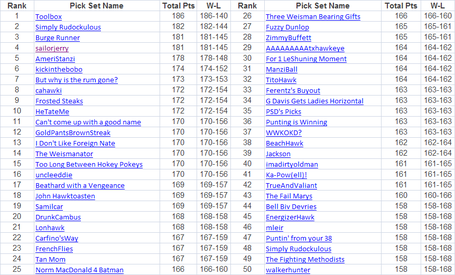 And here's the complete final standings.

As far as the aforementioned snafu with Yahoo!... I was under the (mistaken) impression that their game was only 14 weeks long.  I could have sworn that the game-picking screen only listed 14 weeks for most of the season and that Yahoo! also neglected to send out an email reminder prior to the abbreviated Week 15 picks.  I didn't realize there were picks to make that week until the week was half over.  That was very frustrating and I apologize if some of you thought the game was over after Week 14 and neglected to make picks in Week 15.  I don't think it made a difference in our ultimate winner -- Toolbox won by a pretty comfortable margin and most of the people closest to him did make picks in Week 15 -- but, again, I'm sorry that it wasn't clearer that there were picks to make in Week 15.  Mea culpa.

Thanks for participating in the BHGP College Pick 'Em game for the regular season; we'll do it again next year.  In the meantime, be sure to sign up for the BHGP Bowl Pick 'Em challenge -- it's one last chance to prove your picking prowess.

And, hey, while you're picking things, why not sign up for BHGP's World Cup Bracket Challenge?  You know you want to.  The World Cup isn't for another six months, but that doesn't mean you can't make way-too-early predictions.