What else would you wear for a Friday the 13th game against Iowa State?

IOWA CITY (AP) -- Iowa head basketball coach Fran McCaffery announced that Iowa would be wearing new gear for his team's hotly-anticipated Friday night showdown with the 17th-ranked Iowa State Cyclones.  The Hawkeyes, ranked 23rd in the latest AP poll themselves, will be brandishing new on-court gear for the game. 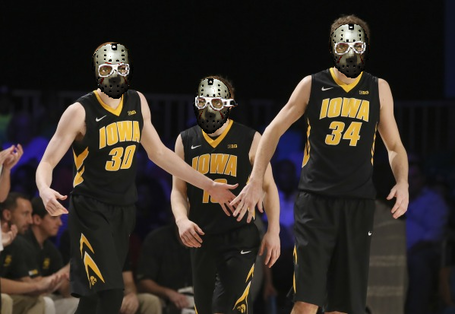 "Well, we saw on the calendar that the game was going to be played on the 13th of December.  And then we saw that the 13th just so happened to be a Friday and, well, we just knew that we needed to do something to commemorate it.  We've done gold rush games and blackout games and black and gold spirit games and we've worn throwback jerseys, so we figured why not wear some gear that's an homage to the greatest slasher movie franchise of all-time?

"Plus, we knew we needed to protect our faces for this game; we watched the BYU game film during our scouting sessions, so we know that DeAndre Kane and his fingers of fury can do to a face."

McCaffery indicated that the new gear didn't stop with the masks themselves, though.

"Once we got the masks we realized that they actually covered up everything but the eyes, which kind of defeated the purpose of our guys Kane-proofing their faces.  Luckily, Dev [Roy Devyn Marble, Iowa's leading scorer] had been watching some old Chicago Bulls footage and had a great brainstorm: just add some Horace Grant-style goggles over top of the masks.  Voila!"

McCaffery's support for the protective value of the gear was echoed by his players, most notably starting forward Aaron White, Iowa's second leading scorer.

"I'm definitely all for wearing some extra protection.  After what happened in the Bahamas [White sustained a black eye and a painful eye-poke during a physical game with Villanova in the championship of the Battle 4 Atlantis event], I don't want to mess around with fingers and elbows flying around my face."

McCaffery said he expected the gear to be worn only for Friday night's game.

In related news, McCaffery was uncertain if the team's newest player, a walk-on named J. Voorhees from Camp Crystal Lake, would be granted NCAA eligibility in time for the game on Friday. 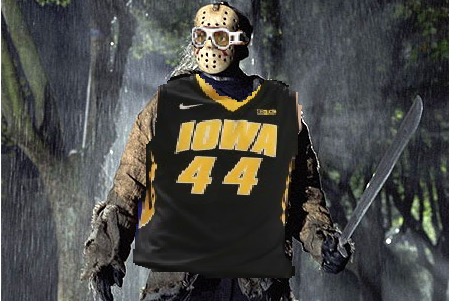 "Honestly, we're just not sure.  It's in the NCAA's hands right now.  We filed all the proper paperwork and he's ready to go on our end.  We  got him a jersey and everything.  From what I understand, the NCAA rules officials are checking to see if we can wear a blood-spattered jumpsuit underneath his jersey.  Oh, and they're checking on the whole machete thing.  I'm not real optimistic about that one, but you never know until you try, right?"

McCaffery indicated that Voorhees has been impressive in practice.

"Well, he knows the defensive schemes inside and out, which is great.  He has an uncanny knack for turning up right where you don't expect him to be and really disrupting things -- it's just unreal.  As far as his offensive skills go, his first step is just killer.  His cutting ability is absolutely phenomenal, too.  He can just slice right through a defense.  We're still working with him on his jump shot."

McCaffery indicated that the NCAA hadn't provided him with a time table for when their decision about Voorhees' eligibility would be made.