We're going on a tropical excursion. Don't drink the water.

Thursday's Battle 4 Atlantis opener could be fascinating: Iowa, which has played nobody of note through five games, against Big East newcomer Xavier, which has played Tennessee and, well, nobody else of note.  The Musketeers are rated no. 30 in Kenpom as of Thursday, making them Iowa's best opponent to date by a factor of ten.  It's the stats-within-the-stats that should make this game so interesting, though. 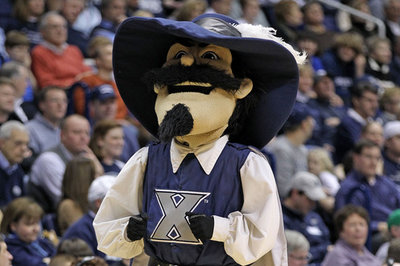 BHGP talks about Thursday's game with Banners on the Parkway

So far this season, Iowa has made its living by forcing teams into bad shots, dropping their field goal percentage to nothing, keeping them off the free throw line, and dominating the glass on both sides of the court.  Xavier has largely done the same.  The best matchup could be when Iowa misses a shot: Xavier is 10th nationally in offensive rebounds allowed, at less than 24 percent of missed shots.  Meanwhile, Iowa is sixth nationally in rebounds per game and recovering 41 percent of its own misses, which has made up for the Hawkeyes' relatively pedestrian 52 percent effective field goal rate.  Something is going to have to give; if it's Iowa offensive rebounding that goes, a large chunk of the Iowa offense could go with it.

The Musketeers are one of the nation's top shooting teams so far, making more than 56 percent of two-point shots and 39 percent from behind the arc.  They do not rely heavily on the perimeter game, getting just 18 percent of their points on three-point baskets.  Rather, this is a team of slashers, led by Semaj Christon (16.4 ppg, 5.0 apg).  The sophomore guard stands 6'3, but has an uncanny ability to create space in the lane to score or pass, and has to be Iowa's focus defensively Thursday night.  Freshman guard Brandon Randolph (6.6 ppg, 3.6 apg) is another drive-and-dish ballhandler, though he is not anywhere near the scoring threat that Christon is.  The Musketeers' usual point guard, junior Dee Davis, missed the team's last two games with a concussion but should be available Thursday.  He's the closest thing the Musketeers have to a perimeter threat.

On the front line, 6'10 center Matt Stainbrook is Xavier's second-leading scorer so far this year.  The Western Michigan transfer has a...how should we say it...interesting look that generated more than a few jokes when his transfer was announced. 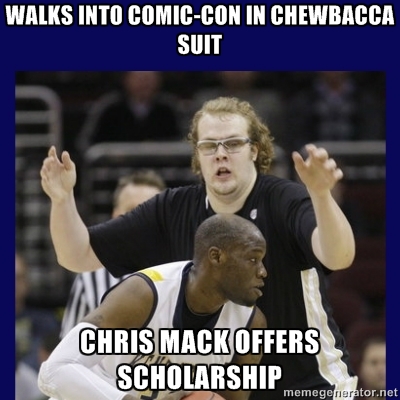 He does not look as much like Comic Book Guy anymore, but Star Wars fan or not, the guy's game is effective.  Stainbrook is averaging 10.2 points per game, hauling in 9.2 rebounds per contest, and blocking 2.6 shots.  As important, he's making 56 percent of his shot attempts, including a perfect 4/4 in 22 minutes against Abeline Christian, Xavier's final tune-up for the Bahamas.  Xavier could be without forward Erik Stenger, who was doubtful for the trip.  Stenger didn't score much, but he was an effective rebounder and defender that the Musketeers certainly need against the parade of forwards Iowa will send their way.

Where Iowa could regain their advantage is in pressure and tempo.  Xavier is not a high-tempo team -- they rank 197th in adjusted tempo so far this season -- and have not played anyone that runs like Iowa yet this season.  While the Musketeers have a solid bench and use it effectively, they aren't as deep as the Hawkeyes (Fun Stat: Due to their pace and the blowout nature of most of their wins this year, Iowa has used its bench more than any other team in Division I).

With its depth at guard, Xavier is not going to be run out of the gym, but Iowa could turn up the tempo just enough to exploit the Musketeers' one great offensive weakness: Turnovers.  Xavier turns the ball over on more than 18 percent of their possessions, a poor rate for a team with as many capable guards as they have.  Iowa's lived on turnovers and transition buckets this year, and should do the same Thursday.

If the game devolves into a half-court slog, Iowa's in trouble.  Xavier simply shoots better and executes more effectively in the halfcourt than Iowa, and a reduced number of possessions likewise works in the Musketeers' favor.  But if Iowa can force the Xavier guards to make mistakes, and if the interior defense makes it difficult for the Musketeers to score inside, the Hawkeyes should be ready for round 2.