GAME DAY: How To Watch Iowa Vs. Xavier And Hawkeye Football At The Nebraska Cornhuskers

Share All sharing options for: GAME DAY: How To Watch Iowa Vs. Xavier And Hawkeye Football At The Nebraska Cornhuskers

THE HAWKEYE MEN TIP-OFF TOMORROW NIGHT IN THE BATTLE 4 ATLANTIS. Here is the bracket with times (ET) and television coverage. (Source) 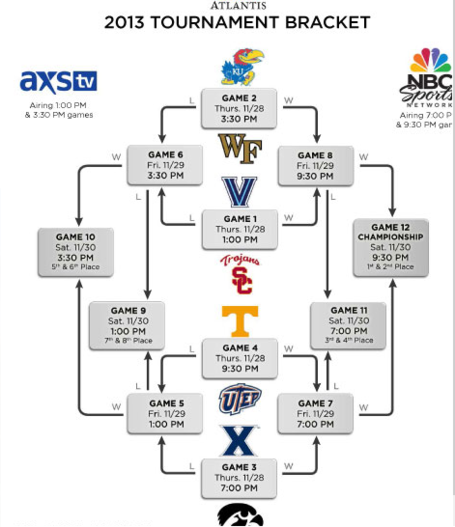 As you can see, evening games will be broadcast on the NBC Sports Network (formerly Versus). If Iowa wins, that's your channel for the weekend. If Iowa loses, well, I guess we'll all find out exactly what is AXS TV. Hawkeye Sports and the Hawkeye Radio Network will also have coverage. Tune into WHO 1040 in Des Moines or WMT 600 in Cedar Rapids.

IOWA MUST FIRST GET BY XAVIER. Tip-off is set for 6:00 p (CT). Iowa has faced Xavier twice and each team has won once. Check back for Pat's preview for the point spread and kenpom data. The winner of tomorrow's game will face the winner of UTEP and Tennessee tomorrow.

IOWA GETS RANKED. Fran McCaffery is too focused on the next eight days to celebrate Iowa's first appearance in the AP Top 25 in eight years. McCaffery calls this week a step up in class and even mentions a possible meeting with #2 ranked Kansas.

THE TEAM SUFFERED A SMALL BUMP IN THE ROAD.

THE HAWKEYE LADIES ARE ALSO PLAYING IN A WARM LOCATION THIS WEEKEND. While the men are in the Bahamas, the ladies took to Mexico to play in the Cancun Challenge. There's pictures of their trip. Iowa will play three games, according to Hawkeye Sports. The schedule looks like:

The Hawkeyes face USC on Thursday at 7:30 p.m. (CT), Boston College on Friday at 5 p.m., and conclude action against UNC-Wilmington on Saturday at 7:30 p.m.

TONIGHT, TUNE INTO THE BTN FOR A PIECE ON JAMES MORRIS.

FERENTZ HELD HIS WEEKLY PRESS CONFERENCE ON TUESDAY. Here's the transcript from the session with the media in Iowa City. I'll summarize:

And there's certainly more. Ferentz talked about Jake Rudock and Carl Davis. Click the link to read it all.

TELEVISION/RADIO. The television broadcast will be on ABC nationally. For radio, check out the Hawkeye Radio Network with Dolph and Ed on WHO 1040 in Des Moines or 600 WMT Cedar Rapids.

THE SPREAD. (Source) The line has stuck at Nebraska -3. The early money was heavy on Nebraska covering but it's trending back in Iowa's favor. 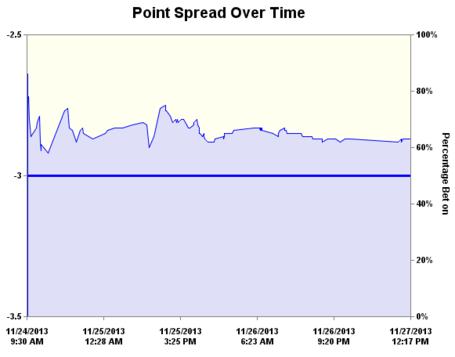 THE TWO-DEEP. Dominic Alvis is back but at second-string. He got just a handful of snaps last week and the expectation this week is probably the same. Alvis backs up Mike Hardy. Also included in this blog post from Marc Morehouse, new running back recruit, Markel Smith, says he's now qualified academically.

PREDICTIONS. Nebraska is the pick for national bloggers. All four of the participants in the weekly prediction post from the BTN take Nebraska to beat Iowa. Both bloggers at the ESPN Big Ten blog do too. There's one crazy bastard that's taking the Hawks and he's our crazy bastard. Marc Morehouse breaks down his advantages and disadvantages and says Iowa 27, Nebraska 24.

BO PELINI ISN'T COACHING FOR HIS JOB. The Huskers have had their share of drama this season. Bo Pelini was asked about silly Internet rumors and stepping down after the season. The Husker drama got started after a second half collapse against UCLA. It escalated when a tape emerged with Pelini saying "F--k the fans. F---ing fair-weather fans." He reaffirmed that he wants to be at Nebraska, that is, if they'll have him.