There's Hawkeye news. Read all about it.

THE HAWKEYE MEN'S BASKETBALL TEAM IMPROVES TO 4-0. Let's get right to the highlights:

Hawks Cruises to win against Abilene Christian (via Iowa Hawkeyes)

IOWA KILLS ANOTHER CUPCAKE. The Hawks should be all warmed up now after yet another blowout win. Roy Devyn Marble led the Hawkeye attack early on and Iowa cruised to a 103-41 win. Iowa scored over 100 points for the second straight game. They got some solid shooting behind the three-point line from Peter Jok in the second half to improve to 4-0 on the season. Up next for the Hawkeyes is Penn on Friday night.

MCCAFFERY TALKED ABOUT THE WIN. (Source)

LISA BLUDER'S TEAM IS ALSO 4-0. We also have ladies' highlights:

THE IOWA WOMEN DEFEAT STONY BROOK. It was true freshman Ally Disterhoft that led the way yesterday for the Hawkeyes. She led the team with 17 points and nine rebounds. Lisa Bluder believes the team's win over ranked Dayton last week has built momentum. They next face another ranked team when they take on Colorado Wednesday night at Colorado.

Iowa-Michigan football game next Saturday will kickoff at 11 am (CT) and will be televised on BTN. #Hawkeyes

THE WOLVERINES COME TO IOWA WITH A 7-3 RECORD. They got a last second field goal to send the game to overtime in Evanston. Through three overtimes, Michigan gained only 337 yards on 91 plays against the Wildcats. Michigan has had struggles on offense since conference play began. Here's a breakdown from MGoBlog of the Nebraska game. We can dig further into the game at Northwestern later this week.

SOME NCAA STATS. While Iowa had the week off, they still managed to move up in the NCAA season statistics. Iowa now is 9th best in the nation in total defense. The Hawkeye rush defense ranks 25th and the pass defense 10th. Iowa's scoring defense is 12th best in the nation and this week's opponent, Michigan, ranks 51st. The Hawkeyes are currently a 6.5 point favorite over Michigan.

WOMEN'S SOCCER IS ONE AND DONE IN THE NCAA TOURNAMENT. Still, a great season for the Hawkeye ladies. Here's the highlights of their last game versus Notre Dame.

AND FINALLY. I'd like to take this space to wish our in-state rival a very special congratulations. The Iowa State Cyclones pulled off a big win over #7 Michigan (ISU was favored at home by 1 point). The new basketball Top 25s will release today and both Iowa and ISU will be getting closer to breaking into the rankings. Over at kenpom.com, Michigan falls to #21, one spot ahead of Iowa. Iowa State climbs to #27. Wouldn't it be great if both teams could be in the Top 25 for the annual in-state battle in December?

Clones, congrats on your big win. 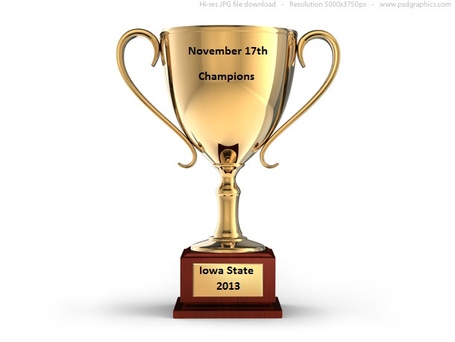