Let's Use Vine To Take Another Look At Iowa's Offense Vs. Ohio State: Three Tight Ends

Share All sharing options for: Let's Use Vine To Take Another Look At Iowa's Offense Vs. Ohio State: Three Tight Ends

THIS WASN'T ENTIRELY NEW. Iowa had used the three tight end package, the thirteen, before. But maybe not as often as they did in the first half against Ohio State. The Buckeyes were not prepared for the formation and Iowa put 17 first half points on the board. Only after adjustments and a desperate Iowa (after Carlos Hyde and Braxton Miller time) were the Buckeyes able to handle the Hawks in the second half.

Last season, I wondered if the new additions to the Iowa coaching staff would make Iowa a difficult practice prep for opponents. That advantage, if you want to call it that, never took, as Iowa, because of injury and perhaps lack of talent, became a one-trick pony on offense. Now, we're seeing what Greg Davis can do with preparing a game plan with a more dynamic set of skill players.

SO, LET'S LOOK AT THOSE THREE TIGHT END FORMATIONS.

The bigger bodies on the field mean better blocking in the run game. Iowa went with the one back and three tight ends and were able to gain enough yards on first and second downs to have a very manageable third down. Iowa was able to convert the short third downs and sustain drives keeping the ball out of Braxton Miller's hands. 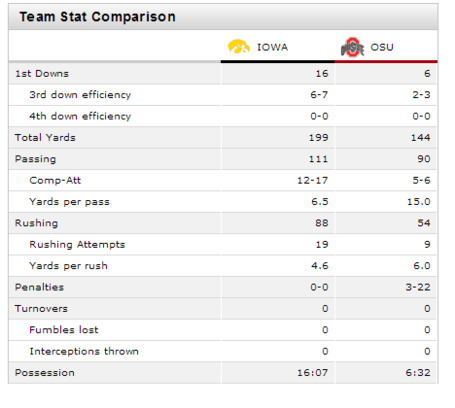 Here we see the play action. Jake Rudock has a nice fake to Damon Bullock and an easy roll-out to find Jake Duzey wide open. Duzey had an impressive game. His ability to get yardage after the catch will make his a valuable weapon for the Iowa offense moving forward.

Finally, we see the three tight ends with a different twist. This is Iowa's goal line formation. The wide receiver is removed in favor of a fullback. C.J. Fiedorowicz, like the play above with Jake Duzey, runs a delayed route off the line. He finds a hole and makes the catch for a touchdown.

These three plays are all from Iowa's opening drive against Ohio State. Iowa didn't run three tight end sets exclusively. There was a three wide set and the fullback lined up in the I-formation. Still, Iowa found success when they used two and three tight ends. Rod Gilmore called it "Big Boy football" and that's exactly what it was. Buckeye defensive line coach Mike Vrable said "They (Iowa) beat the shit out of us."

It was fun while it lasted but it didn't last the entire game. The Buckeye offense proved unstoppable and Iowa had to change the game plan to attempt to keep up. OSU's talent eventually prevailed but Iowa's offense showed us some things that can be successful against Northwestern.

The Wildcats come to Kinnick with the 87th ranked total defense. Northwestern ranks 72nd in the nation in rush defense. Wisconsin ran the ball for 286 yards against jNW a couple weeks back. Iowa looked at the Wisconsin game film to prepare for Ohio State. They'll use that tape from the Badgers 35-6 win over jNW to get ideas on how to score points this week too.