Not to be outdone by his own inconsolable basketball program, Jamie Pollard gets his designers to work on a 2014 football poster.

ISU spokesman: "I can assure you that our poster has nothing to do with last season at all... purely coincidental." pic.twitter.com/xJqywqTTDi

The poster, which shows Melvin Ejim going up for a layup over an anonymous defender attempting to take a charge, has a clear intent. As you may remember, late in the Cyclones' second-round NCAA Tournament game, Melvin Ejim was called for a charge on Ohio State guard Aaron Craft despite Craft's foot being in the restricted area under the basket. The charge call eventually led to a game-winning three-point shot by Craft and the end of Iowa State's season. Paul Rhoads was presumably both apoplectic and quite proud.

But Jamie Pollard was not satisfied with just a butthurt basketball poster. No, not by a long shot. The nation's most inconsolable athletic director also used the opportunity to unveil the Cyclones' 2014 football poster: 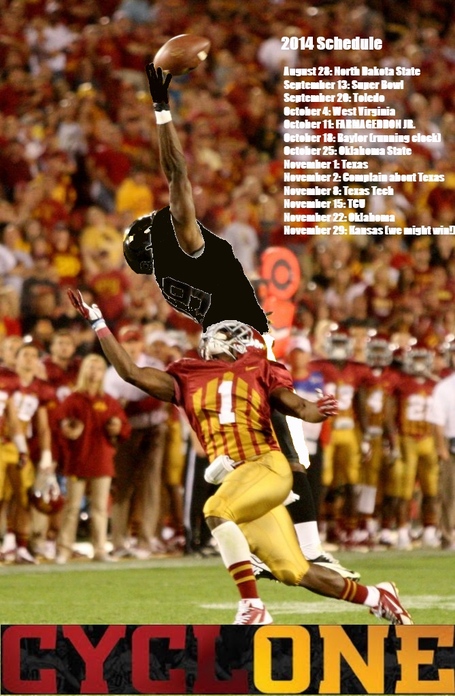 Reporters quickly noticed the picture was remarkably similar to B.J. Lowery's interception during this season's 27-21 Iowa victory in Ames, but a department spokesman denied the claim that it was a depiction of the play in question. "The poster has nothing to do with any events from this season. Nope, none at all," said a spokesman. "Just a generic football scene from a game where we were once again wronged by God himself."

"I mean, theoretically," the spokesman added.

The poster was released despite the fact that the Big 12 has not yet released the team's schedule for next season. "After the Iowa game, nobody really cares anyway," said the spokesman. "We could put the Green Bay Packers on there and nobody would notice."

Pollard was unavailable for comment. The spokesman indicated Pollard was busy canceling orders for billboard space that he had made during the third quarter of the Cyclones' game against Texas two weeks ago. "We might have jumped the gun on that one," he said.