A mysterious summer experience has transformed the fiery coach into the embodiment of bliss; Street and Smith downgrades Iowa's win-loss record in response. 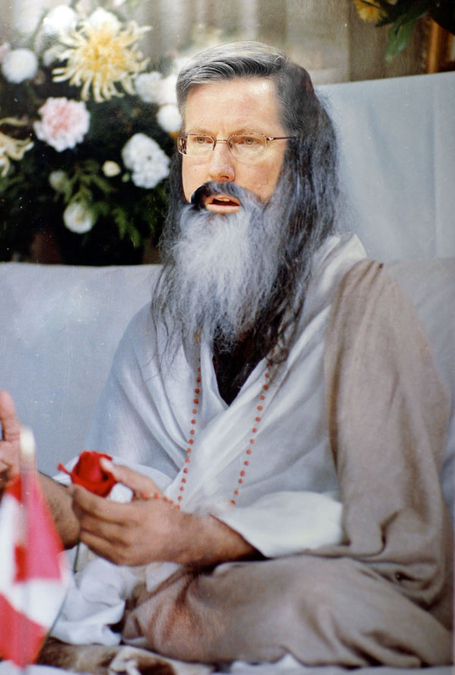 "This is the nightmare scenario for the Hawkeyes," wrote ESPN's Eamonn Brennan. "I could have seen them surviving the loss of, say, Dev Marble or Aaron White, but not this." CNNSI.com's Luke Winn concurred, writing "Without their red-faced field general nearly blowing a gasket every game on the sideline, I just can't see Iowa maintaining their trademark defensive discipline. Predicted record: 8-24."

Reporters first noticed a change in McCaffery at an open practice. In place of his usual team workout gear, McCaffery entered the team's practice facility draped in shining white robes, his normally clean-cut coiffure replaced by unkempt, shoulder-length hair and a scraggly beard. Observers reported a noticeable scent of incense surrounding the fourth-year basketball coach, as well as an "aura of transcendent calm."

"His appearance was odd enough, but I thought maybe he was playing a joke on us," said Cedar Rapids Gazette Reporter Scott Dochterman. "So we didn't say anything. Then the team started to scrimmage, and not too long into the game, Anthony Clemmons totally misses his defensive assignment. All us reporters cringe, because we know what normally happens next, but then the damndest thing happens... nothing. Total silence."

"That's when we knew something was wrong."

Instead of delivering one of us his trademark red-faced, spittle-flecked rants, McCaffery reportedly waited until a break in play, called Clemmons over, and said the following:

Clemmons looked at McCaffery in apparent confusion, then went back to the scrimmage.

"I'll give Fran this, though," said Dochterman, "Clemmons didn't make another mistake on defense all day."

It's not clear when the change in personality took place, although several sources indicate an August recruiting trip to Tibet as a possibility. Regardless of the manner of McCaffery's transformation, many in the coaching profession agree that his new-found beatific persona bodes nothing but ill for Iowa's basketball program.

"I've mellowed out considerably since I retired and started doing color commentary" said ESPN commentator and ex-coach Bobby Knight. "And I'm terrible at it! Have you listened to me drone on about the good old days? I'm insufferable. If there's one thing I've learned, it's that raw fury was the rocket fuel that propelled me to all my success. If Fran's lost that, he may be in serious trouble."

Knight's colleague Digger Phelps, who served as head coach at Notre Dame when McCaffery was an assistant, concurred. "For some coaches, say, coaches with an amiable manner and a fun nickname like 'Digger', anger isn't such a big deal. But Fran isn't wired that way. He needs that motivation, that rage."

Phelps added: "Plus he doesn't have a wacky, goofy nickname, like 'Digger.' Maybe if he was called 'Mimsy' or something like that, he wouldn't need to get so mad, but that's just speculation. Or, maybe, 'Rollo'. Or – ooh – 'Scoop'. That'd work, too."

When asked to comment on the situation, McCaffery declined, saying only: "Does the farmer discourse with his crops? Does the smooth river stone give a sound bite to the stream?" McCaffery then seemingly floated out of the practice facility, a good three inches off the ground.