The first-year Iowa wide receiver disappeared from the Minnesota game after attaining a top speed of 28 mph.

Share All sharing options for: Damond Powell Stuck in 1955 After "Speed-related Time Incident"

Damond Powell caught the screen pass on the right side of the field and after a few crucial jukes, burst into the open field and began to gain speed. Leaving defenders and teammates far behind, Powell accelerated down the TCF Bank Stadium Field, streaking for a 72-yard touchdown pass that would give the Iowa Hawkeyes a 17-0 lead against Minnesota. But as Powell approached the endzone, the first-year Iowa wide receiver began to emit what observers called "blue sparks" and was enveloped in a "bright white light." Then, as the ball crossed the endline, Powell's corporeal form disappeared, leaving behind two flaming tracks and a large cloud of smoke. 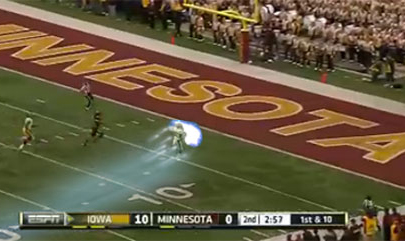 Powell shortly before his disappearance 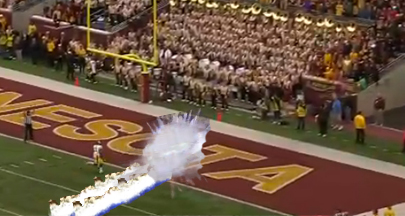 Until now, the player's disappearance was entirely unexplained, but physicists at the University of Iowa believe they now understand what became of the speedy Iowa flanker.

"We believe that Mr. Powell attained such a high level of speed that he went back in time. We've always known that it's theoretically possible, given the right conditions, for a football player to move through the space-time continuum, but until now, those conditions have never been met," said John P. Davis, an endowed professor of Chronophysics at the University of Iowa.

The conditions, described by Professor Emmett Brown in a landmark 1956 paper, include: playing in Minnesota on an artificial surface, achieving a speed of 28 miles per hour, scoring a touchdown, and causing a team to take a 17-point lead.

"At first we thought Powell had created the sparks and smoke through some combination of friction and the stadium lights heating the FieldTurf surface to a high temperature, but recently we uncovered evidence that Powell did, indeed, travel through time," said Davis.

Davis reports that, while walking by a display of photographs from the department's history – "one I walk by every day" – he noticed a picture he had never seen before: 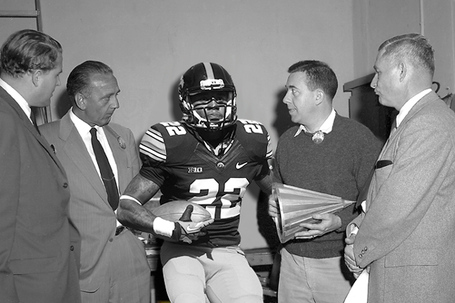 "It's a photograph of famed Iowa professor James Van Allen with several other physicists, including Werner Von Braun, and an unidentified figure that I believe is Powell," said Davis. According to Davis, Van Allen is holding a device that he believes is a "chrono-pyramid", a device that physicists have long theorized could transport a player through time without the aid of blazing football-related speed.

When asked how Powell's presence later in the Minnesota game can be explained, Davis had a ready answer: "Don't you see? Once Van Allen had developed his 'chrono-pyramid', it would be a simple matter to send Powell back to 2013, almost to the exact moment he left."

Head coach Kirk Ferentz has reported no absences on Powell's part. "Nope, Damond's been here every day in practice. Can't think of anything out of the ordinary connected with him, nope." After a long pause, Ferentz added: "Apart from that mysterious old man, Mr. Underarmour, who hung around the facility this week, dispensing wise advice... wait a minute."

When reporters pointed out that if Davis is correct, Powell's presence in the past would have potentially altered the space-time continuum, thus altering the past, the physicist dismissed these concerns. "You don't understand: it's a closed loop. What happened has happened. What will happen will happen. By going into the past, Powell became part of the past, and what we remember as our past has been subtly altered by his presence."

For his part, Powell discounts the entire story. "I don't know what you're talking about. Time travel, how preposterous. I'm a busy man, I don't have time to discuss this." Powell then proceeded to hurry away while consulting what appeared to be some sort of almanac.