Deep in the bowels of Carver-Hawkeye Arena, the top secret halftime entertainment committee is meeting.... 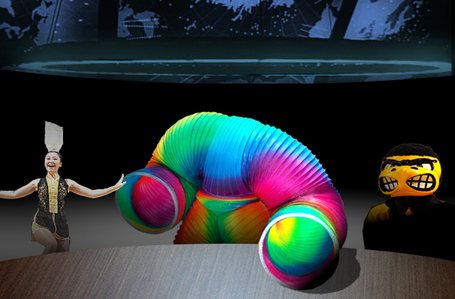 I say we bring back those guys who dunk off of trampolines. [Flips bowl on head]

I must bestow my imprimatur on the TNT Dunk Squad, for I find their aerial acrobatics to have an effect upon the audience as explosive as the trinitrotulene in their name.

A tall figure bursts into the room

What is this disturbance of the private council of halftime entertainment planners? [Flips two bowls on head]

Whoever it is, his stature is positively Brobdingnagian. 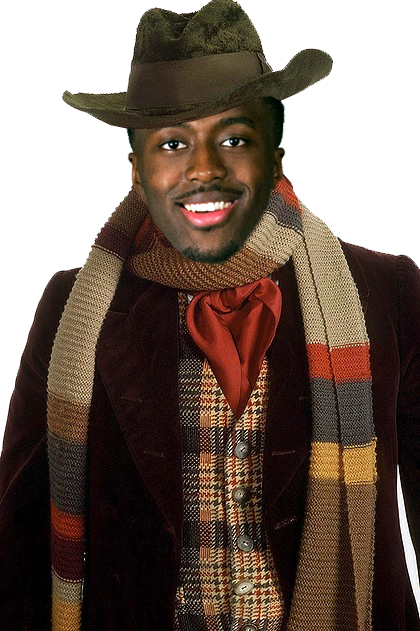 Gabe, of course. If you're looking for the practice court, it's just down the hall and up ten flights of stairs.

But I came to see you. It's about halftime.

Surely you don't have a problem with the entertainment? We hire only the finest acts who are willing to work for $500 or less. [Flips three bowls on head]

I know 20 minutes is a lot of dead time, but there are rules we have to follow ---

Balderdash! How capacious an interlude would you ask of us?

Where I come from, a proper athletic respite involves the taking of tea and snacks. It takes at least ten minutes for tea to steep, two minutes for it to cool, and another 14 minutes to eat the watercress sandwiches and other assorted dainties.

What do you do with the other 34 minutes? [Flips four bowls on head]

Discuss the political scene in the Ottoman Empire with one's opponents.

That may be how things go in England, but -- wait a minute, do you have a butler with you?

Naturally. Every English gentleman has a manservant to serve as chauffeur, cook, valet, confidant, advisor, etc.. Isn't that right, Oglesby, what, what? 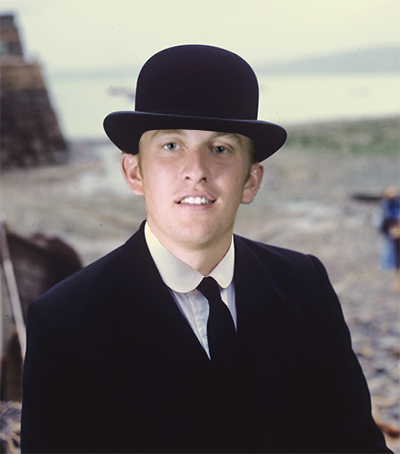 Josh Oglesby? Is that you? But you're a backup shooting guard for the Iowa Hawkeyes, not a butler.

That was my apprehension as well, sir, until Mr. Olaseni pointed out to me that with a name like "Oglesby" there was a high probability that I was, in fact, a butler, and if not, that I, in his words, "bloody well should be." His logic was impeccable, so since that day I have been under retainer as Mr. Olaseni's gentleman's gentleman.

Yes, sir, my apologies. With your permission I will take this opportunity to press your uniform.

Yes, yes. Go. [Oglesby departs] Servants should be seen and not heard, as far as I'm concerned.

So you want an hour long break to drink tea and discuss international politics with Tom Izzo and Adreian Payne?

Yes, or the behavior of the royals or gentlemanly club life.

And then the game would proceed as normal? [Flips five bowls on head]

Heavens no. I envision a comprehensive revision to make basketball a more gentlemanly, dignified pursuit. First, we would need to change the dimensions of the court. Instead of a cramped 94 by 45 rectangle, we would have a broad grass-covered oval measuring approximately 70 yards by 80. [Unrolls blueprints] 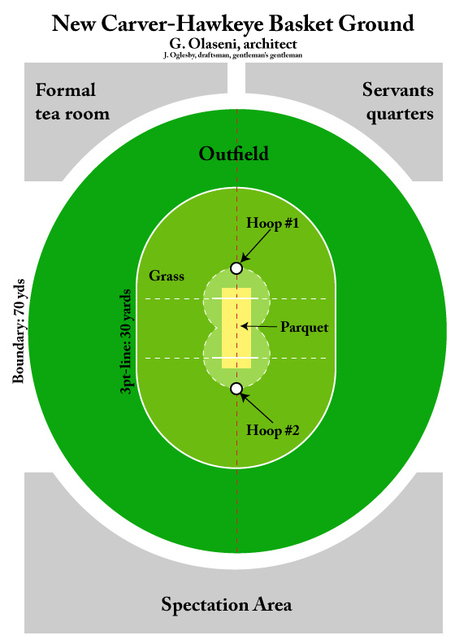 And instead of a helter-skelter competition for baskets, we would have an orderly series of encounters where defensive players would hurl or "bowl" the ball at the offensive player, who would then attempt to direct it into the basket with a long, flat wooden bat.

No. [Flips six bowls on head]

And games would go on for days at a time, with multiple breaks for tea and snacks.

No. You're describing cricket. No.

And naturally Carver would have to be torn down and replaced with a new outdoor complex with room for stands, a tea-serving area, and, naturally, servants quarters.

No, stop talking, no.

In fact, we could probably get rid of the hoops and even save money by using a smaller, harder ball. In fact, I brought a prototype. 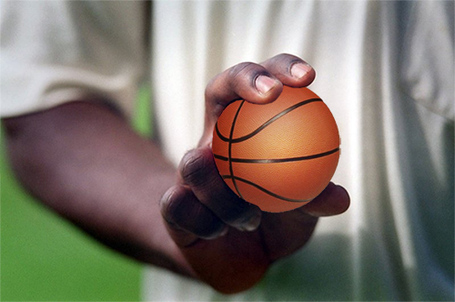 No. [Flips seven bowls on head]

And I haven't even showed you the new uniforms I had a teammate model for you: 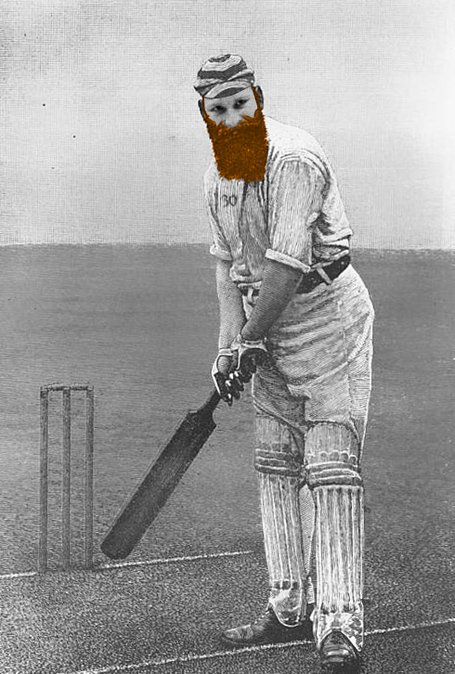 That's it. We're going to have to kill you. Release the fly-ball dogs!

Egads! I'll evade them by running down this long hall way. 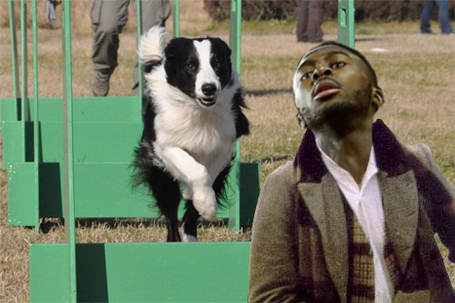 Drat. The door is locked. I'll just run to the other end. 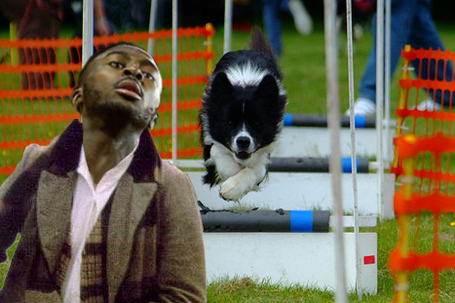 Locked again. what about the door? 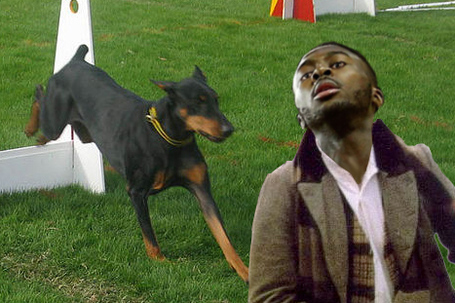 Damn my luck. It's locked! 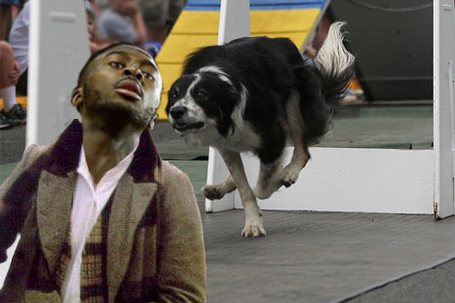 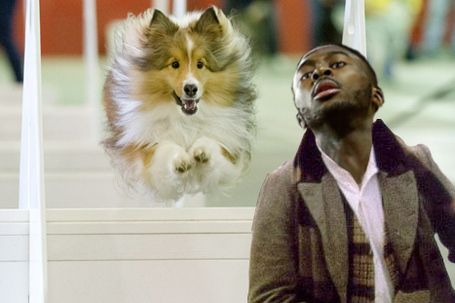 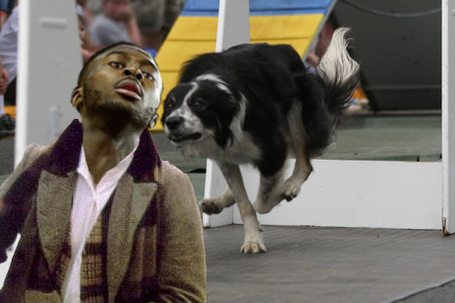 Locked again! These dogs are indefatigable. Why won't they tire?

If I may make a suggestion, sir...

Oglesby! Thank goodness you're here. I'm in quite the pickle. These blasted canines won't cease their incessant chasing.

Yes sir. The problem is that you have inadvertently recreated their natural milieu. They won't stop running until you give them that which is their raison d'etre.

The ball in your hand, sir. That's what they are after. Get rid of it, post haste! 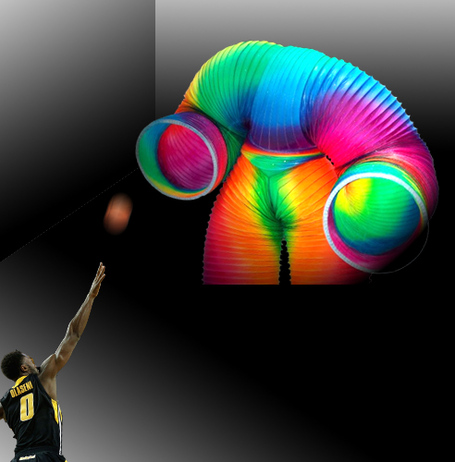 The ball sails through the gaping aperture at the end of the Human Slinky's arm and lands with an oddly squishy thud. The Human Slinky is devoured by the flyball dogs.

You... You've killed him! [weeps] Of all the slinkies I have encountered in my travels, he was the most... human.

Soooooo.... we have an opening for next week's halftime, I guess? I'll call the nearest local dance team. [flips eighth bowl on head, bows, unicycles out of room]

Do I get to make my changes to halftime, then?

Considering that this is all your own fever dream after eating some bad fish and chips and falling asleep while watching BBC America, sure, why not. 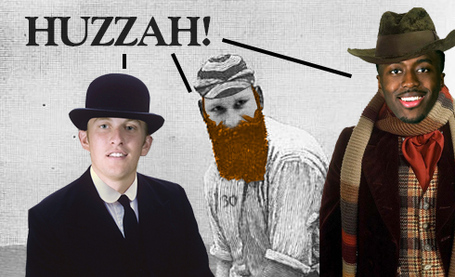