Know thy enemy, VH1 edition. From aspiring hip-hop star to forward at Purdue

From the small town of Crawfordsville, Indiana, comes a tale of an aspiring hip-hop star turned starting forward for the Purdue Boilermakers. DJ Byrd didn't always have hoops dreams. In fact, as a young man, he pursued his dream of becoming the world's next big hip-hop artist.

As a boy, Byrd spent many hours in the sleepy town of Crawfordsville flipping through the seemingly countless options of country music on his radio dial. Wanting something more, Byrd saved every penny earned from cutting grass in the summer to purchase a TP-Link Grid Parabolic antenna for his bedroom television. That's when Byrd discovered the Jukebox channel "The Box" and like a magical door, his world opened to the lyrical masterminds of the late 1980's and early 90's hip-hop era.

Inspired by the careers of Ice T, Ice Cube and Vanilla Ice, Byrd immediately began penning his own lyrics voicing over beats and loops on his Talkboy tape recorder. He would rap for all those that would listen and occasionally drew a small crowd when he laid down his lyrics outside of various town shops on Main Street. Byrd took his act all the way to the Indiana State Fair where he won fourth place (out of four) in the pre-teen talent competition. Bert Benson, of the Indianapolis Star, wrote of Byrd's performance, "Perhaps ahead of its time, DJ Byrd's rendition of Iced Iced Byrdie confused and befuddled the silver haired sleepy crowd at the Indiana State Fair talent show."

Byrd left the State Fair determined to find another path in life. It was another purchase by his mother in the home, nearly a year later, that again sparked the desire to become the world's next hip-hop star. A computer.

With a home computer and the World Wide Web Byrd was able to digitize his tracks and share them with an audience that did not exist in Crawfordsville. Byrd would learn to upload his tracks to Napster and perfected the art of using popular song titles to trick users into downloading his music. From Napster, a small fan base started to grow. Byrd is said to be the inspiration for popular 2000's rap group the Icy Hot Stuntaz. 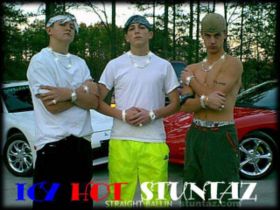 Byrd's fame peaked when he amassed 1,123 friends on his MySpace page. After countless hours of searching and befriending everyone he could his MySpace page dedicated to his music finally gave the world a chance to hear his talents. His hit single, Tip of the Ice Byrd, hit # 3,030,123 on the MySpace music charts with 17 downloads. 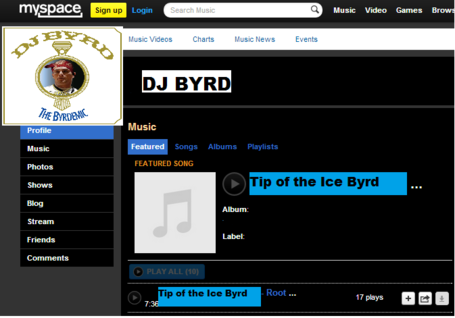 After failing to secure a major record deal, Byrd eventually tried to reinvent himself on the underground rave scene. Still using his name, DJ Byrd, he would spin tracks for the kids of Crawfordsville in various barns and warehouses taking them deep into a trance late into the night. Byrd's DJ gigs only came every so often so Byrd also spun records at Easy Eddies, a topless club on the outskirts of town.

Byrd credits those late nights at Eddies and their cable access in finding his current career dream. While working the booth on a slow Tuesday night, Byrd spotted a rather curious character slam dunking for the Denver Nuggets named Chris Andersen on the ESPN highlights. Andersen is also know as the "Bird Man" and another dream for DJ was born.

DJ Byrd left Crawfordsville that summer and enrolled at Purdue University. Despite never playing basketball he has managed to play all of his four years for Purdue. He played sparingly his first year on campus but this season is averaging 10.4 points a game in just over 29 minutes per game. It's his last chance at Purdue to show NBA scouts that maybe he could become the NBA's next Byrd Man.