ZUT ALORS! Kirk Ferentz To Take His Talents to Montreal

Share All sharing options for: ZUT ALORS! Kirk Ferentz To Take His Talents to Montreal

IOWA CITY, IA (AP) -- After years of declining the overtures of professional football organizations across America, Kirk Ferentz made a surprising about-face on Wednesday and announced that he had accepted the head coaching position of the Montreal Alouettes of the Canadian Football League (CFL). The position with the Alouettes became open after former head coach Marc Trestman accepted the head coaching position with the Chicago Bears of the National Football League (NFL).

"Well, you know, I've just been waiting for the right opportunity," said Ferentz in response to questions about why he would leave Iowa now. "It has nothing to do with the fact that I went 4-8 at Iowa last year. Absolutely not. But, professionally, I needed a new challenge and Canada just seemed like the right place for me. I was talking to Drew [Tate, quarterback of the Calgary Stampeders of the CFL] and Jovon [Johnson, defensive back for the Winnipeg Blue Bombers] and they were telling me about the game up there. It just sounded magical. 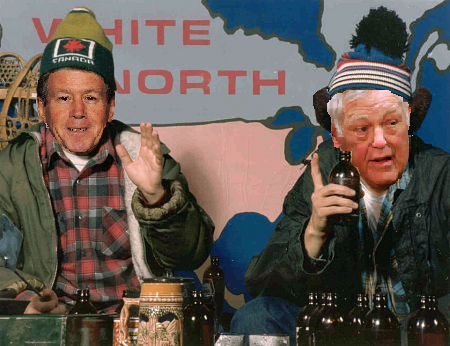 "Yeah, Ken and Norm will be joining me. It turns out retirement didn't really suit Norm all that well. He got bored, you know? Really, really bored. It was either get back into coaching or continue his quest to become the cockfighting king of Johnson County and, frankly, Sheriff Denning has been cracking down on the cockfighting action lately. Or so I've been told. And ol' Kenny is always up for a new adventure."

"Kirk told me the caribou were in danger, too, and what kind of guy would I be if I didn't try to save the caribou? A pretty gosh darn bad guy, that's what I'd be. Also, I really think the larger field will be perfect for our offensive schemes. I always felt the biggest impediment to our lack of success with the end-around at Iowa was the size of the field -- it was just too dang small! We kept hitting the sidelines! Well, now we have more room to work with, which is definitely going to allow us to take things to the next level," indicated O'Keefe.

"The larger field will be perfect for our defensive philosophy, too," noted Ferentz. "We've always preferred a bend-but-don't-break style and with a longer field we'll have even more room to bend. It's going to be impossible for teams to maintain the level of patience and accuracy necessary to beat our defense. I mean, unless any of the CFL teams up here have Northwestern quarterbacks. They don't, right?"

"I was also very excited when I heard about the additional ways you could score through the kicking game. I love kicking the ball to score points. Just love it. Can't get enough of it. I can barely express how excited I was when I saw Oregon score on a one-point safety in the Fiesta Bowl a few weeks ago. You've never seen a piece of gum get chewed so hard. I almost unpleated my khakis!" Ferentz chuckled.

"I haven't been so moved by something since Mary and I went to Rome and took a peek at that famous ceiling over there. The Sistine Chattel? Something like that. But it was that beautiful. That play has been my white whale for years now. Decades, even. Ever since I was a little squirt of a kid in western Pennsylvania, poring over obscure football rules. I never thought I'd see one again, to be honest. I broke down and wept.

"But there comes a time when a man has to admit that maybe that whale is always going to be over the horizon, that maybe it's always going to be just beyond his grasp. And then I realized that maybe there was more than one way to skin a whale, if you'll pardon my mangled metaphor. In Canada there are other ways to score a single point. There's the rouge. I can't wait to see it in action," said Ferentz, becoming increasingly animated.

"Also, you punt on third down up there. Third down!" Ferentz then tittered uncontrollably for a few minutes before regaining his composure.

When asked about his unusual attire, Ferentz explained that he was trying to show his appreciation for Montreal's cultural heritage. "Well, I heard they were very proud of their Frenchness, you know, so I wanted to make it clear to fans of the Alouettes that Kirk Ferentz is one of you. I'm not so different, even though I've been in Iowa for a decade and a half. I like a good baguette and a glass of red wine. I don't mind a jaunty beret or a carefully-coiffed mustache. Why, Norm was telling me about this delightful local dish called poutine. Gravy and cheese curds on french fries? My god, I thought it was something he'd invented himself, like those frosting steaks. But it's real -- and delicious!"

Ferentz noted that he wasn't the only Ferentz family member getting into the spirit of being Canadian, either. "Brian will be joining my staff, also, to coach the offensive line. As you can see, he's incredibly excited about moving to Canada." 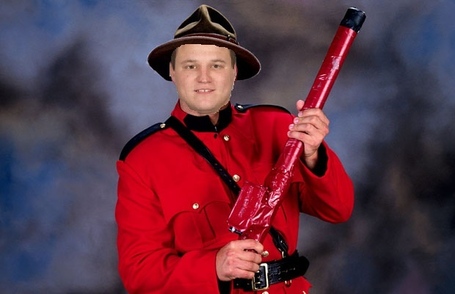 Finally, Ferentz explained that the decision to head to Montreal was also a personal decision. "At this stage of our lives, well, Mary and I are empty nesters, you know, and we were starting to feel like a couple of hawks caged in a cornfield! Or Canadian geese! [laughs] These Ferentz feathers needed to fly!"

Iowa athletic director Gary Barta declined to comment when asked if he felt Ferentz was having a nervous breakdown.