New Eagles coach Chip Kelly says goodbye to his former players and the collected media via his inimitable play-calling cards. 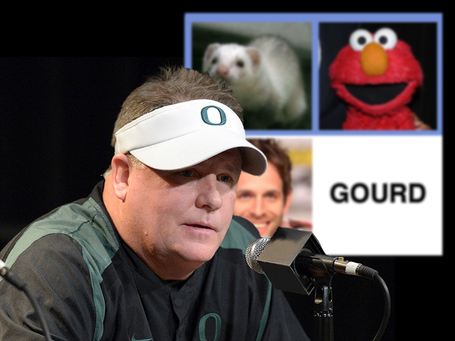 EUGENE, OR (AP) - Former Oregon head football coach Chip Kelly said goodbye to his old team in a heartfelt address earlier today, delivered solely via large, four-panel pictograms. Kelly, who recently accepted the position of head coach of the Philadelphia Eagles, walked to the podium with a thick stack of the colorful posters, then proceeded to soundlessly file through them for the audience of collected Oregon football players, administrators and media. For thirty minutes, the only sound in the auditorium was the dull thud of card stock hitting the floor, as well as the occasional muffled sob from an emotionally overcome player.

"It was the best speech I've ever heard," Oregon sophomore linebacker Derrick Malone said. "After hearing that -- or seeing that or whatever -- I completely understand why Coach Kelly felt he had to leave. At first I was upset with him for abandoning us, but now all I can say is that I am profoundly moved by his eloquence, and that I wish him the best of luck."

Others present concurred with Malone's assessment. "I think my favorite part of the speech was when he held up the Donkey-Car-Bruce Lee-'marzipan' card," said junior quarterback Dustin Haines. "I don't think I've ever observed someone more beautifully describe the desire to test oneself at the highest possible level of competition. I don't usually cry, but I have to confess I teared up when I saw that."

A few, however, were not entirely pleased. "I can't believe he just held up Cheese Wheel-Musberger-Koala-'rectangle'!" said Oregon freshman defensive lineman DeForest Buckner. "Are you kidding me? Cheese Wheel-Musberger-Koala-'rectangle'?!? Like that makes it okay? No way, man! No way!" Buckner then proceeded to scribble what looked like a hummingbird, a pumpkin, Angelina Jolie and the word "gargoyle" on a napkin and threw it at Kelly before storming out of the room.

Kelly has taken to communicating solely through the use of the large format, four-image cards in the past few months. Although he initially used the cards solely for play-calling on the Oregon sideline, Kelly is reported to have expanded the pictographs to the point that they now constitute a fully functioning language of their own.

This new language, called by some quackaphore, has attracted the attention of academics across the country. University of Texas linguistics professor Mary Cable has set herself the task of decoding the new visual language, but has yet to come to any decisive conclusions. "This last press conference was a goldmine of new data for us," said Cable. "We think we might have a good handle on what the animal portion of the signs means. As far as we can tell, that portion refers to the emotional state of the speaker, like here, 'manatee', we think that indicates a state of jealousy. The word portion of the card is some kind of grammatical marker, perhaps of the tense or mood of the sentence. Beyond that, we're still stumped."

Cable also mentioned that she and her colleagues have a guess at the meaning of at least one of the cards. "Right at the end of his press conference, Kelly held up a poster and pointed it directly at the media collected in the audience. Using context clues, we have determined that this final poster meant either 'You want to buy lots of clothing for a funeral, sad typewriter", or 'Eat shirts and die, ink-stained wretches'. We're still sorting it out."