The Hawkeyes show themselves rounding into the team in full. 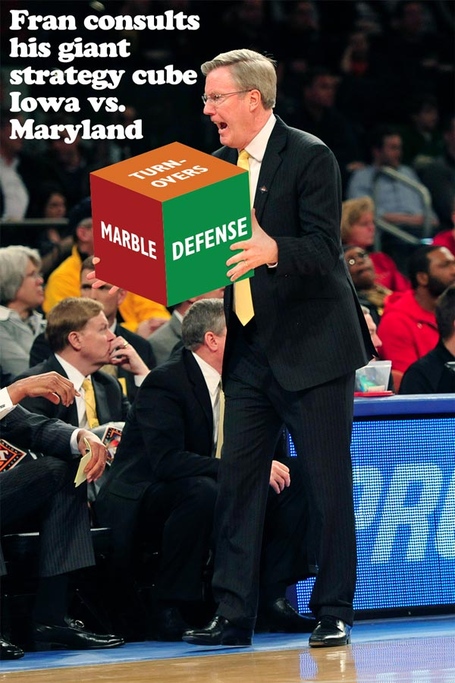 Iowa had a giant obstacle to overcome in beating Maryland: a giant, 255-pound, 7'1" obstacle named Alex Len. Len is enormous, obviously, but also surprisingly mobile for a big man, and manages to affect a wide sphere of space on the court on defense. To score against the imposing big man, Iowa did three things: 1) made mid-range jump shots, 2) forced turnovers and scored in transition, and 3) got to the foul line.

The story coming out of the game has mainly been about the turnovers (which were crucial, and more about that later), but the biggest development, in my mind, was the improvement in Iowa's ability to make long jump shots. All year, the Hawks have struggled to make shots from the perimeter (as evidenced by their 297th ranked three-point percentage), and while they didn't light it up from three last night (only 4-12), they got numerous crucial mid-range twos that kept Maryland at bay throughout the game. Devyn Marble, Mike Gesell, Zach McCabe, Anthony Clemmons and even Gabe Olaseni all, at various times, sank important 15-footers. Iowa's shooting was still mediocre overall (45.6% eFG%, largely due to the imposing presence of Len), but the presence of a midrange game allowed Iowa to keep producing points even when the middle was closed down by a certain mammoth Ukranian. For whatever reason, Iowa seems to have gained tremendous confidence in taking these shots without hesitation, and they're making them.

About the turnovers, though, and the defense in general: it was, again, excellent. Maryland was exceptionally sloppy with the ball, committing numerous unforced turnovers and generally playing loose with the ball, but Iowa stayed alert and picked up what the Terrapins were laying down, scoring 27 (!) points off turnovers. Eric May was the biggest cause/beneficiary of the turnovers, snagging three steals (one of which he turned into a thunderous dunk) and playing great defense on Maryland's perimeter players all night. May had one of the better games of his career (maybe the best, considering the circumstances), contributing not only defense but a well-rounded offensive game, dishing out five assists and even throwing in a couple of step-back jumpers (including a step-back three!). He also grabbed four rebounds and, importantly, drew four of Dez Wells' five fouls. Wells was really sloppy with his fouls, giving four of them after Iowa grabbed defensive rebounds, but May put himself in position to draw those fouls by boxing out well and securing the rebound.

Beyond the turnovers, though, Iowa just played its standard good defense. Len got his points (16 on 6-10 shooting), but Adam Woodbury did a good enough job with him one-on-one in his season-high 29 minutes that Iowa could afford not to help too much. Thanks to that, the non-Len Maryland players shot a meager 36% from the floor and had an eFG% of just 41.5%. Woodbury's endurance is apparently improving, and it couldn't have come at a better time. He was in the game almost minute for minute with Len, and Iowa needed him desperately. Neither Olaseni nor Basabe could really wrangle with Len, but Woodbury is one of the few college players that can go toe to toe with him and not get burnt too badly. Woodbury did some good work on offense, too (3-8 from the field and 3-4 from the line for 9 points), but without his defense, I don't know if Iowa could have won. It was, without a doubt, his best game of the year.

And we've gotten this far without really mentioning Dev Marble's performance, which is a crime. He had a super efficient 21 points on 16 shots, grabbed 9 rebounds to go along with three assists, a block and a steal, and generally looked like a player with no fear and infinite swag. Marble gave us glimpses of this at the end of last year (the Oregon game in particular), but he has taken his game to another level in this tournament. He's shooting from all areas of the court with no fear, and making some very tough jump shots. With his size and quickness, he's a tough cover for most defenders, and when his jump shot is, for the most part, unguardable.

The other player who deserves special mention is Aaron White. Although Len's presence made it difficult for him to score in the post, he still did what he does best: drew fouls. I don't know if people realize this, but Aaron White is one of the best foul-drawers in the country. His fouls-drawn/40 minutes rank is 25th in the country right now according to KenPom, not far behind offensive luminaries like Erick Green, Russ Smith, Davante Gardner and Cody Zeller. As a rough measure of "hard-to-guard-ness", White's fouls-drawn numbers suggest that he is a very slippery guy to cover (or at least really, really easy to foul). He got to the line 10 times last night, which is pretty astonishing for a 40-minute college game, and drew at least 5 fouls. He also had two blocks and his typically good rebounding (two offensive, ten total), so in other words, just another night for the best foul-drawing, offensive-rebound grabbing, dunking ginger garbageman in the college game.

Some credit also goes out to the coaches, who mixed up defenses on Maryland and quickly discovered that the Terrapins had a bit of a problem computing how to beat a zone. It was uncanny how similar Maryland looked to Minnesota when confronted with Iowa's zone. They mostly passed it around the perimeter tentatively and then launched up a doomed jumper at the last second. Iowa played their usual mix of man and zone, but stuck to zone for most of crunch time, and it paid off: Maryland was held to fewer than a point per possession for the game. The coaches also did a good job on offense, devising some nice sets to spring Gesell and Marble for open jumpers off of screens and generally figuring out a way to play around Len. Maryland is a good defensive team (39th in the country according to KenPom, at .922 points/possession given up), but Iowa scored a very healthy 1.14 points per possesion against them.

All in all, it was one of Iowa's more impressive efforts on the year. I hesitate to say it was their best, both because Maryland's non-Len players played remarkably sloppy games and because I still think Iowa's first 30 minutes against Michigan State was their best stretch of the year, considering the strength of opponent. Nevertheless, the Hawks are peaking at just the right time, and demonstrating again and again that they are good enough to play with just about anyone (except Louisville, who are terrifying). Either Bill Raftery or Dan Dakich said last night that the best thing about Iowa is that they play like a team, and that felt like a very high compliment. On offense and defense, they are playing very coordinated basketball and really maximizing their strengths right now. On to Baylor!

p.s. For anyone who is interested in following me on Twitter, I'll be transitioning over to a new account at hecBHGP, which I'll use for most of my sports-related thoughts.