Iowa 71, Maryland 60: Eric May is Awesome, and Other Things I Liked About That Game

Was that fun? Oh, was it ever fun.

Share All sharing options for: Iowa 71, Maryland 60: Eric May is Awesome, and Other Things I Liked About That Game

Iowa just can't stop winning. They won their fourth NIT game in a row Tuesday night, a 71-60 victory over Maryland in the NIT semifinals at Madison Square Garden that lifted them into the NIT Championship Game on Thursday night. They'll play Baylor at 8 pm CT on ESPN on Thursday. But more on that game in a bit -- for now, let's spend a little bit more time basking in the win over the Terps.

1) ERIC MAY IS AWESOME

Yet again, Marble carried the game for Iowa -- he was the leading scorer (and rebounder), he initiated the offense well, he keyed Iowa's early charge and made timely baskets late to preserve Iowa's lead -- but we'll talk about him in a minute. Let's talk about Eric May instead, because Eric May had a pretty damn great game, too. The numbers don't lie: 12 points, 4 rebounds, a team-best 5 assists, 3 steals, and only 1 foul in a team-high 36 minutes of playing time. And after two near-misses in the first half, he had a rim-rattling MAYGASM-inducing dunk off a steal early in the second half.

But he saved his best for last. With just over two minutes remaining and Iowa clinging to a 64-58 lead, May put the Hawkeyes on his back and helped carry them across the finish line. He snared a key defensive rebound when the Terps had a chance to make it a one-possession game. He got fouled on the play and made both free throws to boost Iowa's lead to 8 points. A minute later, after Maryland had again cut the lead to 6, May again got a defensive rebound for Iowa. 30 seconds after that, he drilled an ice-cold ONIONS DAGGER three-pointer from the top of the key, giving Iowa a 9-point lead with a minute to go. Game, blouses.

Every year since Fran has been here, Iowa's had a senior who played the best ball of his Iowa career late in the season, doing his damndest to carry Iowa to a few more wins. Two years ago, it was Jarryd Cole, the heart and soul of that Iowa team and the guy who had quietly endured the worst stretch of Iowa basketball in history with dignity and grace, balling out in Iowa's upset over a top-5 ranked Purdue team. Last year, it was Matt Gatens going supernova in the second half of the Big Ten season, using some inspired sharpshooting to carry Iowa over the .500 hump and into Iowa's first post-season wins in several years.

This year, it's Eric May. He became a fan favorite early on at Iowa for his breathtaking dunks, but as the years went by and he became more inconsistent, enthusiasm for his play waned among Iowa fans. He seemed more athlete than basketball player. To be fair, injuries played a role in his diminished presence as well -- the Eric May of this year (and of his freshman season) just plain looks healthier than the Eric May of the last few years. He's faster and stronger and he has a better spring in his step. He's also smarter. He's found -- and embraced -- a role that suits him: a tenacious defender, a shooter who picks his spots, and a quietly solid all-around game that. Oh, and he's still a great dunker, too. Late in the season he's been asked to do even more with Mike Gesell's foot injury limiting his minutes, but he's not only stepped up -- he's flourished in a bigger role. Eric May is playing like a guy who doesn't want his Hawkeye career to end and it's a beautiful sight to see. Unfortunately, it is going to end and we even know when it's going to end: Thursday night, in the NIT Championship Game in MSG. Let's hope he can end it hoisting an NIT Championship Trophy.

Oh hey, just another 21-point, 9-rebound, 3-assist game for RDM. No biggie. Ho hum. Marble certainly loves him some NIT. He's averaging 24.3 ppg, 4.8 rpg, 4.8 apg, and 2.5 spg in the NIT -- oh, and he's only been whistled for TWO FOULS through all four games. He's putting together the best sustained run for an Iowa player since... shit, I have no idea. This is amazing stuff and perhaps the most incredible part is how easy he's made it look most of the time -- nailing jumpers off curls, hitting step-back threes, gliding to the hoop with ease. It's fun stuff and if this is the Marble shows up regularly next year... /whistles

For the second-straight game, Iowa was able to withstand a second-half charge and finish a game strong. That was a recurring problem for Iowa during Big Ten play, so it's gratifying to see that the lumps they endured then are paying off now. Teams -- especially young teams -- have to learn how to win and hopefully that's what this team is doing now. Given that everyone but Eric May should return next season, that experience could prove invaluable. In this game, Maryland cut the lead to 4 near the midway point of the second half -- Iowa responded with a 7-0 run to build the lead back up to 11 points. Maryland hacked the lead down to 5-6 points on several occasions after that, but they were never able to get closer than that -- every time they put together a mini-run, Iowa was seemingly able to answer, either with a bucket of their own, some made free throws, or a defensive stop or two to prevent the Terps from getting any closer. The final scores of Iowa's NIT games would suggest that the games weren't close, but that's not entirely accurate -- there have been nervous moments in the second half of every game in this NIT run, moments when this Iowa team could have crumbled like they did in the regular season. But they haven't done that, which is why they have four straight double-digit wins on their record -- and why they'll be playing for an NIT title on Thursday.

I have to admit, I'm now looking forward to Maryland joining the Big Ten. The Testudo Times community was a lot of fun to interact with in the lead-up to this game, the pep band played the Teenage Mutant Ninja Turtles theme song coming out of a commercial break, and they have Testudo, who will instantly become one of the five-best mascots in the Big Ten as soon as Maryland joins up. 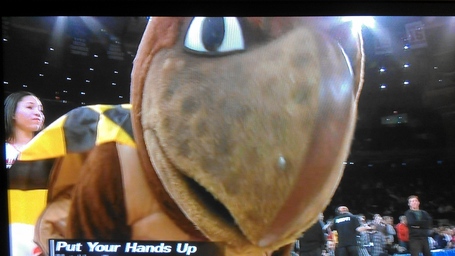 So welcome aboard, Terp bros -- looking forward to having you around in two years. And I'm glad that Alex Len fella will be cashing paychecks in the NBA by then -- he was damn good. He had 16 points, 9 rebounds, and 6 blocks on just 10 field goal attempts. He probably should have had at least twice as many touches. When he got going in the second half, Iowa struggled to counter him (although I did think that Woodbury did an admirable job of defending him at times during the game). He certainly should have had a lot more touches than Nick Faust (14 points on 5/14 shooting), but then again, I guess Len didn't make a deal with the devil...

6) ANATOMY OF A POSTERIZATION

Mel-sizzle had a pretty quiet game in his return home -- just 4 points (on 2/7 shooting), 3 rebounds, 1 assist, and 1 steal in 15 minutes of work. Early on, Basabe looked good -- very energetic and aggressive on both sides of the ball. Once Maryland's defense settled in a bit his influence waned, though, and after picking up two quick fouls early in the second half, he found himself planted to the bench for the rest of the game. That was unfortunate and hopefully he's able to put on more of a show for his friends and family on Thursday night, but he did give us one tremendous highlight: this poster-worthy slam right on future NBA Draft Lottery pick Alex Len's mug. 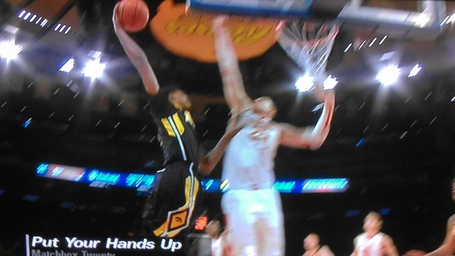 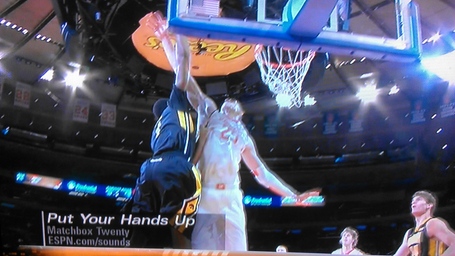 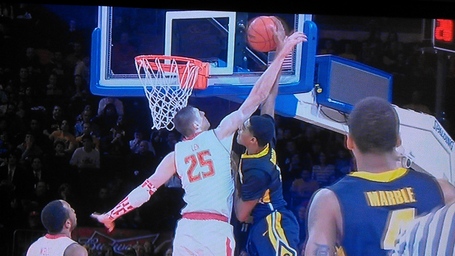 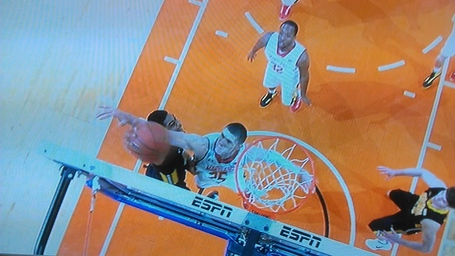 Check out the video version, too, because the pictures move there:

Or you can get in GIF version here.

So this guy was at the Iowa game last night. He was goofy. And pretty great.

We can neither confirm nor deny that this was famed BHGP contributor StoopsMyAss. (But in all seriousness: if that dude is you or your know that dude -- kudos to you for rocking out. Feel free to pipe up in the comments to bask in your moment of glory.)

Now that's good... but I think it could be better.