Digging into Iowa's win over Virginia a little bit more.

Iowa's win over Virginia last night was superb. Here's a few things I liked about it. (And never fear -- the esteemed Mr. Cow has a typically excellent Fran-Graph on the way for this game, too.)

I don't even want to think about how many games Iowa lost this year at least in part because of poor free throw shooting late in the game. But there was no shortage of losses like that in January and February. So it was incredibly gratifying to see Iowa drill free throw after free throw to seal this win and deny any possibility of a Virginia comeback. Iowa's final made field goal in the game was a 3-pointer from Eric May with 4:09 remaining. That pushed Iowa's lead to 12. Virginia cut that down to 9 after Justin Anderson made three free throws with 3:34 to go. Poor free throw shooting from Iowa could have cracked open the door for Virginia to storm back and make a comeback -- but Iowa didn't let that happen. Anthony Clemmons drilled four three throws, Roy Devyn Marble made six in a row, and Aaron White capped the night with four made three throws. In all, Iowa went 14/14 from the charity stripe at the end of the game, which was a big factor in Iowa having such a comfortable, relatively stress-free experience in the final minutes.

Iowa has been a poor 3-point shooting team all season (30.9%, 297th in the nation, per KenPom), so we certainly didn't see a night like this coming: 8/17 from long range. And it would have been even better if Marble (1/5) and Aaron White (0/3) hadn't keep jacking up treys. Iowa was fantastic from deep in this game, which was both a welcome change from our usual clang-heavy efforts and a necessary development, given Iowa's inability to score in the paint in this game.

Ho-hum. Just another game with 20+ points for RDM. He shot 50% from the field (8/16), despite struggling from behind the arc (1/5). He made a host of difficult turnaround jumpers and for stretches of the game was basically Iowa's only reliable offensive threat. In my recap of Iowa's win over Indiana State, I noted that Iowa would go as far in the NIT as Marble could carry them. Luckily for Iowa (and us), Marble's chosen a great time to play some of the best basketball of his career. Marble has been exceptional in the NIT for Iowa -- hopefully he's got two more games like this in him.

Statistically speaking, the only game Woody played this year that was better than his outing against the Cavaliers was Iowa's win over Gardner-Webb back in November. Woodbury scored 12 points and pulled down 8 rebounds in that game; he scored 10 points and snared 8 rebounds in a career-high 26 minutes in this game. Considering that Virginia is just a little bit better than Gardner-Webb, I think we can probably call this the best game of Woody's young career. He finished well around the hoop, attacked the glass with impressive ferocity, and even dished our a pair of assists. Iowa didn't get much production out of Melsahn Basabe (0 pts on 0/3 shooting) and Aaron White (6 points on 1/6 shooting), but Woodbury's strong showing certainly helped mitigate their poor games.

Last night's game felt like Anthony Clemmons' entire season in a nutshell. There was good Clemmons (nailing a 3, making four huge free throws late, making an impressive block on a fast beak) and there was bad Clemmons (he had turnovers on three straight plays, although the ESPN play-by-play seems to be crediting Olaseni for one of those turnovers) and sometimes the good and the bad happened in rapid-fire succession. That impressive block came after a turnover he had given away and was followed by... another Clemmons turnover. Seconds later, he fed RDM for a wide-open 3 on a fast break. This was Clemmons at his best... and at his worst. But as bad as some of his mistakes were, his good plays more than made up for them and gave us all an excellent reminder of why Fran hasn't given up on his young point guard this year. Tonight was also a great reminder of just why we were so excited about Clemmons earlier in the season, too.

Mel didn't do much to stuff the stat sheet tonight (0 points, 2 rebounds, 1 assist*, and 1 block), but his celebration game was off the charts: 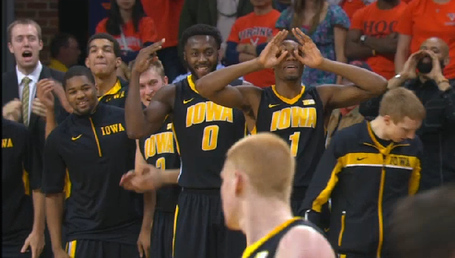 * Yes, Basabe had more assists than points in a game. Hell may have finally frozen over.

7) Winning big without everything working

You want to know what one of the most exciting things about this win? Iowa beat a good team on the road by double-digits... and there were a lot of things that didn't go their way in this game. I thought Aaron White and Melsahn Basabe needed to have big games for Iowa to win this game -- they combined for 6 points and 7 rebounds. I thought Iowa needed to dominate the glass and limit offensive rebounds -- Iowa did outrebound the Cavaliers (29-23), but the Cavs had the advantage on the offensive glass (10-7). I thought Iowa needed to take care of the ball and avoid turnovers -- Iowa had just one fewer turnover (15) than Virginia (16). I thought Iowa probably needed to have some friendly (or at least neutral) officiating -- instead the officiating was haphazard and frustrating. Virginia finished with 15 fouls to Iowa's 17 fouls, but several of those UVA fouls came late in the game, when they were just trying to extend the game.

That Iowas was able to win -- and win so comfortably -- even without several things going their way is a testament to the depth of this team. In years past, if Iowa's second- and third-best players had had games as ineffectual as White and Basabe had in this game, there's almost no way Iowa would have won, especially against a quality opponent like Virginia. But this Iowa team has so many more weapons and so many more players who can (and have) stepped up. White and Basabe struggling? No problem -- Woodbury and McCabe will go for 20 points, 11 rebounds, and 4 assists tonight. It's awfully satisfying to see that Iowa can win games, even when a few guys struggle.