Yes, Virginia, there is a Franta Claus, and he is a dark and vengeful Fran-ta Claus. 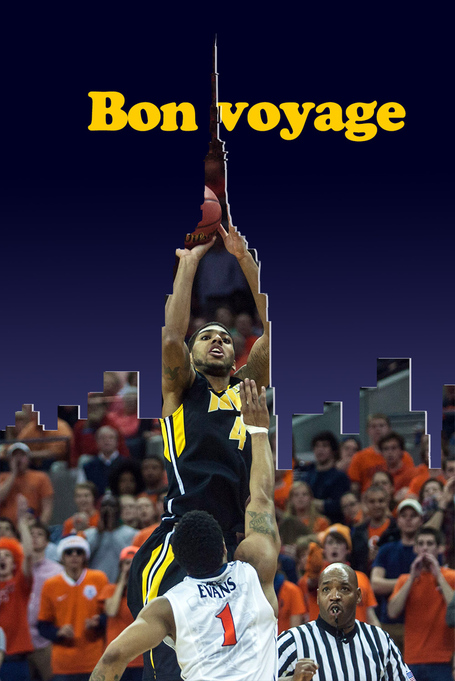 Iowa has leaned so hard on its defense this year that it's been hard to remember that, yes, they can play good offense as well. With an eFG% of 56.6% to go along with 15-15 on free throws and 1.16 points per possession, the Hawks finally put it all together on the other end of the court, and the result was a slow and steady smothering of a very good Virginia team on their home court.

One of the pleasures of the post-season is watching the team get a chance to play outside the strictures of the Big Ten, where the defense is physical and where teams know each other's personnel with such precision that you rarely see a good shooter come totally free on the perimeter. Against Virginia, there was just an ever so slight looseness to the defense that allowed Iowa's shooters the freedom to take good, clear shots. Shooters that are normally not left open on the perimeter, such as Josh Oglesby and Mike Gesell, had the extra half second to catch and shoot, and it made a tremendous difference. The last (serious) game that had this same loose quality came against Northern Iowa, where Devyn Marble went off for 30 points and four threes and Gesell had 23 and four threes of his own. Virginia has been a very good defensive team all year, so I don't know where this laxness came from, but it demonstrated something that I think has been lost with the Hawks this year: they are capable shooters, but they have been shooting in very narrow windows. The narrowness of the windows is due to the lack of a player to break down the defense or draw double teams, but now that Devyn Marble has returned to his level of play from the end of last year, the ice is starting to thaw on offense for the Hawks.

You also probably have to chalk some of it up to simple luck; Adam Woodbury made five shots, many of which were of the fairly difficult half-hook variety that he has missed so often this year. Marble made 8-16, including a couple tough turnarounds, and Zach McCabe had a very efficient 10 points on six shots. Virginia packed their defense in against Iowa, and left it up to the Hawks to make jump shots. Iowa did, and that was pretty much the game. Mike Tobey and Justin Anderson (two very good looking freshman for the Cavaliers) held Iowa in check inside, blocking eight shots between them, but as long as the shots were falling from outside, it didn't matter. Iowa could afford to have the duo of Aaron White and Melsahn Basabe combine for six points and still win comfortably.

On defense, Iowa shook off some early three-point makes and played with their usual sound positioning. Eric May and Adam Woodbury deserve special credit for the way they shut down Joe Harris and whoever was trying to score inside for Virginia, respectively. Harris got a lot of attention from various players, but May had the size and strength to match him, and did a fine job of shadowing him all game. It will be sad to see May leave the Hawks, because he really does add some unique abilities on defense, and there's no one on next year's team who has that kind of size, speed and strength to guard elite wings. In the post, Woodbury did a fantastic job of both showing out on perimeter shooters and then recovering to the post. His ability to body up offensive players down low is well known, but an under-appreciated part of his game is his patience as a defender. He doesn't go for fakes and maintains his position well, forcing shooters to take awkward shots around his body.

Other than that, the win just sort of ... happened. I'm as thrilled as anyone that the Hawks did the improbable and beat Virginia on their home turf, but did anyone else get the sense that the Cavaliers were playing sort of half-heartedly? I haven't watched them that much, so I have no reference to compare to, but they seemed just a little off. Tobey and Anderson played with enthusiasm, but everyone else seemed muted somehow. I guess another way to put it is that Iowa is a good team playing with a lot of motivation, and anyone who wants to beat them has to bring not only talent and home court, but enthusiasm.

So now it's on to New York and our new most hated Big Ten rival, Maryland. The Hawks will get a nice long rest between now and next Tuesday, which should be particularly beneficial to Mike Gesell. They're the best team left in the tournament by Ken Pom's rating (#20 now, with Baylor next best at #34), and seem to be playing their best basketball at the perfect time.