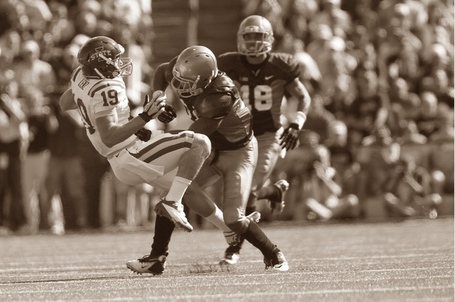 A long sensational 40 yard pass that gave Iowa State the ball on Iowa's 9 yard line led to a 22 yard Edwin Arceo field goal four plays later, providing the Cyclones with the points that would prove the winning margin in this sporting contest for the cherished Cy-Hawk Trophy. The field goal came at the beginning of the second quarter and though the Iowa offense had several opportunities to take the lead on subsequent possessions, the sluggish offense could only muster an additional three points of their own in the terminal half of this gritty encounter.

Scored on in the opening stanza with a touchdown by Iowa State quarter-back Steele Jantz to flanker Aaron Horne and again with the field goal from Arceo, the Hawk-eye defenders summoned impressive fortitude to hold the hard-charging Cyclone offense without any further points for the duration of the encounter. The end-zone embargo engineered by the crafty Hawk-eye defensemen did not come easily. Three times the Cyclone attackers threatened the Hawk-eye goal line. Three times the Cyclone attackers came away with zero points, while each time the pig-skin ended in the possession of a Hawk-eye player.

The fourth and final Cyclone turn-over, an interception in the end-zone by Hawk-eye line-backer James Morris breathed fresh life into the flailing hopes of the Iowa foot-ballers with barely three minutes remaining in the final quarter of play. Morris, now displaying a mustache reminiscent of silver screen star Douglas Fairbanks, returned the foot-ball nearly one-half the length of the grid-iron, to the Iowa 49 yard line. Alas, the Hawk-eye offense was unable to advance the ball further, as four consecutive forward passes fell harmlessly to the Kinnick Field turf. The final throw, from Hawk-eye quarter-back and celebrated ursine assassin James Vandenberg to pass-catcher Don Shumpert, hit the latter squarely between the numerals on his chest before then rebounding off his yearning finger-tips. It was one of 8 dropped forward passes on the afternoon for the Iowa pass-catchers.

Yet even that was not the end of Iowa's opportunities to snatch sweet victory from the jaws of bitter defeat at the hands of their in-state rival. The Hawk-eye defense again forced a Cyclone punt, one of six on the day for Iowa State's superlative punting specialist Kirby Van Der Kamp, and regained possession of the foot-ball on their own 10 yard line with two minutes remaining on the clock. A 7 yard scamper from Vandenberg was followed by two incomplete forward passes. With the game teetering on the precipice of failure, Vandenberg completed a 29 yard pass on 4th down to wide-man Keenan Davis as the 70,000 black and gold faithful in attendance thundered their approval. Vandenberg followed that thrilling play up with a pair of forward passes to Hawk-eye tail-back Damon Bullock, who slid into the out-of-bounds territory at the Cyclone 32 yard line. The spirited come-back effort expired on the next play, as Vandenberg's attempted forward pass to tight-end C.J. Fiedorowicz was tipped into the air and Cyclone line-backer Jake Knott came down with the oval. Jantz kneed the pigskin safely on two following plays, securing the second-straight victory over the Hawk-eyes for the Cyclones and their combustible head coach, Paul Rhoads.

The Cyclone offense, showing great disdain for conventional footballing concepts such as the huddle, the traditional snap, and the blocking full-back, began the game by descending upon the Iowa defense with the ferocity and wild unpredictability of their namesake and moved down the field with considerable alacrity. They concluded their drive with the touch-down catch by Horne, the lone touch-down of the game to be scored by either squad. The Cyclones advanced the ball inside the Iowa 5 yard line on their next two possessions, only to fumble the pig-skin away to Hawk-eye defender Dominic "Tiny" Alvis on one and settle for Arceo's game-winning field goal on the other. The tempest-like Cyclone offense was tamed by the Hawk-eye defense in the second half, with Iowa defensive co-ordinator Phil Parker's half-time adjustments resulting in three Cyclone turn-overs, five Van Der Kamp punts, and zero additional points.

The Hawk-eye offense continued to struggle to advance the foot-ball and, more critically, put points on the score-board for the second week running. After advancing the foot-ball to the Iowa State 11 on their first drive, the Hawk-eye offense stalled and was forced to take a 23 yard field goal from Hawk-eye place-kicker Mike Meyer. The Hawk-eyes again found themselves with an opportunity to score a touch-down late in the third quarter of play after the Iowa defense had forced and recovered a second Cyclone fumble. Indeed, at first it seemed as if the Hawk-eyes had scored a touch-down when wide-man Keenan Davis caught a forward pass from James Vandenberg and skittered down the sideline and into the end zone. The refereeing crew went to the side-line picture-show to review the play and determined that Davis had stepped out-of-bounds on the Iowa State 3 yard line.

Iowa had a first down, but was unable to breach the Cyclone goal line. Hawk-eye tail-back Damon Bullock was unable to power into the end-zone on consecutive plunges up the middle and a forward pass on third down fell incomplete. The Hawk-eyes settled for a field goal, their second of the game and the final points scored in the contest. Bullock, the hero one week earlier, struggled to duplicate his production against the Cyclone defense, rushing for just 53 yards on 22 carries, though he was able to contribute 56 yards on pass receptions.