Share All sharing options for: The Big Ten Betting Extravaganza: Week 2 - The picks hit the fan

I'm gonna chalk it up to being rusty. Haven't swung the old wrenches in awhile. Not to worry, I'll get my stroke back. Before we see what's on tap for this week, let's take a quick look at what went wrong.

First of all, I put a disclaimer on the MSU and Michigan games. Those were strictly me hoping for an outcome, not necessarily believing that it would actually happen. Penn State, on the other hand, is where my money went. And yeah, I get it, they've had attrition after an off-season of torrential shitpour, but I thought for sure they'd come out and do the opposite of suck on an ass the way they did. Anyway, they're fucked like a stray dog in Chinatown. 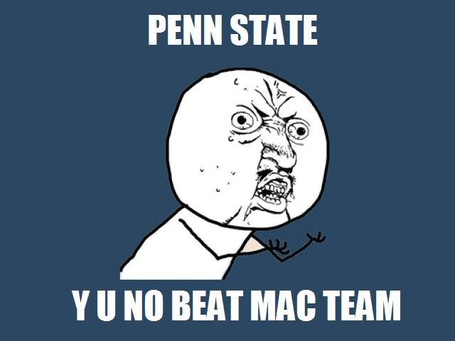 Clearly last week was just a warmup. Foreplay, if you will. Not that I know what foreplay is. Anyway, let's get down to business. 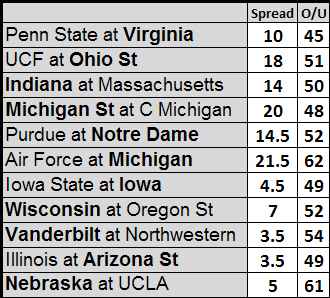 Indiana is favored by 14 points. In an away game. Playing football. WHAT. THE. FUCK.

Nebraska giving 5 to UCLA. The Bruins won 6 games last year. Yeah they played in the Pac-10 championship, but only because USC bought Reggie Bush a Ferrari and a diamond hat. Meanwhile, in their 7 losses they got outscored 122-310. They fired their dickweasel of a coach and replaced him with a guy named Mora, but not the "PLAYOFFS???" one. So we've established that UCLA is mediocre as fuck, but what about Nebraska? I'll be honest, it's tough for me to decide since I hate them like their last name is Fitzgerald. They've still got "AIDS on two feet" Martinez, so as long as they don't have to pass they should be fine.

Wisconsin laying 7 at Oregon State. That UNI game is weighing pretty heavily on this spread. The Beavers have knocked off a few highly-ranked teams in Corvallis in the past few years, but it's usually USC. I think the Badgers roll the fuck out of them, but something about this spread is disconcerning. Feels like stealing and I don't steal unless it's intellectual property.

Don't forget about the Over/Unders:

Vanderbilt and jNorthwestern seen like they can handle hitting over 54 points. Michigan State and Central Michigan don't seem like they're gonna figure out a way to score 48 total points. And Nebraska and UCLA seems like there's no fucking way they hit 61. Did I get that right? 61 points? Are you shitting me? Don't shit me.

I'll take Michigan State to cover the 20. It's a lot of points, but I'm confident that once Dantonio gets a 21-point lead, he'll have has defense take turns faking spina bifida until the clock runs out.

Who ya got? Use the comments. If you're persuasive enough, I'll take your word for it and bet my hard-earned money on the suggestion of an internet stranger because internet strangers are my favorite kind of people.