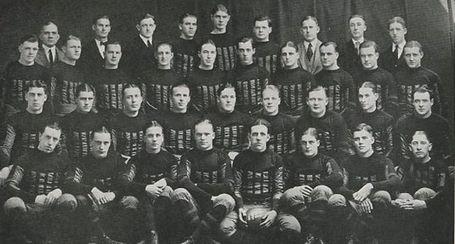 Tomorrow, Iowa will host Iowa State and wear special uniforms honoring the 1921-22 Hawkeye football teams. We've wanted to take a look at some of the stars of those teams and the seasons that were so special. If you missed any of the series, here are the previous posts:

Gone was Lester Belding, Duke Slater and both Devine brothers. The 1921 Hawkeye team went a surprising 7-0 and following the graduation of four all-Americans, many believed it couldn't be duplicated. Many were wrong.

The 1922 season opened on October 7th with a rematch from the season prior with Knox. The Hawkeyes had little trouble rolling Knox College to the tune of 61-0. Iowa outgained Knox 471 yards to two in the opening game.

Iowa's next game, like 1921's defeat of Notre Dame, was historic. Iowa traveled East to take on Yale. There was much made of this game in the media prior to the match-up. Yale was a powerhouse on the East Coast and Iowa was the reigning Big Ten Champion. Hawkeye coach Howard Jones returned to face the school for which he played and coached and matched wits against his brother, Yale coach Tad Jones. Iowa's primary rusher, Gordon Locke, was the focus of the Yale defense. It was Aubrey Devine's replacement at quarterback, Leland Parkin, that rushed for the games only touchdown. Iowa made national headlines as they defeated Yale 6-0.

Iowa traveled to Champaign to take on the Illini. Illinois had lost their season opener against Butler. It was a game that would make Todd Lickliter proud; Butler won 10-7. Illinois designated the game with Iowa as their homecoming. The Hawkeyes, perhaps, feeling a bit hungover from the Yale game in which only 12 players played, had a difficult time with Illinois. Gordon Locke scored Iowa's only touchdown and the Hawkeyes blocked a punt for a safety to secure an 8-7 victory.

Purdue traveled to Iowa City the next week, the Boilermakers were again a terrible team. They won their opener against Milikin but lost the next two to Notre Dame and Chicago by a combined score of 32-0. Iowa demolished the Boilers 56-0. Iowa out-gained Purdue 369 yards to 15. Gordon Locke would move from his halfback position to quarterback but it was Iowa's defense that paved the way. Iowa intercepted Purdue three times on the day. Max Kadesky returned one of those INTs for an 80 yard touchdown.

Iowa's next game was homecoming in Iowa City. Minnesota made the trip down to try to revenge 1921's epic loss. Gordon Locke was too much for the Gophers as he scored three touchdowns in the first half and Iowa had a comfortable 28-7 lead. Iowa would hold on in the second half to beat the Gophers for the fifth time in-a-row, 28-14.

Iowa traveled to Columbus for the first ever game between Iowa and Ohio State. The Hawkeyes were 5-0 and riding a 15 game winning streak. The Buckeyes entered the game at 2-3 having lost the last three in-a-row to Michigan, Minnesota and Chicago. The Buckeyes scored first and were the first team to do so against the Hawkeyes since 1920. Gordon Locke finished with 126 yards rushing and scored both of Iowa's two touchdowns. The Hawkeyes were able to hold the lead and won the game 12-9.

The final game of the season was in Iowa City. The Hawkeyes hosted jNorthwestern which arrived showing signs of life. jNorthwestern was 3-2-1 with victories over Beloit, Purdue and Monmouth. Gordon Locke proved to be too much on his final game at Iowa Field. Locke rushed for four touchdowns and the Hawkeyes stomped jNW 37-3.