It's Not Plagiarism If You Link To It: Kirk Ferentz Talks Iowa State

Share All sharing options for: It's Not Plagiarism If You Link To It: Kirk Ferentz Talks Iowa State

THIS IS WHAT OUR HAWKEYES LOOK AT ALL WEEK. 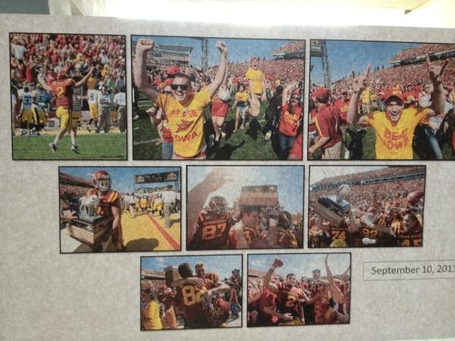 THERE'S VIDEO. Plenty of video. You can watch the Kirk Ferentz PC at the Gazette. KF also did a brief interview with the Big Ten Network. There's also Jordan Cotton and Zach Derby talking about the in-state rivalry. Finally, James Ferentz, James Vandenberg, Joe Gaglione, Keenan Davis and Micah Hyde interviews are at the Gazette.
THE TWO-DEEPS AND GAME NOTES. Not a lot of changes in the two-deeps. Greg Garmon is there as a kick returner. Darian Cooper is a starter. Kickoff is set for 2:42 pm (CDT) and the game will be broadcast by the Big Ten Network. Former Hawkeye Chuck Long joins Chris Martin and John Jansen in the booth.

THE CEDAR RAPIDS GAZETTE CREW MADE THE TRIP TO AMES MONDAY. They have video of Cyclone players talking about the upcoming game with Iowa. The main topic was ISU student fashion. A.J. Klein doesn't like seeing Iowa t-shirts on campus. Also, Paul Rhoads did some yelling. Marc Morehouse has video of Rhoad's weekly yell-conference.

WANT TO SEE HOW THE OTHER SIDE LIVES? Little brother blog Wide Right Natty Light jumped straight bullshit into hate week. They break down the first Iowa game with NIU and want us to cheer up. There's also a post on NIU losing their "Superbowl" and the fallout expected in DeKalb.

DAMON BULLOCK DOESN'T BELIEVE IN AIRBHG. "There's no curse" Bullock told the Cedar Rapids Gazette's Scott Dochterman. Bullock added, "You can look at like Brad Rogers and Jonathan Gimm. They've been here for the longest, and they haven't done anything. There's no curse, just bad decisions." To be fair, Rogers' heart condition sidelined him prior to Bullock's arrival on Iowa's campus.

BE READY DLINE, STEELE JANTZ IS COMING. Norhtern Illinois was a difficult test but this week's game will be even tougher. Dominic Alvis told Hawk Central's Ryan Scuhomel, "we can't have that slow start against Iowa State. We have to come out humping next week." Hopefully, Alvis doesn't plan to have sex with Iowa State, just beat them at football.

EDDIE VINCENT, PART OF FAMED STEUBENVILLE TRIO, DIES. Vincent arrived at Iowa in 1953 with Cal Jones and Frank Gilliam. The three players were part of a historic run in Iowa football history. Vincent was an all-Big Ten running back in 1955. He played briefly in the NFL and lived in Inglewood, California.