Taking a closer look at Iowa's big win over Minnesota.

* Getting up off the mat. At this point, the only thing less surprising than seeing Iowa suffer an inexplicable meltdown in a close-loss is seeing Iowa rebound with a strong performance the following week. In 2011, Iowa suffered that ghastly 22-21 loss to Minnesota, then bounced back with a 24-16 win over Michigan, easily their best win of the season. In 2010, Iowa collapsed late in a 31-30 loss to Wisconsin, then rebounded with an emphatic 37-6 destruction of Michigan State. In 2008, Iowa stumbled and bumbled to a 27-24 loss to Illinois, then came back with the brilliant 24-23 win over Penn State a week later. The formula even played out to a degree in 2009; Iowa suffered a narrow 17-10 defeat to Northwestern, then came achingly close to toppling Ohio State a week later.

The problem with all of those scenarios? They were essentially one-offs, not harbingers of future success. A week after beating Michigan last year, Iowa was dismantled by Michigan State. After annihilating Michigan State in 2010, Iowa did everything but lose against Indiana (and then promptly lost the next three games anyway). (2008 was an exception, since the breakthrough Penn State win really did change the course of that season.) This win over Minnesota was wonderful. It felt tremendous to get a win after last week's debacle -- and beating a bitter rival and reclaiming Floyd of Rosedale made it feel even better -- but the season isn't over. The season isn't half-over. The trick for this Iowa team is not letting this win be the high-water mark of the season. This win can't be an aberration.

* Unleash the Hammer. I don't want to belabor the point -- partly because Mark Weisman has been the headline figure for the last three Iowa games and partly because I'm working on an expanded look at his performance -- but there's no way to discuss Iowa's win over Minnesota without discussing Weisman's latest heroics. The Hebrew Hammer ended the game with 177 yards and a touchdown on 21 carries (a ho-hum 8.4 yards per carry average) and several punishing runs. His influence waned in the second half (not surprising, given the woes of the Iowa offense in general in that half), but overall it was another very fine performance for our latest hero, the third in a row. Enjoy the bye week, Mark -- you've earned a rest after the last three weeks.

* Getting defensive. Aside from Weisman, the other standout performers yesterday were the Iowa defenders. They were reviled last week after getting gutted like a fish by Central Michigan, but they snapped back to form in a big way yesterday. They held Minnesota to 299 total yards and 13 points yesterday -- and 77 of those yards and six of those points came at the every end of the game, when Iowa had already built a 31-7 lead and the game was well in hand. The defense forced four turnovers (one fumble and three interceptions, including Christian Kirksey's game-icing pick-six) and six punts (including four three-and-outs). They got pressure on Max Shortell (officially, two sacks and one quarterback hurry... but seemed like more pressure than that) and they bottled up the Gopher running game (102 yards on 32 carries). This was probably the most complete performance put together by the defense all year and it was a very welcome sight.

All three linebackers played well -- Anthony Hitchens had 12 tackles (1 TFL) and one sack, James Morris had 10 tackles (1 TFL), one sack, and one pass break-up, and Christian Kirksey had five tackles, one fumble recovery, and the aforementioned pick-six -- and deserve some love, but I thought the defensive line had a pretty solid day, too. Iowa rotated eight defensive linemen during the day, with Louis Trinca-Pasat, Darian Cooper, Steve Bigach, Joe Gaglione, Dominic Alvis, and Riley McMinn combining for 23 tackles (1 TFL) , one forced fumble, and one QB hurry. (The participation list also notes Carl Davis and Mike Hardy, so they saw time but weren't involved in any tackles in the game.) It wasn't a brilliant day and it's not likely to make anyone forget about the '08-'10 defensive lines, but it was still an encouraging sign. Our hope entering the season was that this unit would improve over the course of the season -- so far so good.

As far as the secondary... well, it would have been tough for them to have a worse week than they did against Central Michigan, and they didn't. There was (blessedly) less of opposing receivers running free and clear down the field and better coverage in general (Micah Hyde was credited with three pass break-ups and Tanner Miller and Greg Castillo got two of Iowa's three interceptions on the day). Speaking of Castillo... he is what he is, right? He's decent as a nickel corner, but he struggles at times when he has to cover a receiver on the outside. Unfortunately, B.J. Lowery's injury yesterday thrust him into that role. He did have a nice interception and, in hindsight, the pass interference he was nailed for was a not-terrible outcome (given the college rules, Minnesota gained fewer yards with the penalty than they would have with a completed pass), but he also seemed to get beat several times and generally had many of the same struggles he's always had when pressed into service as one of Iowa's main cornerbacks. There's a reason Lowery passed him on the depth chart, after all. When Lowery's healthy again (which should be soon), Castillo will no doubt resume his usual role.

* The trials and tribulations of the Mandenberg. As good as this win was, it was far from perfect. The main problem was the offense, which got off to a jittery start in the first half (and dithered around on their possession at the end of the half, which was irritating) and totally cratered in the second half. If it seemed like they didn't have much possession in that half... well, they didn't. Iowa held the ball less than nine minutes in the second half and ran only eighteen plays (and that's including Vandenberg's kneel-down at the end of the game). Those eighteen plays gained a whopping 41 yards and zero points. That was bad and the main reason why this game still made us a little antsy until Kirksey's pick-six. And the biggest reason why the Iowa offense went in the tank was the jittery play of James Vandenberg.

Stat-wise, Vandenberg's numbers don't look that bad: 18/31, 192 yards, 1 TD, no turnovers. Those stats don't tell the full story, though. They don't hint at the completions that came about only because of difficult catches by the receivers (Keenan Davis scooped a few passes from just off the ground). Nor do they say anything of the missed passes by Vandenberg; he had almost 200 yards passing, but with crisper passes he probably could have had another 75-100 yards easily. If Vandenberg was a golfer, critics would say he had the yips. He looks jittery and seems to consistently overthrow his receivers. Not every bad play in the passing game was his fault -- there were a few plays where his receivers seemed to run the wrong route -- but many of them were and it's frustrating to see a quarterback with as much experience as he has regressing. Here's hoping that Vandenberg can use the bye week to a) settle down and b) get on the same page as his receivers.

* Rise of the big uglies. Aside from the emergence of Weisman and the improvement of the defensive line, the most pleasant surprise from this Iowa team over the past five games has been the dramatic improvement of the Iowa offensive line. They were not remotely in sync early in the season and swung between extremes of competence (or lack thereof); one week they could run block but not pass protect, the next they could pass protect but not run block. Lately, though, they've gotten pretty proficient at both. Vandenberg was sacked zero times yesterday and the line opened up gaping holes for Weisman to run through, too. Stiffer challenges await (most notably Michigan State, two weeks from now), but overall they've really made tremendous strides since the awkward opener against Northern Illinois. Andrew Donnal filled in at right guard for the injured Austin Blythe yesterday and did just fine, while the left side of the line (Brandon Scherff and the much-maligned Matt Tobin) opened up several of those gaping holes in the running game. At the start of the season, we thought the offensive line would be one of the strengths of this team; it took longer than we expected, but that's starting to seem true.

* Injury updates. Finally, three of Iowa's opening day starters were out of action yesterday -- Blythe, Lowery, and Damon Bullock. What's the latest on their statuses? Per Morehouse, the news is pretty good:

That sounds encouraging for getting Blythe and Lowery back in time for Michigan State, which would be very welcome. The news for Bullock is less encouraging, but he also absolutely shouldn't be rushed back from a concussion.

* BACON. But the most important takeaway from the game is this: Floyd is home. Thank God. 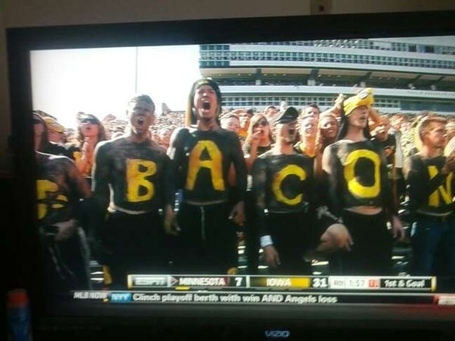