The Big Ten Betting Extravaganza: Week 5 - Keep it up

Intense research and comprehensive analyzation of this weekend's Big Ten lines to find you a winner.

Share All sharing options for: The Big Ten Betting Extravaganza: Week 5 - Keep it up

Last week I decided to take all of the money I had accrued on the season and put it into the pockets of the Ohio State offense. Oddly enough, they were already full by the time I got there, so I had to stuff it into their shoes. Unfortunately, it seems that all of that money weighed them down on the field and they ended up looking like hippopotamus shit. Some people would really let a tough loss like this linger, but not me. I've already forgotten about it. I've learned to not get too fired up even when it's raining shit on me. I certainly wasn't standing on my couch, frothing at the mouth and calling Braxton Miller a "goat-fucking shit stain." I swear. In fact, this is what I looked like after UAB had returned a blocked punt for a touchdown and then kicked a field goal to go up 9-0:

Anyway, maybe my poor choice last week was from lack of motivation. Maybe I realized that all the dick accessories that I wanted to buy weren't really viable. To be honest, I don't even know where they sell cock hats and motorbikes. So this week I've decided to set my sights on something a little more reasonable. You know, something I can use on a daily basis. This week, I'm playing for Tyranosaurus Rex heels. 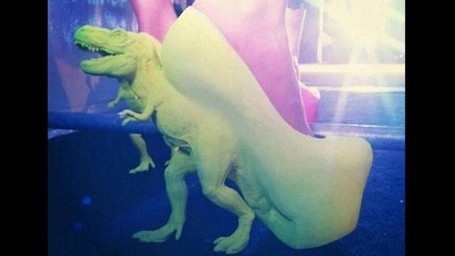 I've already started constructing a scale model of Ames out of Legos.

Now that I've got an enteirely new level of focus, let's have a look at the grid: 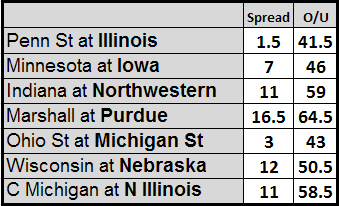 So, I threw that last one in there because two of Iowa's previous opponents are playing each other and the one they beat is double-digit favorites over the one they lost to. I'm pointing this out just in case you needed confirmation that Iowa lost to a real shitpile of a team last week.

With each passing week it seems a little less likely that Wisconsin is going to snap out of it and become the Big Ten Wrecking Crew that everyone thought they would be. You and Kirk Ferentz could argue that they haven't lost a game that matters yet, since the conference schedule is just getting started, but they also haven't covered a spread yet this year. Nebraska, on the other hand, is 3-1 ATS. Guess who the only other team in the Big Ten is who hasn't covered a spread yet. I'll give you a hint, it rhymes with Shmiowa Shmawkeyes.

A few words on Iowa:

LOL at Minnesota being undefeated and still a 7 point dog to 2-2 Iowa. I, for one, absolutely cannot fathom taking Iowa as a favorite at this point. I was expecting this line to move down this week, but apparently nobody thinks Minnesota is worth a shit. Not enough to put money on them, anyway. Must be some bettors out there that still believe in the magic of Kinnick. I've seen the O/U move to 47 in some places, which would be an implied score of 27-20 Iowa. That sounds great, but I certainly wouldn't bet on it. Especially considering that Minnesota has covered the spread vs Iowa 5 out of the last 6 times. Guess which year they didn't. I'll give you a hint. The spread has never been 56 points.

Penn State hasn't hit the over yet this year and hasn't really even come close. This trend isn't lost on the oddsmakers as they set it at 40.5, which is the lowest of the season for PSU. The only time Illinois has hit the over this year is when the other team beats the living piss out of them and almost hits the over themselves. This one is screaming under and if it happens, Vegas might have to put it at 17 for PSU next week.

Northwestern is on roll, going 4-0 straight up AND against the spread so far this year. But if there's one thing you can never forget as a fan and as a gambler, they are still justNorthwestern. They're undefeated, playing at home, against maybe the worst team in the league and are favored by 11 points. This is exactly the type of game that these assholes end up losing straight up. And hopefully they do, because fuck Northwestern with the wrong end of a rake. Also, I'll take the under.

Purdue to cover 16.5 vs Marshall. Yeah, it's the biggest spread on the board again, but Purdue is 3-0 ATS this year and they've done it convincingly every game. I'm chalking them up for a three touchdown victory and I'm preparing myself for some serious stomping.