Statistical In-Ferentz: Chippe-whaa?, in which we offer a smorgasbord of INTERESTING FACTS about a TOTAL FIASCO. 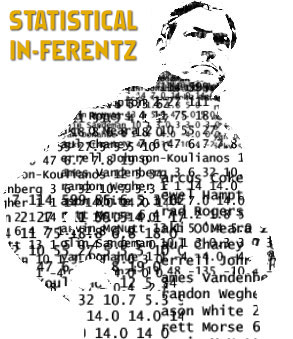 This week's entry will be more of a smorgasbord of interesting facts than a single, continuous theme, reflecting the fact that the CMU game seemed to be just one damn thing happening after another, without logic or coherence.

FACT OF INTEREST #1: Weisman was very, very good (and a little bad)

We all know that Mark Weisman ran for 217 yards and had some of the most awesome defensive back-disrespecting runs since the heyday of Frank Duong, but he also had one of the worst plays of the day when he fumbled on 1st and 10 at the Iowa 16. But did the good he did outweigh the bad? By looking at the effect his plays had on Iowa's win probability*, we can get a sense of his overall impact:

That adds up to just about +.37 WP on the day for Weisman -- not too shabby, even considering the fumble (the highest WP total for a running back in the NFL this past week was +.29). Of course we shouldn't assign credit solely to Weisman on these plays; the entire team, especially the offensive line, deserves kudos for Weisman's dominant day.
* All WP values calculated using the Advanced NFL Stats WP calculator. All previously mentioned caveats about using an NFL calculator for an NCAA game apply.
One note is the hugely negative effect his 3rd down run for -1 yard in the fourth quarter had (#10). It forced Iowa into a very tough 4th down situation where the Iowa coaches had to choose between a long field goal into the wind and going for it on 4th down. Iowa's coaches probably got too conservative on that play, opting for the safe run (thus avoiding a sack which might have pushed them out of field goal range) instead of a slightly more risky pass (which might have given them a first down at the Chippewa 20-something). Instead it left Iowa in an agonizing no-man's land position, leading them to waste a timeout as they struggled to decide whether to go for it or kick. Speaking of which...
FACT OF INTEREST #2: 4th Down Non-Follies
You have to give credit for Iowa largely making the right calls on fourth down in this game, but the field goal choice here was a little questionable. It worked out, but what odds would you have given going in that Meyer would make a 46-yard kick into the wind? The Advanced NFL Stats 4th Down Calculator rates taking the field goal as equivalent in terms of WP as going for it, but that assumes NFL kickers in average conditions. Given a college kicker in definitively bad conditions, I would have to imagine that going for it would rate as the slightly better choice. Meyer made the kick, of course, and it's not like going for the field goal was a massive mistake, but it did require a remarkable kick for the decision to work out.
Otherwise, the Hawkeye coaches did a fine job on their fourth down calls. The 4th and 1 from the CMU 34 in the first quarter was a pretty obvious go-for-it situation, and it paid off immediately with a Weisman touchdown. But Iowa also went for it on 4th and 4 from the CMU 37 early in the second quarter. That one didn't work out, but it was the right call. No choice is great in that situation -- a punt to maybe the 10, a very long field goal, or going for it -- but going for it was marginally the better choice. In fact, you could argue that Iowa was the bolder team in terms of 4th down decision-making in this game; CMU took a field goal on 4th and goal from Iowa's 3 when they were up 20-14.
The fact that Iowa made the right calls on fourth down and still lost a heartbreaker just goes to underline how marginal these tough calls really are in the grand scheme of things. Iowa made the right strategic moves, but still lost the game thanks to more fundamental weaknesses with their defense and their bad habit of getting penalties called on them at inopportune times.
FACT OF INTEREST #3: Those last two minutes
Iowa's defense did not exactly cover itself with glory in the last minutes of the game. First, the coaches stuck with the same standard 4-3-4 zone look, even though CMU had gone exclusively to four wideouts and a hurry-up look, then tried to switch a nickel back in hurriedly, leaving the defense confused about their assignments. Ryan Radcliff took advantage of the soft zones and wide-open gaps offered by Iowa's linebackers and corners to move the ball quickly up the field. Micah Hyde also made a crucial error gambling for the pass deflection on CMU's touchdown. By reaching for the break-up, he left himself out of position to make the tackle on Chippewa wideout Titus Davis, who shook Hyde and walked into the endzone. A short catch in-bounds would have actually been preferable to a break-up at that point, given that there were only 45 seconds left in the game and CMU was down to its last timeout.
Now, on to the debacle of the onside kick. Surprisingly, the recovery was not the most important (in terms of WP) play of the game. That honor goes to the personal foul called on Joe Gaglione soon afterwards. The recovery dropped Iowa from a WP of .99 (essentially guaranteed to win) to .84, but the penalty dropped Iowa from .93 to .66 (-.27 WP). It turned what would have been a 3rd and 6 from the CMU 46 into a 1st and 10 from the Iowa 39 and, crucially, stopped the clock. It was difficult to see on the broadcast exactly what happened between Gaglione and the Chippewa offensive lineman on that play, but the penalty improved CMU's chances of winning tremendously.
FACT OF INTEREST #4: Violating the rule of Norm
For all those fans who expressed frustration with Norm Parker's near invariable adherence to a cover 2/quarters look, a Chippewa touchdown in the 2nd quarter offered a helpful reminder of why it maybe wasn't such a bad strategy. CMU had a first and 10 from the Iowa 29, and Iowa, anticipating a first down run, did something Norm probably would have frowned on: they brought a safety in from the secondary on a run blitz. Tanner Miller came down from his high position and hovered near the line, ready to swallow up any back who tried to bounce it to the outside. Unfortunately for the Hawks, CMU had a play action call on, and it worked to perfection. The other safety, Tom Donatell, the only deep defender left, was sucked in slightly by the fake and wound up covering only a middle-deep zone. That left corner BJ Lowery one-on-one with Titus Davis, who absolutely roasted him with a post-corner-post move. Here's how it played out on the field: 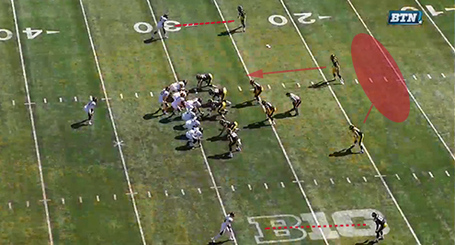 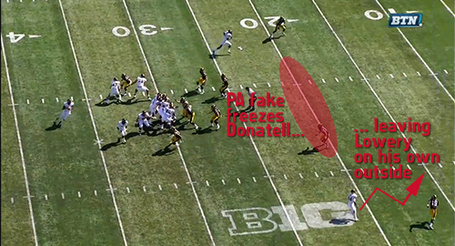 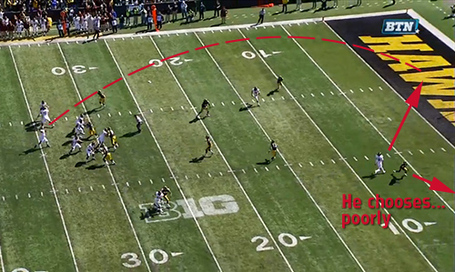 Just a reminder that using two deep safeties at all time may be boring, but it does tend to cut down on the number of long plays like this.