(Talking on the telephone) This Weisman thing is a huge blessing. We are now one step closer to finally running a two fullback, three tight end system. My god, think of the execution *snort* I think I just chewed through this piece of gum in excitemen- whoa, speak of the devil, here is the man now. I'll talk to you later Ken. Uh-huh, uh-huh, I will give James a hug for you. Bye.

Coach, I don't want to be a bother.

Oh, you're no bother at all, you big ol' fullback.

Oooooooookay. I wouldn't usually stop in like this, but something is up. I mean, something is going on, but I can't put my finger on it.

Well, whatever it is we'll take care of it. You want the ball more, is that it? One phone call to Greg and you'll carry the ball the first 20 plays against Central Michigan.

I don't need more carries. In fact, this isn't really even football related. Things just haven't felt right since Saturday, you know? Things have started to come up and today might just be the straw that breaks the camel's back.

Well, I was walking home from practice, minding my own business and a tree nearly fell on me.

A tree almost fell on you?

Yeah, it's not windy or really that cloudy or anything, but I hear this big ripping sound and all of a sudden this big tree is coming right at me. Fortunately, I slid right under it. 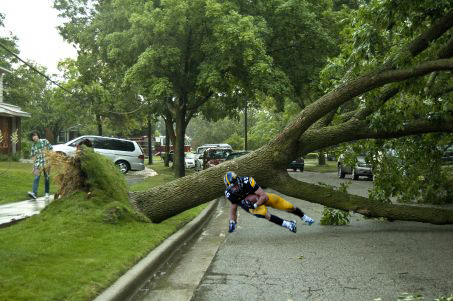 Oh, I'm not done. Now I'm closer to downtown Iowa City, when all of sudden this car comes speeding around the corner and loses control. Now it's headed sideways right for me on the curb.

That's what I thought, but I managed to hurdle over it as it got lodged on the curb. 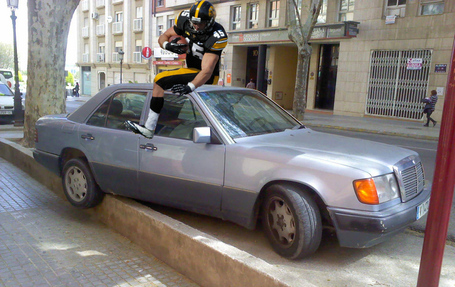 You're really having some bad lu-

I'm not done. Now I'm still near the downtown area and they have a bunch of cones set up, so I'm thinking construction. I walk along the street when suddenly it gives way and now I'm inches away from a humongous sinkhole, I nearly lost my wallet. 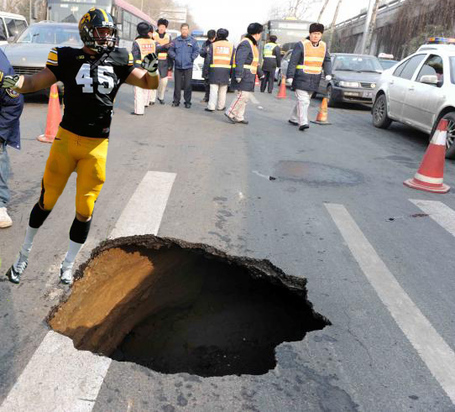 Wait, wait, all of this happened to you on your way home?

Yeah and I'm not done, I get to that beautiful park. The one with the fountain. And all of a sudden I get attacked by a ninja, but its not just any ninja. It's a kid, like from that movie 3 Ninjas. Have you seen that? 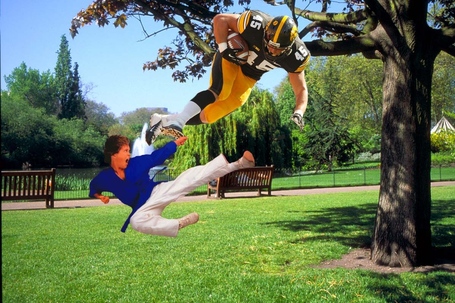 The good news is that it's just a kid, so I kind of jump and kick him and he's out cold, but now I'm starting to freak out a little bit. I mean... fallen tree, runaway car, sinkhole, tiny ninja, things aren't adding up. Finally, though, I get to my house... 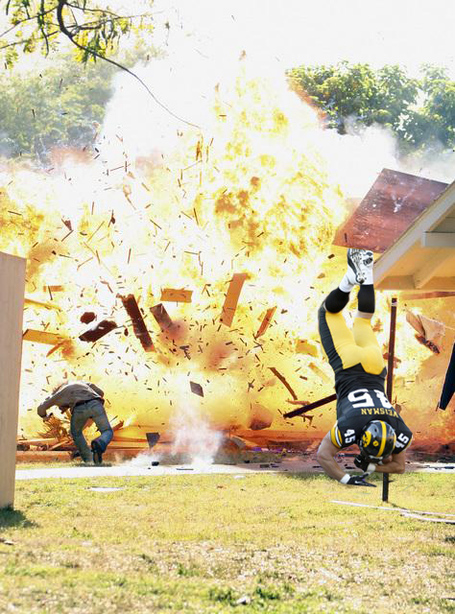 Yeah, you heard me, it explodes and I end up landing square on my head.

This cannot be happening again.

Anyway, at this point with everything that's gone on. I decide I've gotta head back to the football offices and tell you about it.

But I must have hit my head really hard because I can't find my way here.

How many times have you made the trip here?

Probably close to 200 times by now, but this time I'm walking in a forest next to a river.

Well, there was this bear. 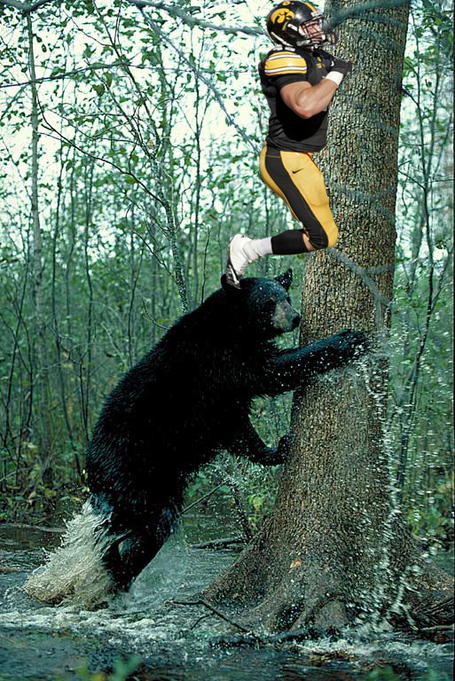 It's fine, though, you don't get into the Air Force unless you know how to climb, at least that's what my uncle told me, and I got away from that bear.

And then you came right here.

No, then I found myself in a cave. I don't know what exactly I was thinking, maybe I thought the football offices has some kind of underground entrance like the bat cave, but about 200 yards in I found the skeletons and that was my cue to turn back.

You don't have to tell me the rest. 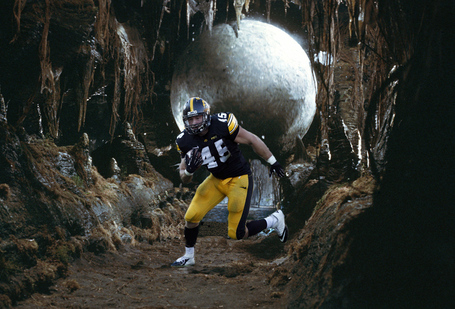 So what do you think? I was kind of telling my sob story to the receptionist and she mention some kind of curse. There's no curse, right?

Curse? What? Curse? Absolutely not. There's no curse? Curse? Bah! Am I saying curse a lot?

Yeah, you really are.

Mark, there is nothing to worry about, there is no cur- Wait. Did you wear your full uniform and pads back home?

Yeah, I like to shower at home with my shower radio.

Are you crazy? Don't do that! He'll feel like you're teasing him.

Grab your things, I'll drive you to our house until we can get you a new living arrangement.

Thanks coach, you're a lifesaver.

OK, now this is the weirdest day ever. Are you alright coach?

Yeah, I'm fine, but If it's alright with you, I think we'll just lay here peacefully until Saturday.

It begins to rain and a wolf howls in the distance