The Big Ten Betting Extravaganza: Week 3 - We Got One

Share All sharing options for: The Big Ten Betting Extravaganza: Week 3 - We Got One

We did the research. We wrote the business plan. We executed it word for word. We submitted our picks. We watched and we waited.

If you'll recall, I took Michigan State to cover 20 points, which they did with ease. Now comes the decision on whether to let that money ride or to buy myself something extravagant like a 10-gallon hat for my penis. Tough call, but as irresistible as women find a man wearing a dick hat, I'm feeling good about my decision-making process, so let's keep it rolling.

I was particularly impressed with my discipline to stay away from those easy-looking lines. Wisconsin and Nebraska traveled west to play what appeared to be inferior opponents receiving single-digit points. Look what happened. They shit the bed and on the pillows and the floor and some way over there on the dresser drawers. As bad as that sounds, I imagine it's not the first time Bielema and Pelini have woken up on a Sunday morning in a shit-filled room.

Enough about those two jizzdumps, let's have a look at the grid. 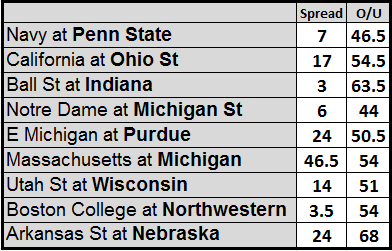 Every Big Ten team is favored this week, which probably means that the conference is a world class wrecking crew. Also, Indiana is favored for the second week in row, which means they have a football team. Lastly, there are no lines for Iowa, which means they will win by 1275 points.

So this is what it's come to:

It's hard to root against touchdowns, but I would happily bet that Nebraska and Utah State are physically unable to hit 68 points. In fact, if I were strapped down and tickled in the face with Paula Deen's pubic hairs I would probably just take all the unders.

Purdue covers the 24 points against Eastern Michigan. Normally I don't like Purdue to cover anything against anyone, but Eastern Michigan just got shit-rolled by an FCS team. A good FCS team, yes, but they still have 20 less scholarship players on their roster. (Hey, that's the theme for this weekend!) Give the points and starting shopping for a sweet new penis hat.