The Iowa football team has begun an exciting new charitable giving program, "Field Goals for Tweens", that will allow generous fans to donate money to needy children on the verge of adolescence each time a Hawkeye kicker lines up for yet another disappointing three-pont try. The new program was undertaken after Athletic Department officials realized that the regular "Touchdowns for Kids" initiative was struggling to raise sufficient funds (the "Touchdowns for Kids" drive has currently raised $828 per touchdown in pledges for the 2012 season for a total of $828 raised).

"We began to get a little concerned last week during the game against Northern Illinois," said "Touchdown for Kids fund administrator Dora D. Esplora. "The team had driven down to the opponent's three [yard-line], and the coaching staff sent Mike Meyer out there, even though the team was down four and C.J. Fiedorowicz is an unguardable man-mountain. It was a worrying play, both strategically and philanthropically."

The new program, which will be co-sponsored by the Disney Channel and the once-popular arcade chain Aladdin's Castle, will provide nine to twelve year-old patients with a wide array of age-appropriate entertainment during their stays at UI Children's Hospital. Episodes of "Suite Life on Deck" and "The Wizards of Waverly Place," as well as unlimited tokens on Teenage Mutant Ninja Turtles, Spy Hunter, and the coveted Neo-Geo console, will be made available to the sick near-teens.

"Those games and shows will be nice," said tubercular waif Annabelle Chiswick, "but what we need are medicines, hospital beds and the like. We were counting ever so much on those touchdown donations to tide us over until October, now I fear the team may never reach the endzone again." The adorable Dickensian orphan then coughed weakly. 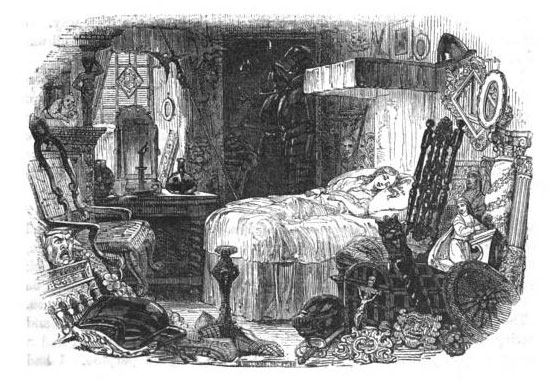 Annabelle Chiswick in her sick bed

When asked if he had any plans to alter his strategy near the goal line, either to aid the Touchdowns for Kids program or to increase his chances of winning football games, head coach Kirk Ferentz was noncommittal. "I spent many a happy hour in the late-'80s at Aladdin's Castle, doing my darndest to beat Cyberball," said Ferentz. "In fact, I got most of my football philosophy from that game. I learned that you have to make quick decisions, and that if your players get hit too much, they will explode. So I guess what I'm saying is I think the Field Goals for Tweens program will be of great benefit to these children, and that if Annabelle's young immune system just learns to execute its role correctly, she will have no need for expensive medicines."