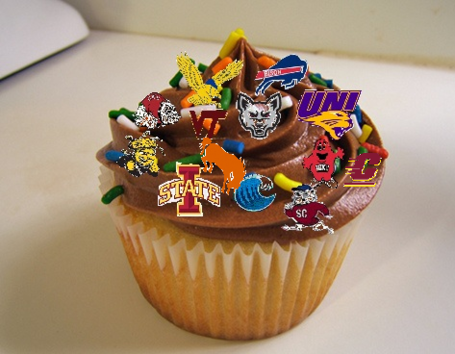 Iowa officially announced their 2012-13 non-conference basketball schedule yesterday and unless you're a Hostess executive, it's probably not exactly what you were hoping to see. 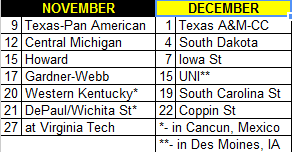 Let's cut to the chase: this is a pretty soft schedule. Iowa is playing precisely two BCS opponents: in-state rival Iowa State and their Big Ten-ACC Challenge-mandated opponent, Virginia Tech. Wichita State at least qualifies as a high-quality mid-major opponent, although that doesn't do the fans attending games at Carver-Hawkeye any good. The best non-Iowa State opponent they get to see is... um... Western Kentucky? They did make the NCAA Tournament last year (as a 16-seed). It's fortunate for Gary Barta that the novelty of fielding a winning team and playing exciting, fast-paced basketball hasn't worn off yet for Iowa basketball fans because a slate like this is not going to inspire many season ticket sales by itself.

What this schedule lacks in excitement, though, it makes up for in winnability. This is a schedule built for wins -- lots of wins. One true road game, three neutral-site games, and a host of home games against lesser-rans? This lineup isn't going to do Iowa's RPI any favors at all, so they need to make sure they rack up as many wins as possible. I think getting anything fewer than 10-11 wins out of this schedule would be a disappointment and 11-12 wins is certainly doable. Hell, running the table is not implausible -- the ISU, UNI, and Wichita State games look like the trickiest obstacles and none of them look insurmountable -- but it's probably not fair to set that bar quite that high. This is a team that was barely over .500 last year and lost their best player (Matt Gatens).

This is also a schedule built for gaining confidence and experience, which could be crucial for a team that might be starting two freshmen (Mike Gesell and Adam Woodbury) this year. I doubt games against Gardner-Webb and Texas A&M-Corpus Christi are going to do that much to prepare them for the rigors of Big Ten play, but there's something to be said for not throwing freshmen right into the deep end, either. I think we'd much rather see them head into Big Ten play with confidence

So, no, this schedule is not exciting -- far from it. I don't think you're going to be running to your calendars to circle December 4th (you're going down, South Dakota!). But we'll forgive that if Iowa can enter Big Ten play at 11-2 or 12-1 because that will put them in position to legitimately contend for an NCAA Tournament berth. Of course, we thought the same thing last year and they went 8-5 in non-conference play. No more Campbell-type losses this year, please.