A Punt of Ferentzes Descends Upon Iowa Media Day

Share All sharing options for: A Punt of Ferentzes Descends Upon Iowa Media Day 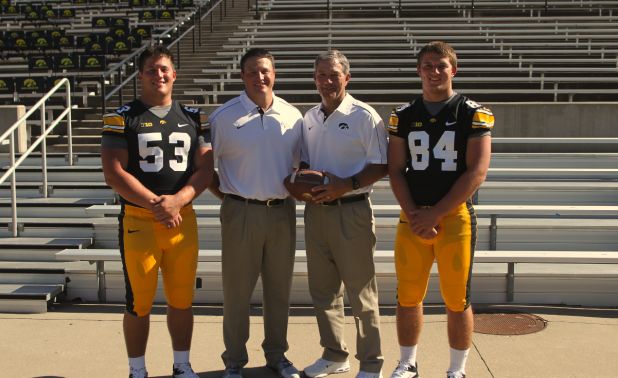 (via @GarmanSports and UI Sports Information)

One of the wonderful things about the animal kingdom is humanity's seemingly endless fascination with coming up with bizarre names to describe groupings of certain animals. We don't even think about some of them -- a herd of elephants, a pride of lions, even a murder of crows. Some are more... obscure -- a battery of barracudas, a sloth of bears, a kindle of kittens (just what terrible secrets is Amazon keeping from us?!). And some are simply wonderful for their pure batshit insanity -- a destruction of (wild) cats, an implausibility (!) of gnus, a rhumba of rattlesnakes. Clearly, these were the work of naturalists who ate the berries your mother warned you not to eat.

But, lo, there was an exciting new assembly of creatures on display at Iowa's Media Day yesterday: not one, not two, not three, but four Ferentzes (Ferentzii?). But what do we call such an incredible grouping? A flock? No, they don't fly; Ferentzes are really rather stationary. A herd? Well, they are offensive linemen (except for the paterfamilias, a former linebacker), but no -- they're not big and dumb. A congress? No -- while they are well-skilled in the art of talking a lot and saying nothing, they largely shun the spotlight and disdain gladhanding. And then it struck me: only one word could fully capture the most Ferentz-ian qualities of the Ferentzes, the same word we use to describe Kirk Ferentz's secretly favorite play in football -- the punt. And so, in the spirit of those berry-snozzled naturalists, I claim a new meaning for the word "punt" -- a gathering of Ferentzes. May we spot many punts of Ferentzes this fall.

(In all sincerity, kudos to Captain Kirk. Being a football coach can be a pretty lonely, solitary endeavor and one that keeps you away from your family for long stretches of time, so being able to bring his football life and his family life together this fall and spend a little extra time with his sons should be a pretty special experience for him.)