Kirk's Works: Counting down the Top 25 wins of the Ferentz era - Number 20

Share All sharing options for: Kirk's Works: Counting down the Top 25 wins of the Ferentz era - Number 20 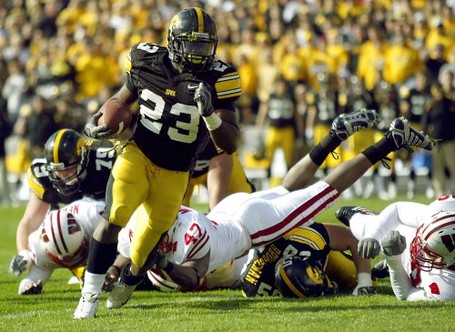 This list does not have many games that are solely memorable for an outstanding performance, even Albert Young’s beastmode game against Michigan State was compounded by a pair of overtimes.

So, just as he proved multiple times during the 2008 season, Shonn Greene is one of a kind.

The seeds of a big day were planted early in the first quarter when Greene expertly followed his block and scored on a 12-yard touchdown.

I don’t think anybody, though, expected what was coming, beginning with the signature run of Greene’s season (with apologies to Frank Duong) --- a cutting, weaving, punishing gallop that left four Badgers in its wake.

People kind of forget that Wisconsin opened the second half with two field goals to pull within five points past the midway point of the third quarter. They forget because Greene answered with touchdown number three (on a draw that seems to work every time Iowa runs it) and then put the finishing touches on his big day with a fourth touchdown on a toss play that made it 38-9. Wisconsin scored a touchdown late, but who gives a crap.

Heroes: Yeahhhhhhhhh, we’ve kind of covered this already. Greene finished the game with a career-high 217 yards during the game and was the first Iowa running back since Tavian Banks to score four touchdowns. The other touchdown Iowa scored on the day was also pretty impressive as Allen Reisner reached back for a one-handed catch, received a block and went the rest of the way untouched for a 16-yard touchdown. Wisconsin was not exactly an offensive juggernaut (there’s no way Dustin Sherer would have made it in the ACC), but Iowa forced three turnovers and held the Wisconsin rushing attack to 158 yards.

Important? As a team? No. Iowa somehow used the momentum of their blowouts over Indiana and Wisconsin to lose to the Zooker. The rest of the year turned out OK though. It was hugely important for Greene, though, who earned national recognition for his performance. The game seemed to kick start his wild card Heisman campaign.

Personal memories: 2008 was the first fall after I graduated and I made sure to return to Iowa City as often as possible. I took in four games in all, all wins. This was not one of them. *Sigh* I should have gone to grad school.