INPIYLTI: Football Practice Has Begun And There's Pictures And Videos

Share All sharing options for: INPIYLTI: Football Practice Has Begun And There's Pictures And Videos

THANKS TO HAWKEYE SPORTS. 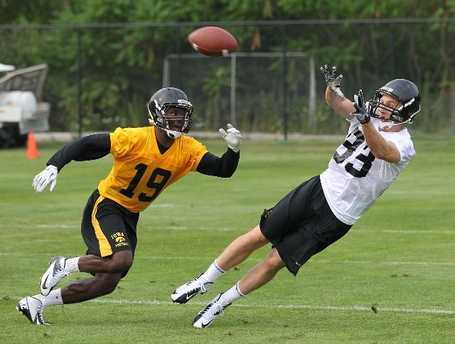 BRIAN FERENTZ HAS BEEN TWEETED UP A STORM. Nothing news breaking but still, here are some examples:

Getting ready for the 2pm meeting with our guys - work continues on the 2012 #Hawkeyes.

Very up-tempo this morning. We are making progress but have a long way to go. #PreparingToBeTheBest

TODAY IS IOWA FOOTBALL MEDIA DAY. Ferentz will speak at 1:30 pm CDT and you can watch on Hawkeye Sports ($). We'll update the comments section here if news breaks and of course, a complete recap will be available in tomorrow's INP.

IT'S HIS TEAM. Ryan Suchomel, of the Des Moines Register, writes that James Vandenberg is ready to carry the load. Vandenberg graduated this Summer and has more time to focus on football. That strategy seemed to work for Ricky Stanzi even though the record in 2010 wasn't what he had hoped. Vandenberg wants to rectify his road record and losses against rivals Minnesota and Iowa State.

FASTEST WAY TO A MAN'S HEART IS THROUGH HIS STOMACH. Does that hold true for football prospects? Iowa is going to find out. Last weekend, Iowa invited current football verbal commits along with several other 2013 and '14 prospects to a BBQ.