Share All sharing options for: The Big Ten Betting Extravaganza: Week 1 - The Return

It's back. Football is back. The Hawkeyes are back. Tailgating is back.

Oh yeah, and gambling is back. Time to dance the dance of life.

When I did this post two years ago I let you guys vote on who I should bet on. That went poorly. I'm not blaming the now you guys, I'm blaming 2010 you guys. This year I'm so excited (and unorganized) that I haven't decided on a true weekly format for this, but rest assured there will be spreads and over/unders and commentor polls and real money and making it rain and wave runners. So buckle up, and let's all turn into fucking millionaires and buy mansions next to each other.

I'd better mention that I'm just going to pull the lines from whatever site I feel like on a given week. There's very little consistancy here, so don't bust my balls about half points here and there. Also, I'm not an expert on anything except helicoptering my own dick, so if I tell you to take Indiana -28.5 and you end up losing money, guess whose stupidass fault that is. Remember we're just here for fun and entertainment and motherfucking wave runners.

Alright, let's quit pussydicking around have a look at those lines. 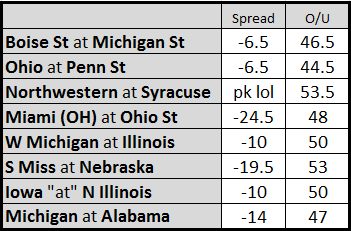 My biggest flaw in gambling (other than not knowing shit) is that I bet with my heart. My pick this week based soley on that is Michigan St to cover 6.5. I'm pretty much like "fuck Boise State" at this point, so I really want them to get completely piss-pounded into the turf in this game and every game. MSU looks like they're going to be tough this year, but those goddamn Boise smurfshits always seem to pull off some ridiculous win over a real opponent before spending the rest of the year trucking high school teams and crying about the BCS. Still, I like MSU.

The other game where I'd be betting with a handful of wishes is Michigan +14. If Michigan gets beat by more than that, I'm not turning on ESPN for a month for fear of seeing Skip Bayless gentley caressing Nick Saban's cock with his tonsils.

One of the most intriguing games is PSU - Ohio because there's going to be all eyes on Penn State to see how they come out of the gate this year. They lost their starting RB and couldn't get rid of their starting QB, neither of which bodes well for them. Also, Ohio is returning a QB that put up a combined 4000 yards last year. But in the end, the MAC is the MAC and even with some attrition, Penn State is obviously a more talented team. I just think that it's going to be such a emotional game for the players and fans that they'll come out and take care of business against a lesser opponent. Plus, if they don't...they are so very fucked.

By the way, jNW was a 1-point favorite on a couple sites and Syracuse was the favorite on others, so I went with a tossup. Usually I want Big Ten teams to fare well against other conferences, but it's just the Big East and justNorthwestern can eat my shit.

I've blathered on for long enough, let's see what you guys think.

I'm leaving Iowa off the poll, because they're gonna cover 10 with ease and you're all a bunch of homers. Also, in the interest of space I'm not putting every single option on there. If you see an over/under that you love, or you think Western Michigan is a money maker at +10, tell us about it in the comments.