Kirk's Works: Counting down the Top 25 games of the Ferentz era - Number 1

Share All sharing options for: Kirk's Works: Counting down the Top 25 games of the Ferentz era - Number 1

It says it right on the man's jersey (Chris Donahue/Hawkeyessports.com)

What the hell just happened? See above. There's probably no need to rehash this game, I've replayed it in my head at least 30 times by now (and we always win!) and I'm sure most Hawkeye fans have done the same. But for posterity's sake, let's touch on some of the highlights. 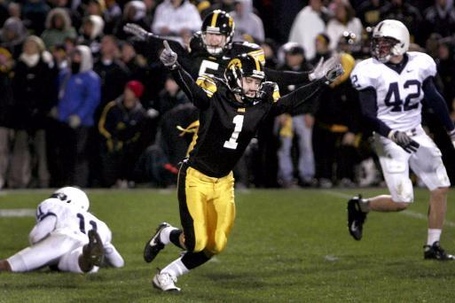 Heroes: Almost too many to count. Let's start with Murray, a hometown boy who had not attempted a field goal since the Hawkeyes' season opener with Maine, but came in fully prepared and kicked the second-most famous kick in Iowa history. There's Stanzi who played... well a Stanzi game. He passed for just 171, had a fumbled snap and threw a bad interception, but also hooked up with DJK on a fantastic pass play and then led his team when they needed it most during the fourth quarter. There's Mr. Reliable, Shonn Greene, who picked up more than 100 yards again during the student section's Greene Out and scored two touchdowns. There's Tyler Sash, who started his legend on this day with his key interception. There's the Iowa defensive line, there's DJK, there's Brandon Myers, there's Ryan Donahue. Totally a team victory.

Important? There's nothing that I could write that will top this. So do me a favor, click on that link and revel in the victory one more time.

Personal memories: My Dad is not big on celebrations. I've attended a number of games with him during my life and most of them consist of three things: him clapping, him muttering and him reluctantly accepting high fives from the slightly inebriated fans around him. He's just not a very rah-rah person and I would not have him any other way. He doesn't even really stand during games unless the people in front of him are standing because now he cannot see. Now you're probably not going to believe this, but there were a lot of people standing right before Murray attempted his kick and that meant both me and my dad were standing as well. I closed my eyes, said a prayer and opened them just as the ball was snapped. The kick was up, it was good and the whole stadium went crazy. I was jumping up and down, yelling, clapping, awkwardly fist pumping and then I finally turned to my dad. He stood quietly with a huge grin and his arms outstretched in the air. I remember Greene's first run, I remember the goal line stand, I remember Sash's interception, I remember Murray kick, but the moment I will always cherish is turning to my Dad, seeing his big smile and his big arms up high and knowing that we were thinking the exact same thing: "It was good."

Epilogue: So there's the list... at least ours. Yours is probably very different and that's great. Our individual lists were not the same either. The great thing about college football and all sports in general is that personal memories often trump wins and losses. We all see the same score, but none of us share the same memories. One of the best parts of this countdown was reading the recollections that commenters shared about individual games. Some were heartwarming, some were almost too crazy to believe and some involved consuming alcohol (OK, most, not some). All were personal though and that is what mattered. So now it's a little more than 24 hours until the Hawkeyes kickoff their 2012 season and nobody knows exactly what is going to happen this year, but I'm pretty sure on three things: we're going to win some games, we're going to lose some games and we're going make a ton of memories while doing both. I can't wait.