Kirk's Works: Counting down the Top 25 wins of the Ferentz era - Number 2

Share All sharing options for: Kirk's Works: Counting down the Top 25 wins of the Ferentz era - Number 2 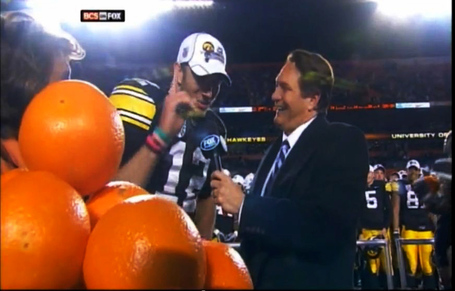 Number two on our list, number one in America's heart

What the hell just happened? Hawkeye fans had waited a long, LONG time for this moment. The seconds ticked off, the Gatorade got dumped and the final whistle sounded and just like that all the bad memories were gone: Jacque Robinson, Ronnie Harmon's concrete hands, 33-7, the entire second half of the Orange Bowl.

Finally after 51 long years, Iowa had another victory in a BCS bowl game.*

And they earned it with a defensive performance that past Hawkeye teams of any era would appreciate.

Heading into the game, there were two key questions surrounding the Hawkeyes: How would Ricky Stanzi look after his ankle injury? and Would a strong Iowa defense be able to stop the vaunted Yellow Jacket option attack?**

By the time college football fans went to bed on January 5th, there were two different questions on their minds:

1) Does Ricky Stanzi really love America that much?

2) Boy, that Adrian Clayborn is going to make a lot of money, isn't he?

The answer to both queries was a resounding YES.

*It's obviously worth noting that before the BCS started in 1998, Iowa had a shot at the Rose Bowl and that's it, but still, each of those previous Bowl losses we're brutal.

**The questions on the Georgia Tech side were much easier: What did you think of the Battlestar Galactica finale? and Hey ladies, would you like to see my Ramblin' Wreck?

You may never see again an Iowa defense play as well as the Hawkeyes did in the first half against Georgia Tech. The Yellow Jackets had the ball seven times in the first half and did absolutely nothing. And this is not an exaggerated nothing: Georgia Tech (the second-best rushing team in the nation, mind you) finished the first two quarters with seven yards of total offense. SEVEN! That's a pretty small number, but definitely not as small as zero which was the number of first downs had in the first down.

In fact, one of the great pleasures of the game was watching the Yellow Jackets punt, not once, not twice, not thrice but seven times after being beat over the head by the stat that Georgia Tech had not punted at all in its last two games.

Georgia Tech eventually got its offense going for a stretch of the second half (when they made it their life's mission to avoid Clayborn) and even pulled within three points in the fourth quarter. But make no mistake, this game was never in doubt (not even when Ferentz picked the weirdest possible moment to become Les Miles and have Daniel Murray run for his life). The Iowa defense was not going to let this one slip away.

Offensively, Iowa exploded out of the gate, took advantage of the foreign (at least to the ACC) concept of a tight end and jumped out to a 14-0 lead in the first quarter. Stanzi decided to really put the nail in the coffin by throwing a pick six (he was undefeated when it happened in 2009) and that was all of the scoring in the first half.

The offense kind of sputtered throughout the game after the fast start, but when Iowa needed to run out the clock late, the Hawkeye O rose to the occasion with Brandon Wegher taking his final carry in an Iowa uniform 32 yards for the clinching score.

All that was left were high fives, Gatorade baths and a hilarious attempt by Georgia Tech to move the ball through the air. The Yellow Jackets turned the ball over on downs and Stanzi took a knee right onto America's heart to finish off the victory.

Heroes: The whole Iowa defense deserves credit, but this was Clayborn's game. The defensive end set the edge and never let Georgia Tech get past it, finishing the game with 9 tackles, 2 sacks and 2 tackles for loss. A.J. Edds added an interception in the game and Pat Angerer did Pat Angerer things. Of course, the other hero in the game is Fox sideline reporter Chris Myers who formally introduced the world to Ricky Stanzi: American Quarterback and provided BHGP with years of content. USA Number 1!

Important? This win is without a doubt the most prestigious of the Ferentz-era and it provided the fitting conclusion to one of the most magical and successful seasons in Iowa history. A lot of Hawkeye fans were probably disappointed that the win did not come at the Rose Bowl, but a BCS win is a BCS win (hell we've only had three all-time) and oranges provide wonderful calcium and vitamin C.

Personal memories: There's no wonderful back story here. I watched the game at home, I celebrated with every big play and sulked with every bad one, and I think afterward I took out a congratulatory bag of garbage. I have a feeling the circumstances were different for a number of you, so keep sharing your stories.