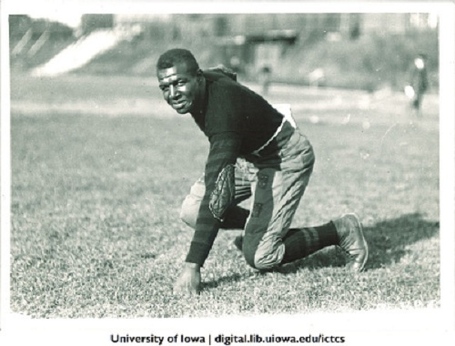 Duke Slater (December 9, 1898 - August 14, 1966) was born Frederick Wayman Slater in Normal, Illinois. Duke's father would move his family to Clinton, Iowa, where he would serve as a pastor in the local Methodist church. Duke played high school football for Clinton. His senior season the Clinton team would meet West Des Moines High in the state final. West Des Moines, led by future teammates the Devine brothers, battled Clinton to a tie 13-13.

Slater's father didn't like the idea of his son playing football. Duke would begin his high school career without his father's knowldege. Finally, he relented but when it came time to purchase a helmet and shoes Slater's family only had money for one. Slater would play most of his football career without a helmet.

Slater played football his first year on the Iowa campus in 1918 because of World War I freshman eligibility rules temporarily changing allowing him to play. He'd earn honors his freshman football season. He was named to the all-Iowa team by the Des Moines Register.

Slater was an imposing figure in his time. Although it's small today, at 6'2" 215 pounds Slater was a force. Following Iowa's defeat of Notre Dame in 1921, famous Fighting Irish do-everything player Hunk Anderson said of Slater,

"Duke repeatedly swept me out of the way by body-blocking me from the side. Frequently, I found myself sitting on the grass."

"so powerful that one man cannot handle him and opposing elevens have found it necessary to send 2 men against him every time a play was sent off his side of the line." 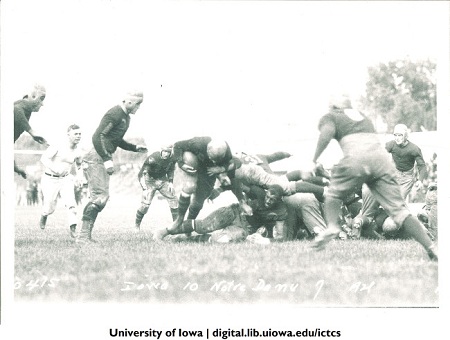 Duke Slater's accomplishments are amazing considering the era. Jackie Robinson didn't break the color barrier in professional baseball until 1947. Slater was one of the first, and for a time, the only African-American NFL football player (1927-29). (Slater's teammate Fritz Pollard is officially the first African-American NFL player).

Slater joined Kinnick in the inaugural class of the College Football Hall of Fame in 1951. Of the 45 first members of the CFBHOF, Slater was the only African-American. He was also named to the Iowa Sports Hall of Fame in '51 with Kinnick and former teammate Aubrey Devine. His name is on one of Iowa's residence halls. Slater Hall is the only residence hall named after a former athlete.