Kirk's Works: Counting down the Top 25 wins of the Ferentz era - Number 3

Share All sharing options for: Kirk's Works: Counting down the Top 25 wins of the Ferentz era - Number 3 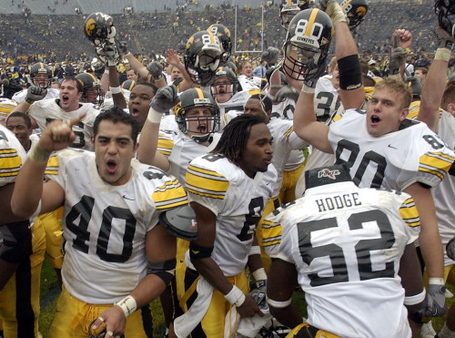 What the hell just happened? Oh just the complete domination of a top-10 Michigan team… in the Big House… on the Wolverines' homecoming.

Iowa’s previous (and, unfortunately in one case, ongoing) futility against the Big Ten’s Big Two was already well stated by Ross in the the review of Iowa’s win over Ohio State in 2004, but it’s worth repeating: the Hawkeyes have beaten the Wolverines just 13 times and that includes the current winning streak Iowa has been on.

When the Hawkeyes traveled to Ann Arbor in 2002, they had not beaten Michigan in 12 years (you know, when Brad Banks, Eric Steinbach and all the other Iowa seniors were just 10 years old), so most Hawkeye fans would have taken any kind of win. 7-0? Sure. 3-0? Absolutely. 6-4? Sure, why not.

What Hawk fans got instead was a complete beat down. The Iowa defense held Michigan to just 235 yards of total offense, while the offense piled up 416 yards of offense and tallied four touchdowns. The result was a 34-9 rout that proved to be the Wolverines’ biggest home loss since 1967 (you know, when Kirk Ferentz was just 12 years old).

Iowa set the tone early, taking the opening kickoff and marching down the field before Banks hooked up with C.J. Jones on a jailbreak screen for a 39 yard touchdown that put the Hawkeyes up 7-0.

After a Michigan punt, Iowa added a Nate Kaeding field goal on their very next drive and the lead grew to 10. Things, however, slowed down in the second quarter and the contest became a game of punts.

Punts are usually Iowa’s forte, but not late in the first half when David Bradley took a snap deep in Iowa territory and just kind of dropped the football. Michigan recovered and then scored two plays to make it 10-6, but before Iowa could claim all of the special team derps. The Wolverines decided to shank the extra point and it was 10-6 Iowa at halftime.

Michigan added a field goal on its first drive of the second half and all of a sudden the lead was down to one. The Hawkeyes were even forced to punt on their next possession.

This time though, punting was winning for Iowa as a young lad named Robert Sanders knocked the ball away from returner Markus Curry and Iowa recovered. Three plays later, Banks hooked up with Jones again on a slant and the rout was on.

The next two Michigan drives went a grand total of four yards, while the Hawkeyes scored on both of their possessions. Each touchdown came from Jermelle Lewis, who punched the ball in from five yards on one drive and then provided the play of the game when he took a shovel pass (Wait, shovel pass? From Ken O’Keefe?) from Banks and ran over a Michigan defensive back en route to the end zone.

Kaeding added a second field goal and Iowa finished off this awesome victory by singing its own fight song along with a large contingent of fans.

"I enjoyed that," Ferentz said in reference to the singing, but hell he could have been talking about the entire game. "I’d be lying if I said I didn’t."

Heroes: Banks was his efficient self, going 18-of-29 for 222 yards and two touchdowns with no interceptions. Both touchdown catches were by Jones, who had eight grabs for 81 yards. Lewis had arguably the best game of his career with 109 yards and a touchdown on the ground and 32 yards receiving and another touchdown. And, oh yeah, the Iowa defense was top notch. Michigan had just 22 yards on the ground and the Wolverines leading rusher was John Navarre, who did not have a very comfortable day. 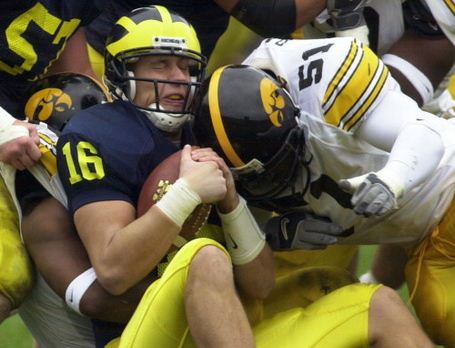 Important? Even with Iowa’s dramatic win over Purdue that Vint magnificently wrote about yesterday, a lot of the country still did not know what to think of the Hawkeyes. After the win over the Boilermakers, Iowa routed Michigan State 44-16 and then picked up a weird 24-8 win over Indiana that featured three red zone interceptions by linebacker Grant Steen to improve to 7-1, yet they were ranked just 13th in the country. Perceptions changed after this game: Iowa was featured in the next issue of Sports Illustrated and the Hawkeyes moved into the top-10. We’ve featured four games from the 2002 season with each contest providing its own special ingredient to what made that season and that team so special. The Penn State game provided the hope, the Purdue game provided the drama, the Minnesota game provided the moment and the Michigan game, well, the Michigan game provided the confidence. The Hawkeyes were back.

First, from our good friend TheHawkeyeHistorian:

And then if you're bored at work/schoo/home, how about watching entire game courtesy of armysaber

Personal memories: I was an alright musician back in high school to the point where I auditioned with other classmates for the Iowa All-State music festival. There were thousands of sopranos, altos, tenors and basses packed into a high school gymansium, practicing their pieces and waiting for the time to audition. I, on the other hand, was with about 20 other people in the school commons area watching this game on one of a number of televisions. I never was an all-state musician, but I still maintain I made the right choice.