The Saddest Sight at the Minnesota State Fair

Share All sharing options for: The Saddest Sight at the Minnesota State Fair

Every year since I moved up to Minneapolis, I've made the same pilgrimage around the end of August and headed to the Minnesota State Fair, the self-proclaimed "Great Minnesota Get-Together." Mainly it's an excuse to engage in all manner of gluttony (this year I was able to feed my poutine obsession and sample chicken-fried bacon; I'm pretty sure each bite of the latter lopped another six months off my lifespan), gawp at the people in attendance (if people-watching was a sport, state fair people-watching would be its Olympics), and take in a little timbersports competition (bad puns, ax throwing, and chainsaw-play? I'm in!).

But seeing as I live in the belly of the beast, I also make a point of checking out the Gopher exhibit; keep your friends close and your enemies closer and all that. Lately, though, those trips have had a bitter aftertaste. All because of one bronzed pig being held against his will in this arctic hellhole. I mean, just look at Floyd in captivity: 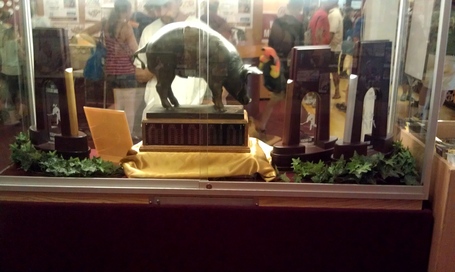 Doesn't he look miserable? Can't you see the anguish he's living under -- the anguish he's been living under day after day for almost two years now? It's enough to break your heart. My greatest hope is that I'll return to the Minnesota State Fair next August... and there will be no Floyd for me to gaze at wistfully. Please, Iowa: free Floyd. Save him from this glassy prison.

(To add insult to injury, they were playing highlights from last year's Minnesota-Iowa game as I walked over to the Floyd statue. I really wanted to throw my phone through the screen.)

Floyd aside, though, Minnesota also had some other trophies on display at their exhibit this year. (Apologies for the vertical orientation; it was late and I was tired.) 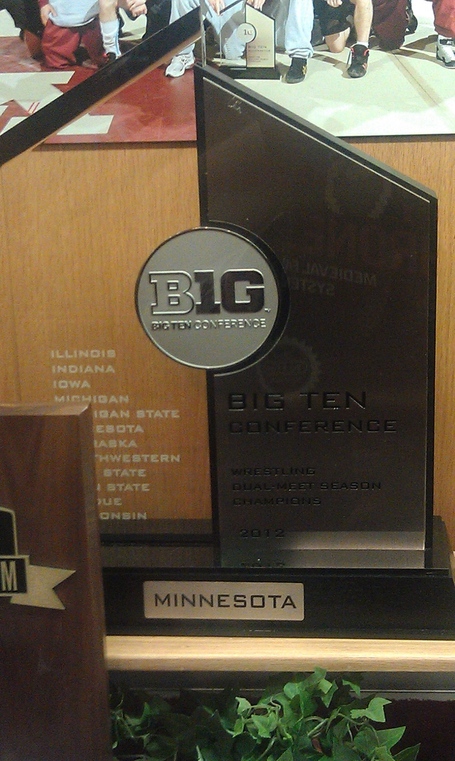 Turns out you actually DO get a trophy for winning the regular season Big Ten dual meet title in wrestling. If they've been giving these trophies out all along, I assume there's a whole closet full of them somewhere in Carver-Hawkeye Arena.

This is the trophy Minnesota picked up for winning the NWCA National Duals/Mat Mayhem tournament this year. It's, um, a little on the plain side. Honestly, I got a better-looking plaque at the Iowa state debate tournament when I was in high school. We can do better than this, right, NWCA?

On the other hand, there was one trophy on display that looked impressive. This is the MacNaughton Cup, the trophy awarded to Minnesota for being the regular season champion of the WCHA (Western Collegiate Hockey Association). Say what you will about hockey, but they do trophies right. Honestly, screw the diminution of rivalries like Minnesota-North Dakota or Minnesota-Duluth; not getting to compete for this beautiful trophy might be the biggest casualty of Minnesota's move to the Big Ten in hockey.