Kirk's Works: Counting Down the Top 25 Wins of the Ferentz Era - Number 5

Share All sharing options for: Kirk's Works: Counting Down the Top 25 Wins of the Ferentz Era - Number 5 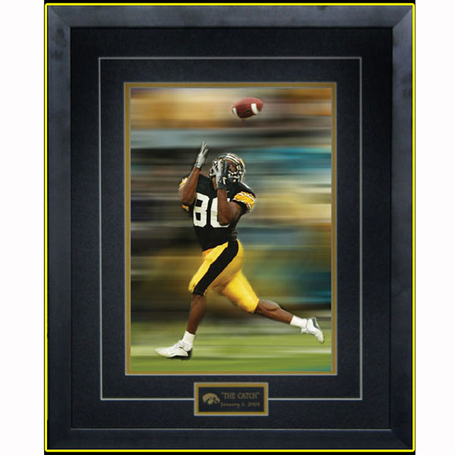 WHAT THE HELL JUST HAPPENED? The Catch. The Magic City Miracle. Tate-to-Holloway. Call it what you like, but there's no denying that it's arguably the most memorable, remarkable, and improbable plays in the history of the Ferentz Era. To be sure, there have been other incredibly dramatic and memorable plays in the Ferentz Era -- "7 got 6" and Murray's field goal spring to mind -- but the sheer improbability and absurdity of this play gives it a little something extra. Those plays were typical plays -- a 7-yard slant route, a 31-yard field goal -- that are memorable because of their atypical contexts -- they were do-or-die plays that happened with little (or no) time remaining. Tate-to-Holloway was an atypical play -- a 56-yard quasi-Hail Mary*-- in an atypical context. It was completely nuts.

* I've never thought the play should really be called a Hail Mary. A true Hail Mary seems to be when the quarterback just heaves the ball downfield into a jumble of receivers in or near the endzone and hopes that one of them can come down with it. That wasn't what happened here. Iowa ran an actual play, Holloway got open (thanks to a defensive breakdown by the LSU secondary), Tate saw him and threw the ball, Holloway caught it and ran into the endzone. It was definitely a slightly miraculous play, but it wasn't really a Hail Mary.

But this win was not all about The Catch, as wonderful as that play was. This was also one hell of a game. For sheer entertainment value and back-and-forth drama, there are few games in the Ferentz Era that can match it, let alone top it (although a few of those games that can at least match it are coming up in this countdown). In many ways, it was a quintessentially Ferentzian game, especially of the '02-'04 period: the offense came out hot (touchdown drive on the opening possession) then sputtered, the defense was beastly (although they faded late; grab a lead and hold on for dear life was a popular strategy in several Iowa games of that period, especially in 2004), and the Iowa special teams made game-changing plays (in a good way). Oh, and toss in a little bad clock management for good measure, too.

But this game... this damn game, man. Calling it a roller coaster ride seems inadequate. Iowa scored on the opening possession of the game (courtesy Tate-to-Solomon, 2004's most reliable hook-up), then the offense went in a funk for the remainder of the half (Drew Tate threw interceptions on back-to-back possessions, which didn't help). But the defense beat the hell out of QB Marcus Randall and held LSU to just two field goals until a long touchdown run from Alley Broussard late in the half. The other thing Iowa had going for it in the first half? Special teams. LSU's missed an extra point after that Broussard touchdown, but more importantly Iowa blocked not one, but two punts in the first half. The second one was recovered by Sean Considine in the endzone for Iowa's second touchdown. MISS U, BLOCKED KICKS.

The third quarter was pretty much all Iowa and shortly into the fourth quarter, Iowa had opened up a 24-12 lead on the back of a Kyle Schlicher field goal and a Marques Simmons touchdown run. Things looked good for Iowa: the offense was finally clicking (sort of), and surely a defense as good as the one Iowa had that year couldn't piss away a 12-point lead in the fourth quarter, especially against two quarterbacks that looked as hapless as Marcus Randall (who was pulled due to injury) and Matt Flynn (the future backup to Russell Wilson), right? Right? Wrong. Enter: JaMarcus Russell.

Before he was a punchline for being one of the worst NFL draft busts of all time and synonymous with purple drank, JaMarcus Russell was a third-string quarterback at LSU. But his arrival in the game turned things on their head. The LSU offense started moving the ball at a great clip (it didn't help that the Iowa defense was starting to look a little gassed by that point), while the Iowa offense kind of lost the plot. Somehow, someway LSU found themselves ahead, 25-24 with 0:42 to play. A game that Iowa seemingly had in the bag a half-hour earlier was on the verge of slipping away. What looked like a worthy sequel to the previous year's Outback Bowl triumph -- another beatdown of a more-celebrated SEC opponent -- was fast turning into a nightmarish defeat that would no doubt linger for years.

And then... magic. Tate. Holloway. Dogpile in the endzone. Dolph going nuts. Iowa fans in the stands losing their shit. LSU fans looking like someone just kicked Mike the Tiger. Go Iowa Awesome.

HEROES: The usual suspects came up big in this game -- Drew Tate was 20/32 for 287 yards and 2 TD (with 2 INT), Clinton Solomon had 4 catches for 81 yards and the game-opening touchdown (funny how often he turns up on this list, considering that I doubt he would make many Iowa fans' lists of top 5 wide receivers of the Ferentz Era), Ed Hinkel was Mr. Possession Receiver (10 catches, 93 yards), and the defense was outstanding for three quarters (the Broussard touchdown run aside) -- but I think we should doff our caps to a man who caught only one touchdown pass in his entire Hawkeye career, but who picked the best possible time to make that catch. So thank you, Warren Holloway. This wonderful, incredible, insane play doesn't happen without you catching Tate's pass and scooting into the end zone. You will never be forgotten in Iowa City.

IMPORTANT? Yes. There's an argument to be made that bowl games aren't as meaningful as some regular season wins because they are, after all, just glorified exhibitions with nothing tangible on the line (except for the BCS National Championship Game). Even the Rose Bowl, for all its pageantry and hullaballoo, is just an exhibition. That's all true, but to me it's really just one side of the argument.

The reason this win was important is because it's one of the best examples you'll ever find of Why We Watch Sports. There are several reasons we watch sports (and I have no desire to discuss them all here), but one of the biggest reasons we watch sports is for the sheer random human drama of it all. We watch to be shocked, to be enthralled, to be excited about what might happen next. We watch in the hopes that we'll see something truly spectacular, something truly unique. We watch to see something memorable. The reason we sit through all the three-and-outs, all the punts, all the incomplete passes and no-yard gains is because there's always the hope that, on the next play or next series or next game, there will be something we've never seen before, or something so absurd or so incredible that it's something that we'll remember forever. That's what The Catch was (and is).

Sure, it was nice that Iowa won the game, finished with 10+ wins (for the third-straight year), and was ranked in the top-ten at the end of the season. That was all "important." But mainly this game was important because it was an incredibly exciting game -- and because it had The Catch. I watch sports to see unbelievable, remarkable things and to create memories -- and that's precisely what The Catch did.

Also, it inspired one of the greatest posts in the history of this blog, and that has to count for something, right?

PERSONAL MEMORIES: I wish I had a better story for this game. A game this epic demands it, but there's unfortunately nothing remarkable about my story. I watched it at home in the comfort of my living room. I remember being shocked at how well Iowa controlled the first three quarters of the game. I remember being aghast at how things all went to shit in the fourth quarter. I remember being disillusioned when LSU scored their final touchdown and, again, when Iowa's ensuing drive seemed to be heading nowhere. I remember being stunned at the clock ineptitude of the final play right before the ball was snapped. And then... then I remember nothing but sheer elation. I remember babbling in incoherent joy to several friends and family members on the phone. I remember vaguely wishing that I smoked, because that moment seemed like the perfect time to have a smoke. And I just remember thinking how amazing it was that Iowa was on the winning end of one of those insane, once-in-a-lifetime plays that get replayed over and over and over on sports highlight shows -- and how awesome that was.