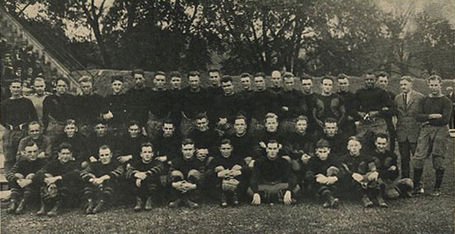 Previously, in the throwback series:

The 1921 Iowa team entered the season riding a three game winning streak dating back to 1920. Howard Jones entered his sixth season at the helm and his team made up of mostly Iowa born footballers finally became what many had hoped when they pushed for the hiring of a new coach. The 1921 team played a seven game schedule that began on October 1st.

The first opponent was Knox College of Illinois. It was a mismatch on the field and a good warmup game for the Hawkeyes as they faced Notre Dame the following week. Iowa defeated Knox 52-14. Gordon Locke rushed for four touchdowns and Aubrey Devine had one. Devine also kicked a field goal and added five extra points.

Iowa's second game was the first ever meeting between Iowa and Notre Dame. The Irish entered the game at Iowa City riding a 20 game win streak and led by famous coach Knute Rockne. The Irish switched from their Navy uniforms to don a green jersey for the first time in their history. The Hawkeyes struck first with a touchdown from Gordon Locke. Later, Aubrey Devine added a field goal that proved the be the winner. The Irish added a touchdown and threaten late in the game but Iowa held on to win 10-7.

Next, Iowa opened conference play with a home game against Illinois. The Illini had a cupcake opener against South Dakota and defeated them handily, 52-0. The Hawkeyes were led by Gordon Locke who rushed 37 times for 202 yards. Locke scored both touchdowns on the day and the Hawkeyes went on to a 14-2 victory. Perhaps, it was the first appearance of the famous AIRBHG. Following the fine performance, Locke suffered from an illness that hospitalized him and bothered him the rest of the 1921 season.

Iowa's next game was its first road trip as the team traveled to West Lafayette to face Purdue on a rain soaked field. Purdue had a lousy season and was 0-3 entering the game with Iowa. Purdue lost to Wabash, Chicago and Notre Dame by a total of 51-0. That's right, they hadn't scored yet on the season. They scored against Iowa and both teams were locked in a 6-6 tie when Aubrey Devine returned a punt for a game winning touchdown. Devine scored both touchdowns on the day and added one extra point to account for all of Iowa's 13 points in the 13-6 win.

Next on the schedule was another road trip; this time to Minneapolis.The Gophers had an up-and-down season and were 3-2 entering the game with Iowa. Minnesota lost the previous week to Wisconsin 35-0. The Hawkeyes poured it on the Gophers scoring the most points against Minnesota to that date. Aubrey Devine totaled 484 yards and six touchdowns. He rushed for four scores and 162 yards and added 122 yards and two touchdowns through the air. He also kicked five extra points and had 200 yards returning kicks. Iowa pounded the Gophers 41-7 to improve to 5-0 on the season. Devine accounted for all of Iowa's 41 points.

The Hawkeyes returned to Iowa City for their final home game of the year. The Hoosiers Indians started the season 2-0 after wins against mighty Kalamazoo and Franklin. Indiana lost three in-a-row against Harvard, Minnesota and Notre Dame. Iowa would again score 41 points and hand Indiana their worst loss since 1914. The Hawkeyes pitched a shutout and were again led by Devine who had 183 yards rushing and 102 yards passing. Devine scored four touchdowns in his final game on Iowa Field.

Iowa was 6-0 going into the final game of the season against a 1-5 Northwestern. jNW's only win of the season came when they defeated Depaul 34-0 and it was the only 34 points they scored on the season. Northwestern was shutout in five of six games before this final season match-up. Iowa only scored 14 points but for the second consecutive week shutout their opponent.

Remarkably, Iowa never trailed once in their seven games in 1921. After allowing 14 points to Knox in the season's first game, Iowa didn't allow an opponent to score in double digits. They were a candidate to face California in the Rose Bowl but Big Ten rules didn't allow post-season play. Parke H. Davis would declare Iowa, along with Cornell and Lafayette 1921 National Champions.

We've profiled the stars of the 1921 team. There were others that received honors. John Heldt, Chester Mead and Max Kedesky were named all-Big Ten. Kedesky played one year of professional football at Rock Island. Guard Paul Minick played three years in the NFL for Buffalo and Green Bay.